All You Need to Know About Photography at Hvitserkur in Iceland

Rising like a prehistoric sea monster from the sea at the Vatnsnes peninsula in northwest Iceland is the massive basalt monolith Hvítserkur, one of the north's most distinct and photogenic natural attractions. Its distinct shape is the result of the natural sculpting caused by sea and weather erosion.

The rock is white in colour, wherefrom it gets its name. The word Hvítserkur actually translates to “white shirt" and describes the excrement of the birds that have tarnished the rock, particularly fulmar and sea gulls as well as the Arctic terns, who nest there and in the surrounding area.

Legend has it that the rock is indeed a troll that was turned to stone by the rays of the sun. Some think that it resembles a dragon, or even a dinosaur, taking a sip of water from the ocean below. Whatever this large sea stack may resemble, it makes for truly stunning landscape photography, set against the spectacular scenery all around. It's also not the only thing that you'll be able to photograph in the area, as many seals may be spotted bobbing about in the water and even lounging around on the rocks down by the shore!

As it often gets very windy down by the coast, it's important to have a tripod to help you minimise camera shake while you photograph Hvítserkur. You can also handhold your camera though it can make things a little bit more difficult.

Your settings will vary depending on the conditions when you are there but in general, you'll want to set your aperture to somewhere between f/11 and f/16 to ensure front-to-back sharpness and well-focused shots. Your shutter speed will depend largely upon the look that you want to achieve. To capture the scene as it is, try a faster shutter speed, such as 1/125 or 1/160th of a second. For long exposure effects, try a slower shutter speed that will allow you to capture motion in the sky – anywhere from 30 seconds to a few minutes.

Using a tripod means that you'll be able to adjust your ISO as low as it can go. This is the best option for reducing the risk of image noise. Most cameras will allow you to dial in the lowest ISO setting at around 50 to 100. However, if you will be handholding your camera for the shot, then it's best to use a higher ISO from 400-800. Depending on the lighting conditions, you may need to increase your ISO even higher if necessary.

How to Compose a Photo at Hvítserkur

There are many different ways that you can compose Hvítserkur, though it looks best with something to anchor the frame in the foreground. As such, look for interesting foreground elements, such as patterns in the sand that may catch reflections with a light layer of water, tree branches or even mossy rocks.

Although most photographers will try to compose the rock stack in such a way that it resembles a drinking dinosaur, you can also photograph it from different angles for more a more unique take on the scene. Try placing your camera at different heights and angles, which will offer completely different viewpoints of this iconic location.

If the tide is high when you visit, then the best vantage point of Hvítserkur will be up from the viewing platform. Long exposure shots work well from there, particularly when the clouds draw interesting formations in the sky. If you visit Hvítserkur during low tide, then you'll have a great view of the sea stack rising out of the water like a drinking dragon.

The Best Times to Photograph Hvítserkur

This incredible rock stack on the Vatnsnes Peninsula is picturesque during any time of the year. Although it is a well-known landmark, you'll rarely see people around during the early morning or late afternoon. However, it can be very popular in the daytime, attracting crowds of tourist buses. As such, it's best to visit for the purpose of landscape photography either at the beginning or the end of the day.

On a clear, sunny day it is amazing to see Hvítserkur surrounded by the sea. However, this kind of light is not conducive to photography here. The trick to capturing the perfect photo of it is to get there at the right time, when the rock stack is lit up by gorgeous light. It's best to wait for sunset, when the colours in the sky reflect upon the sand and bathe the area in a warm glow. 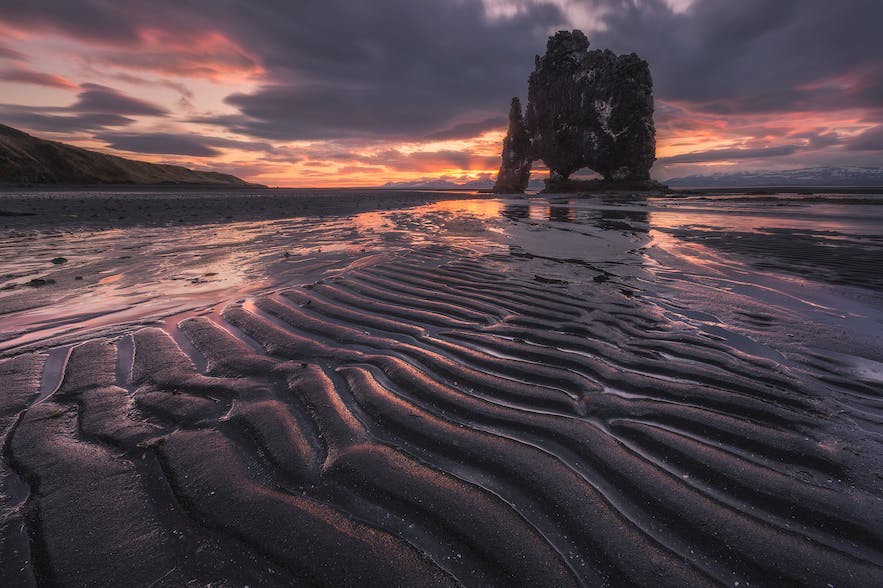 Patterns in the Sand at Hvitserkur. Photo by: 'Iurie Belegurschi'.

Photography at Hvítserkur in Winter

During winter, Hvítserkur is particularly beautiful during sunset. When the entire beach is swathed in a blanket of pure white snow, including the rock stack itself, it makes for truly enchanting scenes. Once the light fades completely and gives way to blue hour, the rock stack can take on an eerie, gloomy atmosphere.

If you'll be visiting Hvítserkur in winter, keep in mind that the path down to the beach can be dangerous and slippery. For your own safety, wear crampons and if in doubt, take the longer way down if necessary.

Photography at Hvítserkur in Summer

Perhaps the best time to photograph Hvítserkur is in summer, when Iceland experiences the phenomenon known as the Midnight Sun. With endless hours of golden light, the beautiful beach that this rock stack stands on becomes a bit of a photographer's playground. You can take your time, exploring all of the patterns and textures to be found in the sand. You'll most likely even have the beach to yourself, as most people will be asleep during this time.

The weather in Iceland can be unpredictable and finicky, so it's best to revisit Hvítserkur in different conditions and to photograph it beneath the changing light. Depending on when you visit, the atmosphere can be completely in contrast with how you may have photographed it before. For more unique photos of this rock stack, try shooting just as a storm rolls in, to create truly dramatic and moody shots.

As you can expect, Hvítserkur is a magical place to capture the Northern Lights dancing quietly and colourfully across the Arctic sky. However, if you plan to shoot the Aurora here, then you'll need to be very careful making your way down onto the beach at night. Make sure that you're aware of the movements of the tides and that you wear a headlamp, so that you can see what you're doing as you scramble down the cliff in the dark.

Due to this monolith's location, it's not an easy place to get to for Northern Lights photography if you'll be basing yourself in Reykjavík for the duration of your stay. However, if you're on your way up towards the north with nothing around for miles, then it's the perfect midpoint location for a Northern Lights stop.

For your best chances to see the Northern Lights dancing over Hvítserkur, it's best to visit during autumn, spring or winter in Iceland, when the skies are dark enough to highlight the display. There is no use trying to photograph the Northern Lights over Hvítserkur in summer, as the country will experience close to 24-hours of daylight, making it impossible to see the Aurora in the sky.

How to Get to Hvítserkur

Although there is not a great deal else to see around the area, Hvítserkur is a great stop to make during your trip to the north, particularly if you are an avid photographer. It will be somewhat on your driving path anyway, so it's worth a stop, albeit a bit of a detour from the main road.

To access Hvitserkur, you can either take a gravel road from Hvammstangi or road 711 off the Ring Road. The road to reach this sea stack is gravel and can be rather bumpy. However, you will be treated to many Icelandic horses, grazing in the surrounding fields. You'll know you've arrived when you reach a well-marked, free car park with a table and several benches where you can rest.

From the parking lot, you can easily access spectacular views of Hvítserkur. There are two paths down to the rock formation itself. One path leads towards a viewing platform, whereas the other leads down onto the beach. If you choose to go towards the viewing platform, you'll be able to see Hvítserkur and the surrounding beach in all its glory, with sweeping vistas all around.

Right next to the viewing platform is a path down to the beach, which is steep and can be slippery when wet. Climbing down offers the best vantage point for photography, especially if you'll be getting down low to capture the patterns in the sand with a wide angle lens. However, the beach will only be accessible during low tide and the track can be difficult to negotiate. 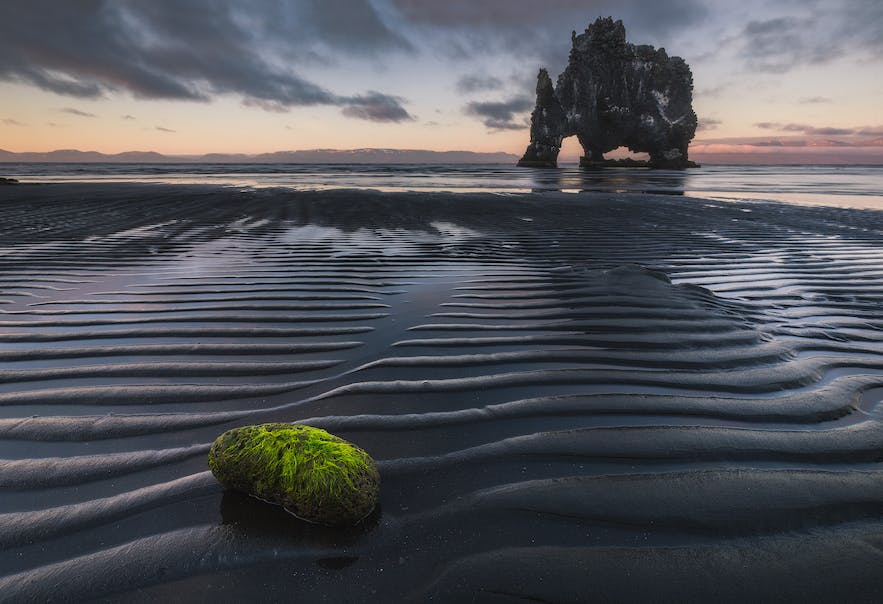 If this path is too steep, then head back towards the carpark and take the alternative route, which will get you down to where you want to be with a leisurely stroll along the beach. This path may be longer, but you'll have wonderful opportunities to photograph seals hauled out upon the surrounding rocks.

What Else is There to Shoot Around Hvítserkur?

Let's face it – Hvítserkur is quite a bit of a detour if you'll be travelling around Iceland, so you'll probably want to shoot some other things along the way. Luckily, the Vatnsnes peninsula is quite mountainous, adding further to the scenic appeal.

There are lots of seals to photograph in the area, particularly around Hindisvik and Osar. Meanwhile, the nearby town Hvammstangi is a seal center, and is well worth a visit.

If you'll be spending some time on the Vatnsnes peninsula, then we highly recommend that you visit the natural fortress basalt columns called Borgarvirki, where there will be even more opportunities for great landscape photos in Iceland.

Take the hassle out of planning your trip around Iceland. Join one of our multi day photography workshops and tours that will get you to all of the best places at the right times for spectacular landscape photography.