With its dramatic and largely untouched Arctic landscape and immensely scenic viewpoints, Lofoten is arguably one of the best locations in the world in regards to photography. Adding the midnight sun and Northern lights into the equation, visiting this archipelago should be a no brainer for not only every photographer, but for every person with the almost insatiable travel bug-syndrome.

Geography of the Lofoten Islands

Lofoten is located at the 68th and 69th parallels north of the Arctic Circle in Northern Norway.

History of the Lofoten Islands 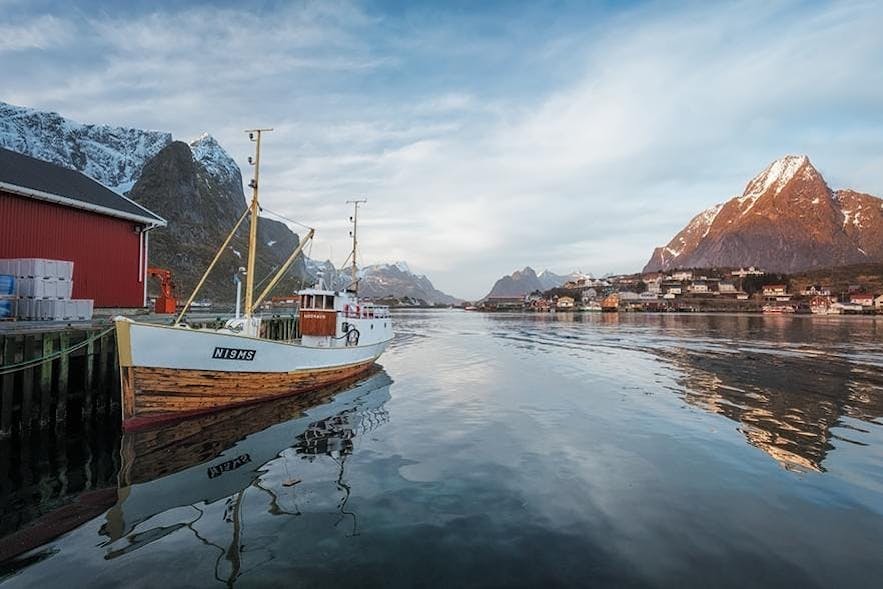 The history of Lofoten dates back 6000 years. Photo by: 'Stian Klo'.

There is evidence of human settlement dating at least 6000 years back. The first Stone Age inhabitants survived on fishing and hunting, and the land provided good living due to its rich soil and wildlife.

All of Lofoten was actually covered with birch and pine woods, and there were a variety of animals roaming freely around; bears, deer, wild reindeer, lynx beaver – and the sea was full of fish, seals and whales.

Agriculture developed early, and grain was harvested as early as 4000 years ago. During the great Viking Age, several large chieftain seats emerged. In Borg (Vestvågøy), archaeologists uncovered the largest Viking banquet hall ever found worldwide. The construction was 8,5m wide and 83m long. A reconstruction, the Lofotr Viking Museum at Borg, was built in 1995.

Climate of the Lofoten Islands 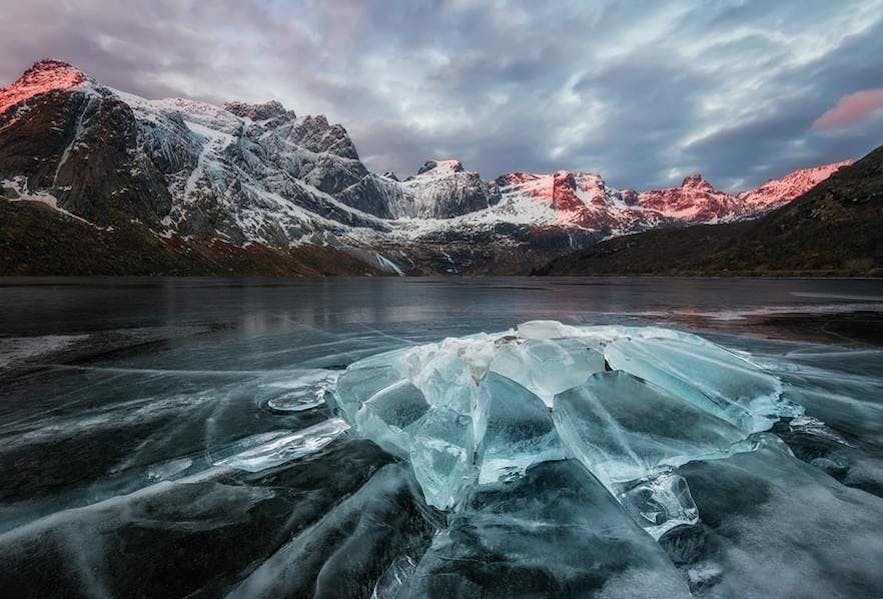 Lofoten has a mild climate. Photo by: 'Stian Klo'.

Lofoten has a much milder climate than other parts of the world at similar latitude, such as Alaska and Greenland. This is due to the temperature of the water of the Gulfstream.

The coastal climate results in mild winters and cool summer temperatures. Traditionally, January and February are the coldest months with an average temperature of -1 degrees Celsius.

July and August are the warmest, with an average of 12 degrees Celsius. During summer season, it can be 30 Celsius and all blue skies, or 5 Celsius and nothing but rain and fog for weeks. Don’t be surprised to see the temperature drop down as low as -20 Celsius at winter, with howling winds and several meters of snow – not very pleasant considering there’s only about 1-2 hours of daylight in December, but at the same time very very charming. 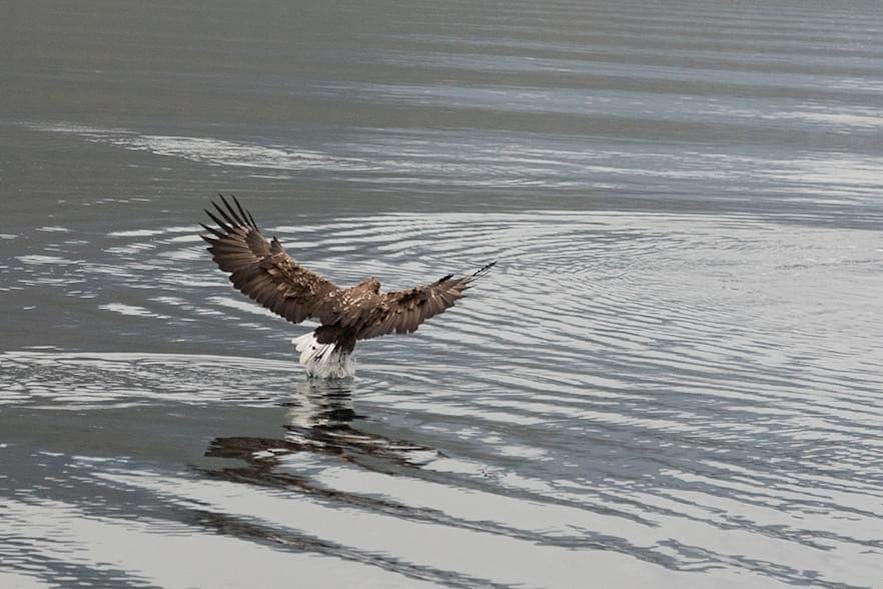 Lofoten is a great place for fishing! Photo by: 'Stian Klo'.

Strong winds can occur in late autumn and winter. Snow and sleet are not uncommon in winter, the mountains can have substantial amounts of snow, and avalanches might come crashing down. In fact, two of the top ten deadliest rainstorms known to mankind passed through Lofoten.

Lofoten is one of the few places on earth that actually looks good in all kinds of weather, and if there is one thing there’s plenty of, it’s weather.

The Arctic Ocean is rich with life, and the world’s largest deep water coral reef, Røst Reef, is situated just west of Røst. Lofoten is one of the world’s best places for fishing cod, pollock and halibut – and Northern Norway is the cod “capital” of the world. Imagine catching 20-30 kilo cod – quite the experience. In addition to the sea, Lofoten has a very high density of sea eagles, cormorants, guillemots and puffins.

The Mountains of Lofoten Islands 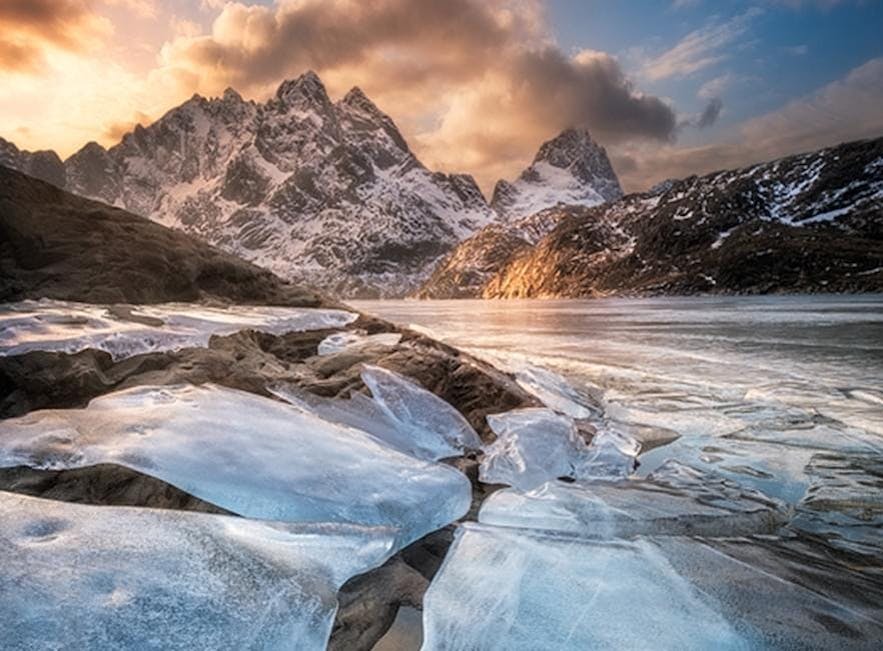 The Lofoten Islands are famous for their huge mountains. Photo by: 'Stian Klo'.

Lofoten is world famous for it’s huge mountains and jagged peaks, and is actually a row of very mountainous islands. The inland of the islands are scorned with many sharp peaks, at altitudes between 500 and 1000 meters.

The Beaches of Lofoten Islands 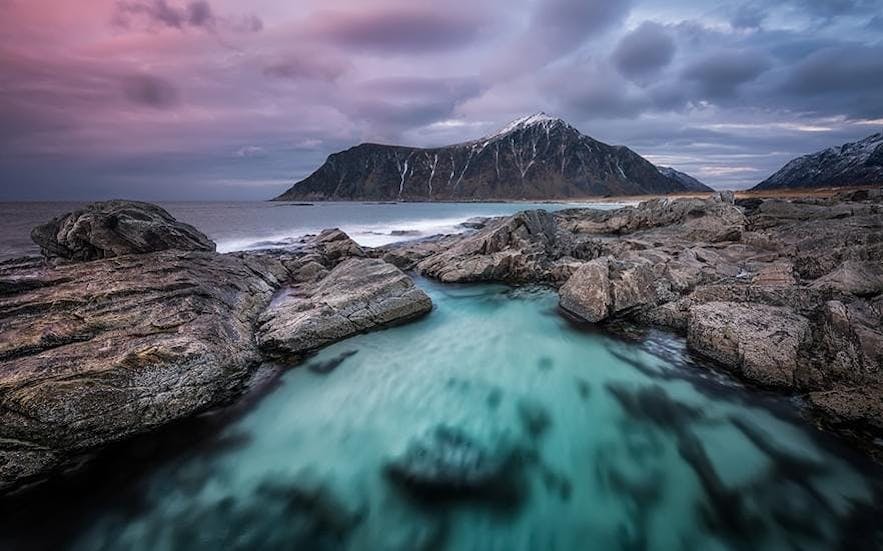 The beaches in Lofoten are stunning. Photo by: 'Stian Klo'.

Experience the white sandy beaches of Haukland, Utakleiv, Ramberg, Rørvika and Skagsanden – or the pebble stoned beaches at Unstad and Eggum – all hugely popular tourist spots for experiencing the midnight sun or even surfing, and easy accessible by car.

Other famous beaches, and ones that require some degree of hiking, include Kvalvika, Horseid and Bunes. All of these are tailor made for creating gorgeous landscape photos. 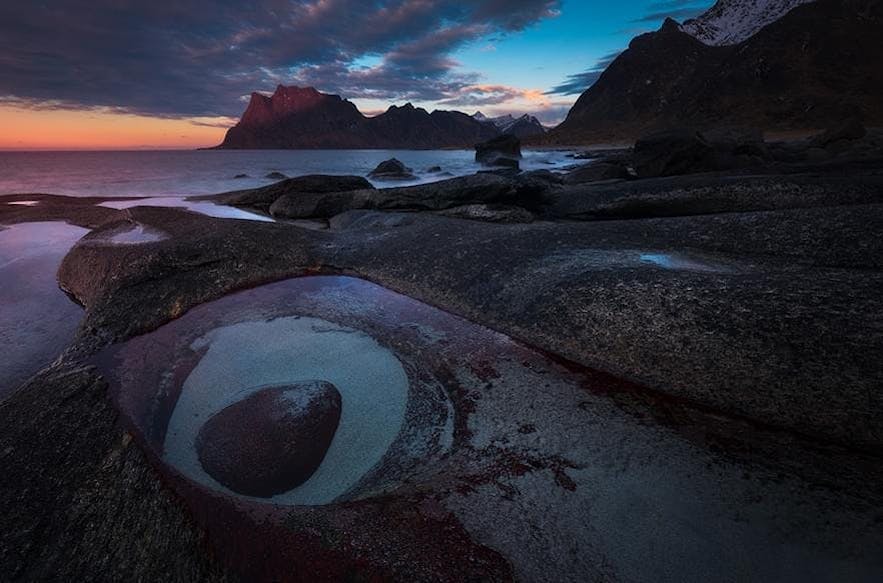 Utakleiv is one of Lofoten's most beautiful beaches. Photo by: 'Stian Klo'.

The Village of Reine 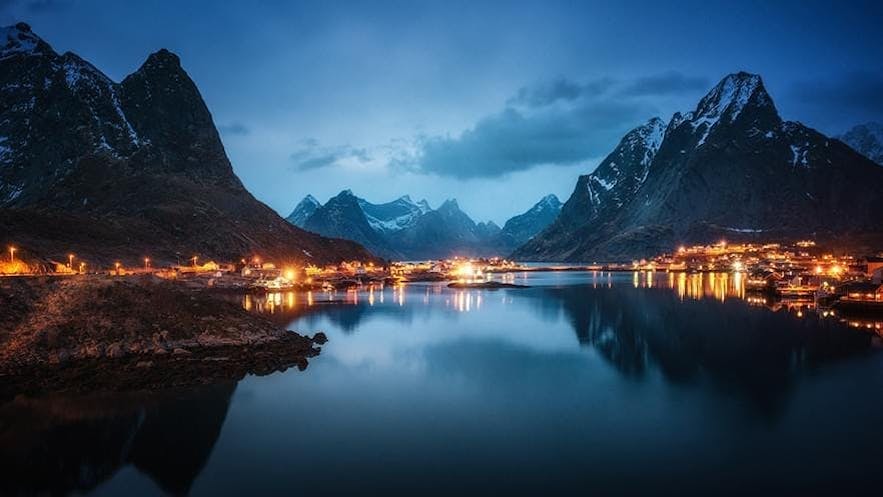 Reine in the evening. Photo by: 'Stian Klo'.

The village of Reine, Lofoten Islands in Arctic Northern Norway, has been voted as one of the most scenic villages in the world by none other than National Geographic.

And it doesn’t stop there, as even The Guardian, The Huffington Post and The New York Times portrays this archipelago as one of the most spectacular groups of islands in the entire world. Lofoten in general is every photographer’s wet dream, and Reine is the very cherry on top. 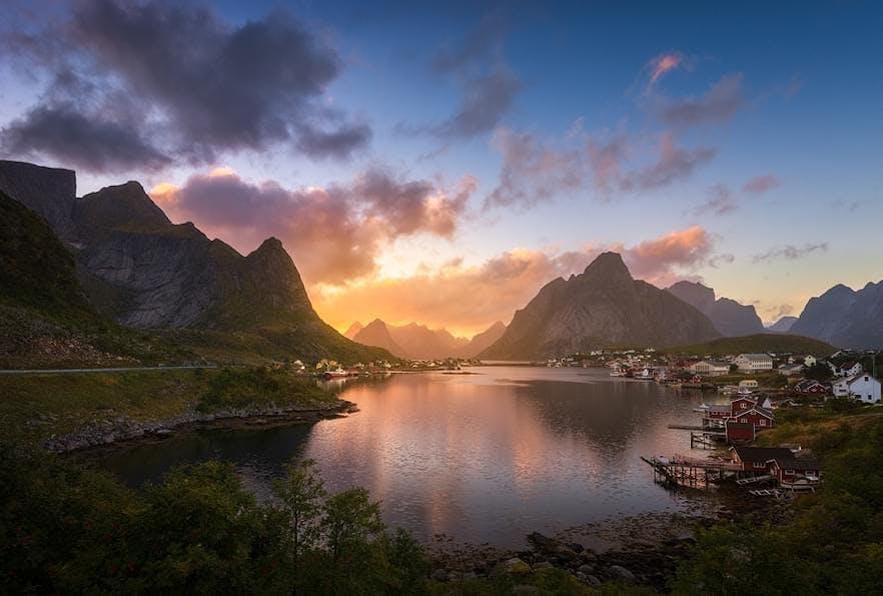 Reine is beautiful any time of the year. Photo by: 'Stian Klo'.

Reine is situated at the mouth of Reinefjorden in the municipality of Moskenes in the western part of Lofoten, wedged in between jagged mountains, colorful fjords and rocky shorelines. The village has approximately 400 inhabitants, and is actually one of very few villages in Lofoten where you still find a thriving fishing community.

The Mighty Trollfjorden in Lofoten Islands

One of Norway’s magical highlights is the mighty Trollfjorden. Imagine a narrow and dark fjord surrounded by jagged peaks and impenetrable mountain walls – and best of all, it’s only accessible by boat.

It’s actually only 3km long and about 70m wide, but the sheer WOW factor of this fjord is unmatched. If you measure sense of drama per meter, there are very few locations that can compete. 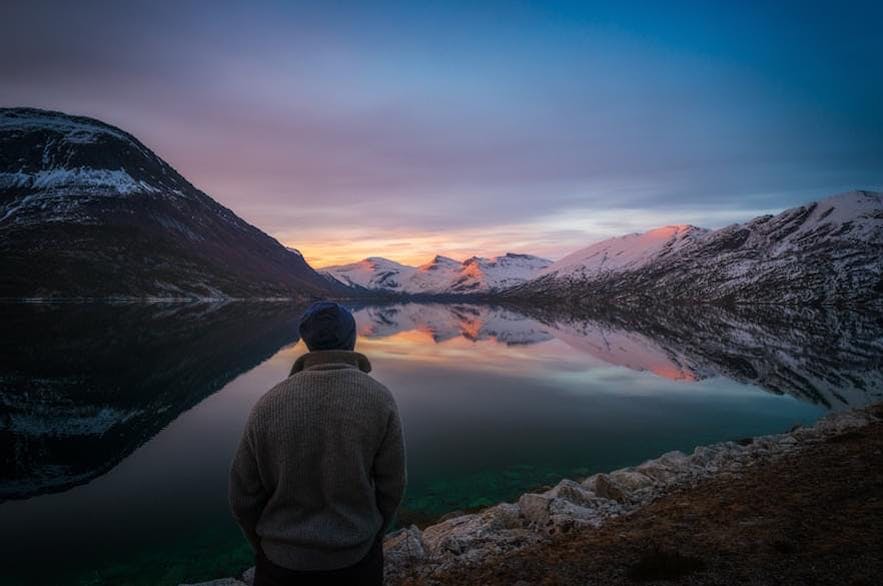 The Viking House at Borg

In the late 1980’s an excavation uncovered the largest house in the Viking world, in Borg outside Leknes in Lofoten. The house is now reconstructed and is open for visitors. The 83-metre house had been divided into 5 main rooms.

After the excavation the foundation walls were marked out, to show where the house stood. This is very visible for visitors today. 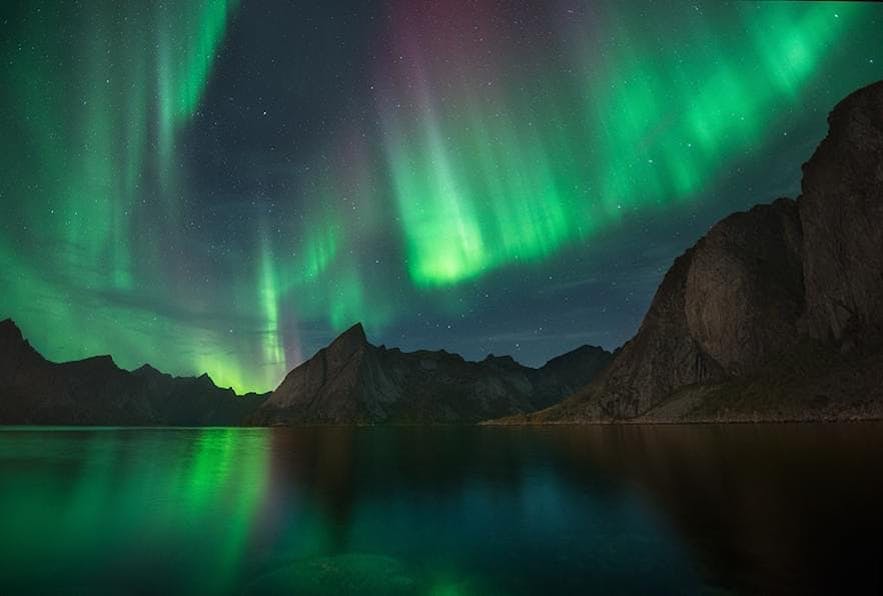 Lofoten is a great place to chase the Northern Lights! Photo by: 'Stian Klo'.

The Aurora Borealis is one of the greatest natural wonders in the world, and there really is no better place to see this phenomenon than in the mountain wonderlands of Lofoten. The prime period for seeing the lights is between September and April.

This is not due to the Auroral activity, but simply a matter of having dark enough skies for the aurora to be visible. Auroral activity is largely dictated by solar storms and when a large solar storm arrives, get ready for the show of your life. 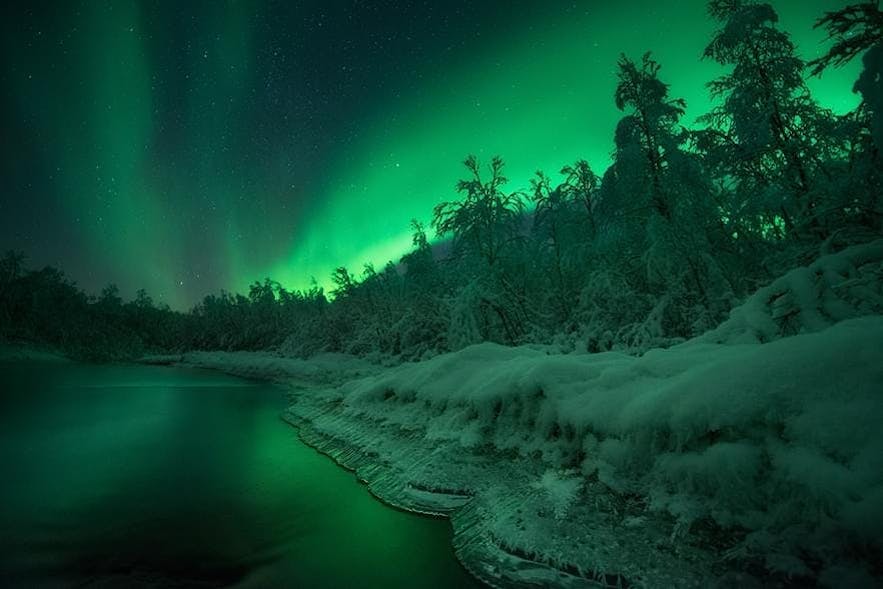 The prime time to photograph the Northern Lights in Lofoten is between September and April. Photo by: 'Stian Klo'.

From late May to mid-July the sun doesn’t set. It just rolls low on the horizon for hours. Photographers know to make use of this golden light and visitors are stunned by the golden daylight at midnight. Going for a nightly stroll under the midnight sun in Lofoten is something very special. 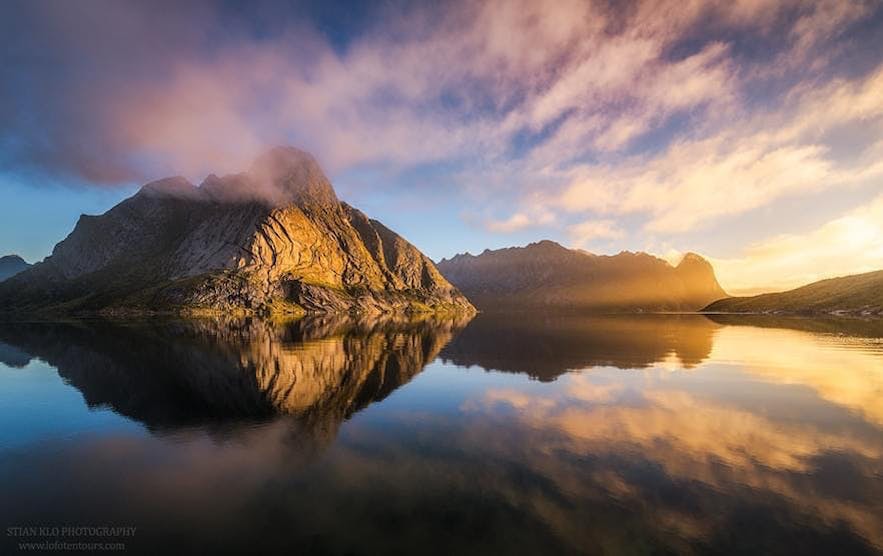 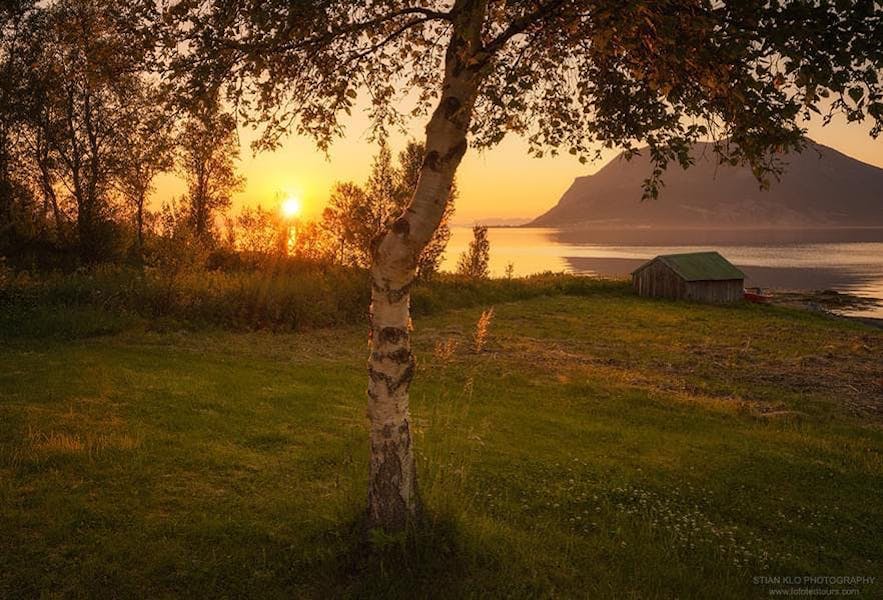 Going for a stroll in Lofoten beneath the Midnight Sun is something special. Photo by: 'Stian Klo'. 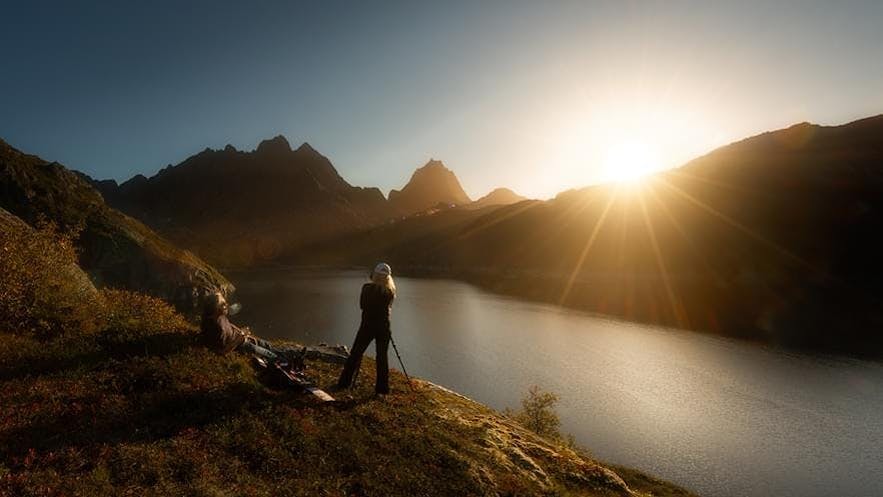 Hiking in the Lofoten Islands. Photo by: 'Stian Klo'.

Lofoten is every hiker’s paradise. The mountains are world-famous and spectacular. They may look unhikeable, but there are many well-marked hiking trails snaking their way around, below or over the mountains.

There are several tourist cabins that are open for visitors, making it possible to hike from cabin to cabin in the most beautiful mountain terrain imaginable. 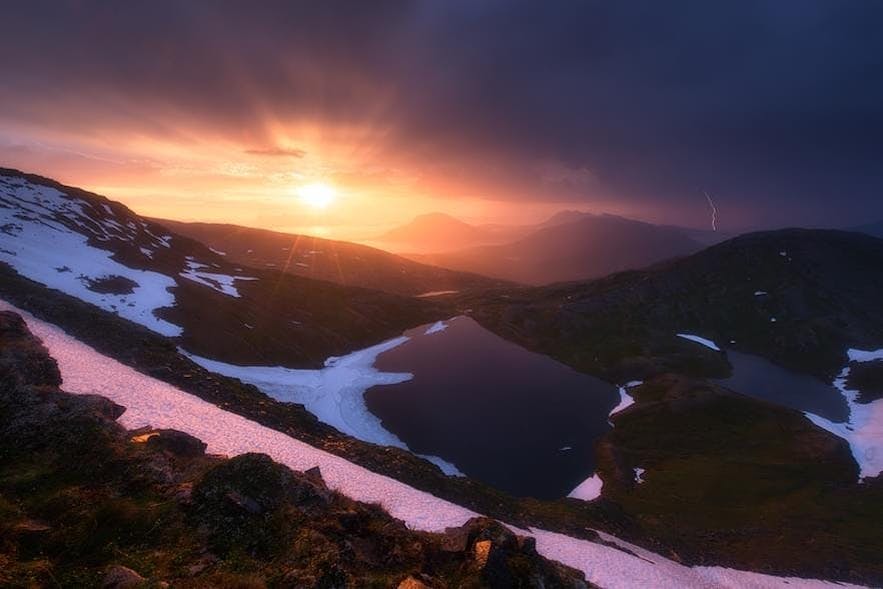 Lofoten is full of hiking trails to vantage points like this. Photo by: 'Stian Klo'.

Rorbu is a traditional type of seasonal house used by fishermen, and you will find these houses all around Lofoten. The buildings are built on land, but with the one end on poles in the water, to make for easy access for boats.

The use of the rorbus for fishing has diminished and the style of housing is now largely used to rent out to tourists. Waking up in a rorbu hovering over the sea and looking towards the mountains is surely an experience to remember. 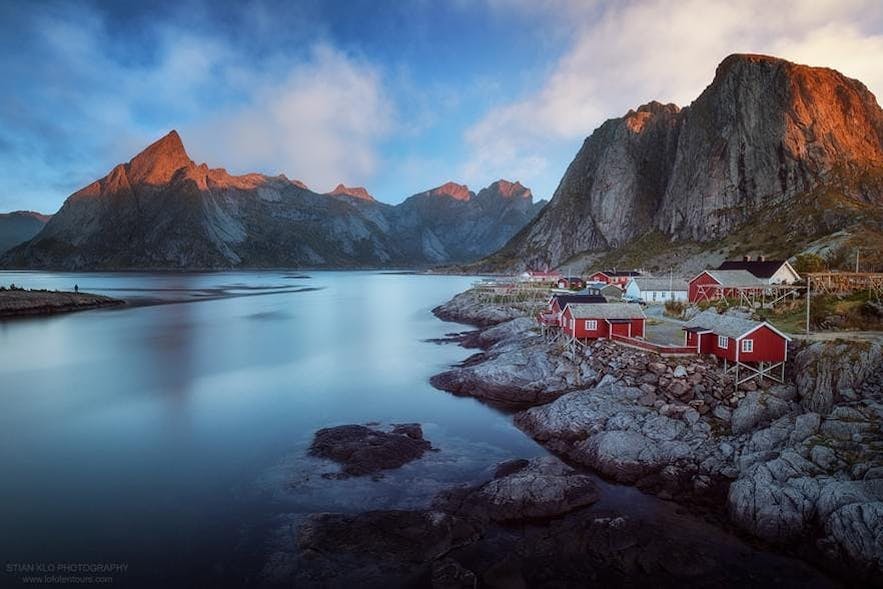 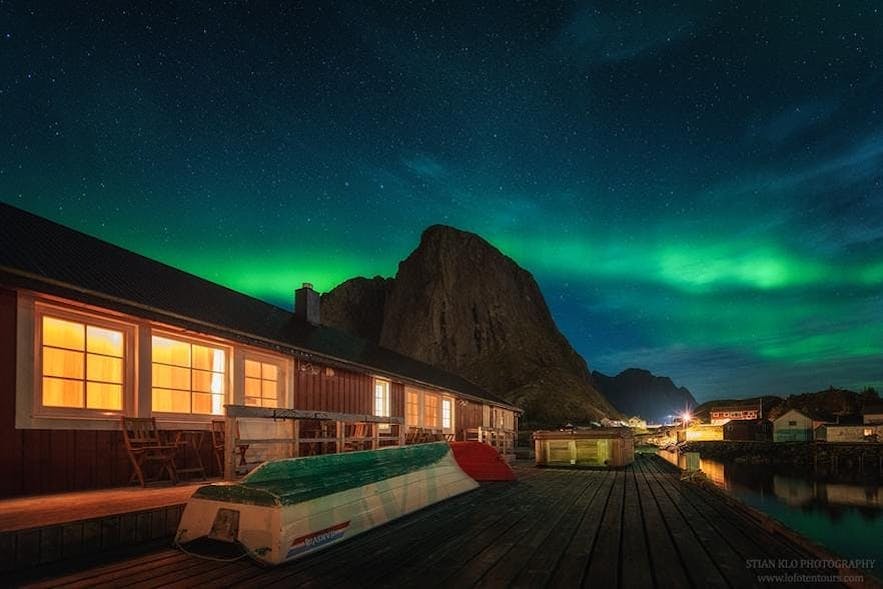 You can stay in these rorbus AND photograph them at night! Photo by: 'Stian Klo'.

Breathtaking, empty and open to Arctic swells, Lofoten’s west coast is a rare treat for surfers. For the last 50 years there have been surfers at Unstad bay. Surfing in Lofoten islands means surfing in thick wetsuits. During summer they usually use a bit thinner suites.

The average water temperature is around 8 -14 Celsius, both summer and winter due to the gulf stream current. 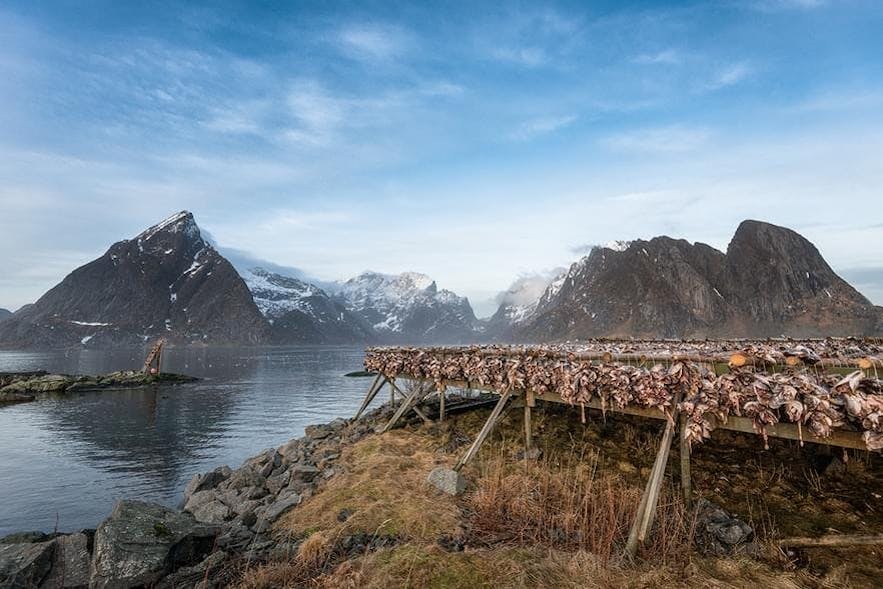 Fish drying in the air. Photo by: 'Stian Klo'.

Stockfish is unsalted fish, especially cod, dried by cold air and wind on wooden racks on the foreshore, called “hjell”. The drying of food is the world’s oldest known preservation method, and dried fish has a storage life of several years.

The method is cheap and effective in suitable climates; the work can be done by the fisherman and family. Visitors will notice the characteristic smell immediately.

Getting to the Lofoten Islands

As mentioned previously, Lofoten is located at the 68th and 69th parallels north of the Arctic Circle in Northern Norway. The easiest way to travel to this archipelago is via any international airline to Oslo Gardermoen airport (OSL code).

From OSL you have two choices, either you fly to Harstad/Narvik Evenes airport (EVE code), pick up a rental car and drive about 4 hours to Lofoten – or you can simply fly via Bodø airport (BOO code) and connect with another flight to Leknes airport (LKN code).

The latter solution puts you smack in the middle of Lofoten, and you can easily rent a car at the airport and start your Arctic adventure. Domestic flights in Norway can be purchased from either www.sas.no, www.norwegian.no or www.wideroe.no.

So you’ve booked your photography tour to Iceland, but did you know that you’ll have opportunities to photograph much more than just the sensational landscapes? While the stark, volcanic environment...