Secure your place on this grand 2-day photo tour taking you from Iceland's capital, Reykjavík, all the way along the South Coast to Vatnajökull National Park and Jökulsárlón glacier lagoon.

We'll stop on our way to photograph two of Iceland´'s most famous waterfalls, Seljalandsfoss and Skógafoss. Both falling sixty metres, you can walk behind Seljalandsfoss for epic photographs and new perspectives, and hike on top of Skógafoss to get the best pictures possible.

The main focus on this tour will be Vatnajökull National Park, specially Jökulsárlón glacier lagoon, known otherwise as "The Crown Jewel of Iceland".

At Jökulsárlón, huge blue icebergs fluctuate towards the river mouth along with the tide. Ice cubes and crystals are then washed ashore at Diamond Beach, creating a photographer's paradise.

During wintertime, when the days get shorter, there will be the chance to hunt for the Northern Lights. There is nothing more impressive than capturing them with these astonishing floating icebergs in the foreground.

Small groups make this photo tour flexible. This means that your professional photography guide can spend the time you need to help you get the best photos.

Accommodation is not included, but we can help you find the best prices and places to stay. Don't miss this unforgettable experience photographing some of South Iceland's most beautiful attractions. Check availability by choosing a date. 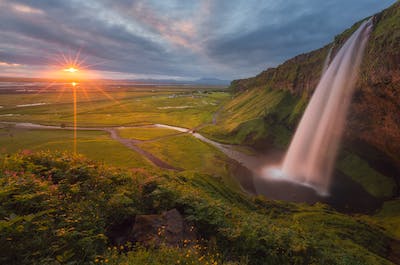 Day 1 - Waterfalls of the South Coast&nbsp;

The waterfall Seljalandsfoss is one of the most famous sights when travelling the South Coast of Iceland. It is located just off the ring road, about 30 km from the area of Skógar, making it easily accessible to enthusiastic photographers.  The waterfall is narrow but tall, dropping 60 meters in a single cascade. One of Seljalandsfoss' greatest benefits is that you can walk behind it, a rare treat that offers excellent opportunities for photography.  Close by Seljalandsfoss is another waterfall, the 40 m high Gljúfrafoss (“Gorge-dweller”). As the name implies, it lies in a gorge and is somewhat of a hidden gem given the colossal cliff that covers it.  The next stop will be Skógafoss waterfall, another of the South Coast's famous natural attractions. This waterfall is wider than Seljalandsfoss and has an adjacent staircase beside the tumbling waterfall, allowing for different perspectives of the feature.  Next up is Svartifoss waterfall. This fascinating waterfall is located in Skaftafell Nature Reserve in Southeast Iceland, just a part of Vatnajokull National Park. Here, a dramatic contrast is created between the white water and surrounding dark hexagonal basalt columns—perfect for captivating landscape photography!  In the evening, you will stay at accommodation in the Vatnajökull National Park area.
Read more
Day 2 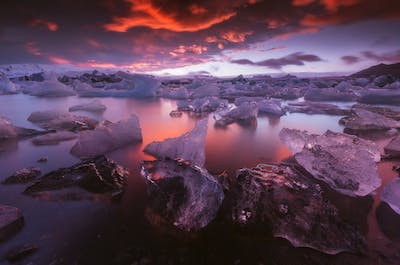 Your second day will be the mainstay of your adventuring, photographing one of the most beautiful spots in Iceland. The beautiful Jökulsárlón glacier lagoon belongs to the epic Vatnajökull National Park. The lagoon is filled with more than 300 massive icebergs of different shapes and sizes that break away yearly from Breiðamerkurjökull Glacier and drift towards the sea. Due to this ethereal atmosphere, the lagoon is known as "The Crown Jewel of Iceland".  More icebergs can then be found at the nearby sandy shoreline, Diamond Beach. The interplay of light, the dark sands, glistening ice, and reflections make this an excellent opportunity for stunning winter photography.  Already a photographer‘s dream, the scene may also include a brilliant display of Northern Lights, should conditions be favourable.  The glistening ambience of Jökulsárlón has inspired filmmakers as well as photographers, as evidenced by the James Bond films "Live and Let Die" and "A View to a Kill". Fans of HBO's fantasy series "Game of Thrones" will also note that many winter scenes from the first series were shot in the Vatnajökull area. The glacier lagoon, Fjallsárlón, in southeast Iceland may be less known than the famous Jökulsárlón—which lies to its east—but is no less a stunning site. It stems from a glacier outlet of Vatnajökull called Fjallsjökull and is again riddled with floating icebergs which have broken from the glacier.  The majestic glacier volcano Öræfajökull also towers over the scene and is home to Iceland's highest peak, Hvannadalshnúkur. This is truly stunning scenery, the glistening ice and snow of the water, its beauty and serenity making for an extraordinary experience and offering chances of great pictures.  Being less visited than Jökulsárlón, it offers additional solitude, where you can stand in awe against the breathtaking nature. When your time at these glacier lagoons is over, you will begin the return journey back to Iceland's capital, proud of the incredible pictures you've captured over the last two days.
Read more

After you signup, we’ll send you a recommended camera gear and packing list. Please pay special attention to things that we say are absolutely required.

Please note we don’t provide extra passengers to fill up the 4 passenger quote, the tour is private to your group. If more than 4 passengers, contact us for a quote. If this tour appears as fully booked, don't hesitate to contact us as additional tours can be arranged on your selected date.