How to Take Great Photos in Bad Weather

Bad weather can be annoying, especially when you go on a photography trip in Iceland. You spend a lot of time and money to get to your location only to find that it’s overcast and rainy most of the time.

In Iceland, the weather varies a lot. It can be very stormy at one part of the day and clear sky with sun the next. That’s why Iceland is so great for photography: the weather conditions can change just like that. It does happen that some days can be completely grey and it can demotivate you to take photos... but the fact is: I sometimes love ‘bad’ weather! With bad weather, I mean overcast skies, foggy or a light drizzle. Of course it can also happen that we get 150 km/h winds with strong rain; that’s a completely different story! But as long as it doesn’t rain, we’re going out to shoot!

When we’re on a tour in Iceland, I can sometimes feel the mood of the people when it’s one of those grey days. But as guides, we always find a location that is nice to photograph in this kind of weather. And sometimes the weather even complements the scene. It will give you photos with an atmosphere. I personally prefer weather like this over clear skies with sun and very harsh light. The ‘grey’ days give a very soft light in which some scenes and landscapes look absolutely beautiful. And dramatic weather is simply amazing and fitting for Iceland (and a lot of other country’s) atmosphere. So don’t worry: there is always something to photograph!

Examples and Inspiration for Shooting in Bad Weather 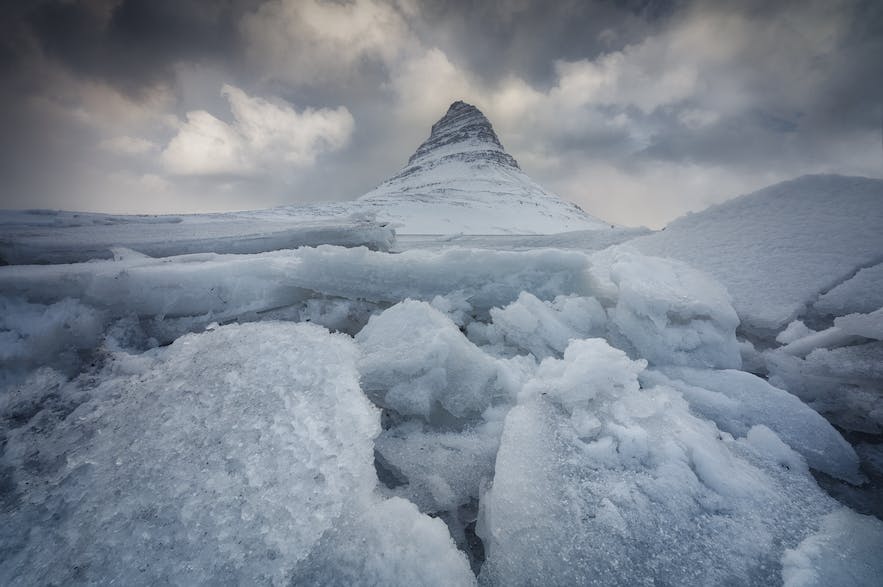 Moody days can give you a very flat colour palette with low contrast. It gives a very relaxing yet a bit dramatic feel to the image. You don’t always need strong colours for a pleasing image. In this example I’ve used the ice around Kirkjufell to complement the sky. 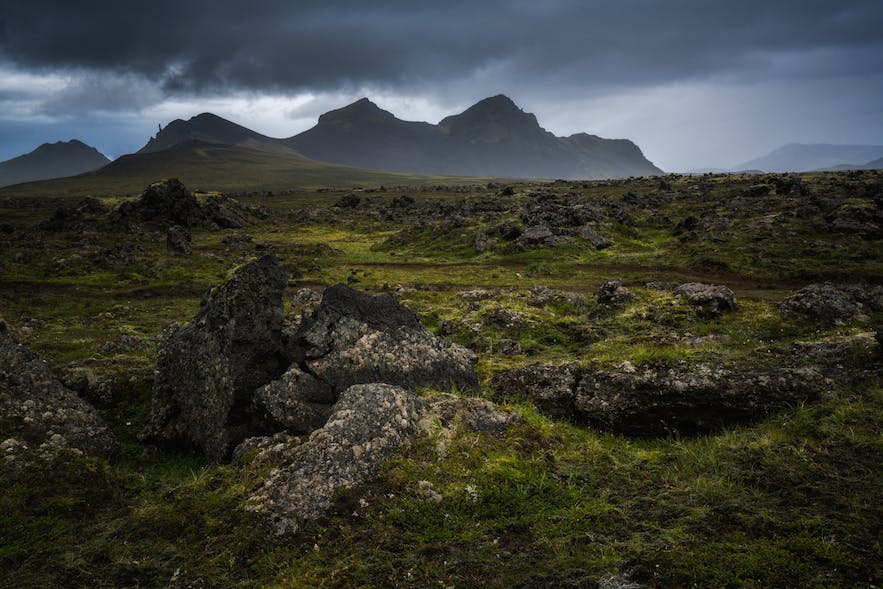 A lava field in the Icelandic Highlands. Photo by: 'Albert Dros'.

This shot is very simple. Taken from right next to the road that goes into the Icelandic highlands, it’s a simple composition but showing a great amount of drama because of the ruggedness of the landscapes in combination with the dark sky and dark light. It gives you ‘Lord of the Rings’ feeling. This is simply because of the ‘bad’ weather. If it would be blue sky here, the shot would not look dramatic and interesting at all. 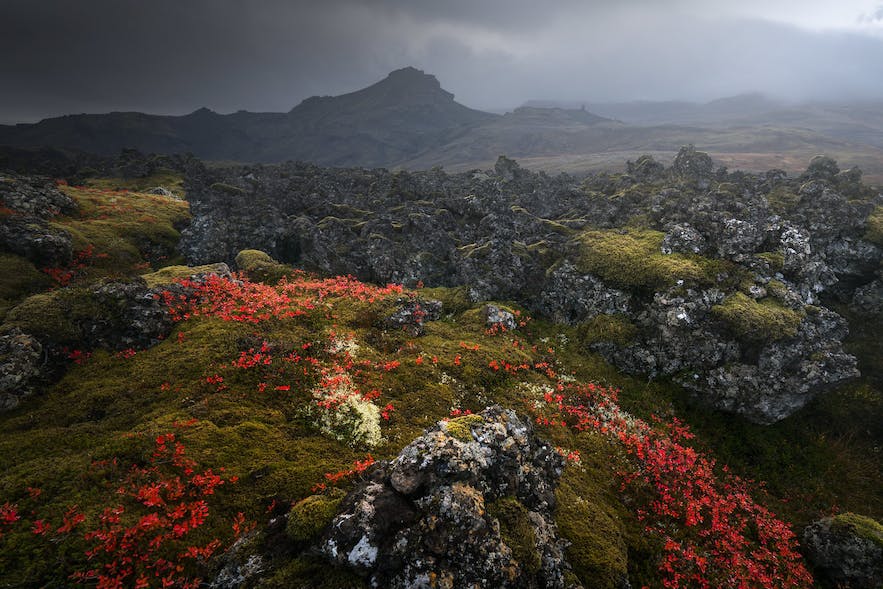 Berserkjahraun is a colourful lava field in autumn. Photo by: 'Albert Dros'.

During this photo at the Berserkjahraun lava field, the weather was rainy, low visibility and a lot of fog. I remember some people stayed in the bus when we stopped here. They had no motivation to go out and shoot. I went out, excited because in my head I knew I could make interesting shots with this atmosphere. I grabbed my camera, went out and did a couple of test shots. I went back into the bus, showed the shots to the people and everyone immediately went out and shoot.

With this kind of weather you sometimes have to change your mindset. This is easy for myself because I know what’s possible, but some people just need that little push. This can be an exciting guide or just a simple example showing what’s possible. And this is just that! With very gloomy weather the greens and other strong colours, like these little flowers really pop. You can really use it to your advantage against the dark rocks and atmosphere. Contrast makes a photo interesting, and this kind of weather in combination with bright objects works very well. This image was taken during an autumn photo tour in Iceland. In autumn you get beautiful red flowers in the lava fields. 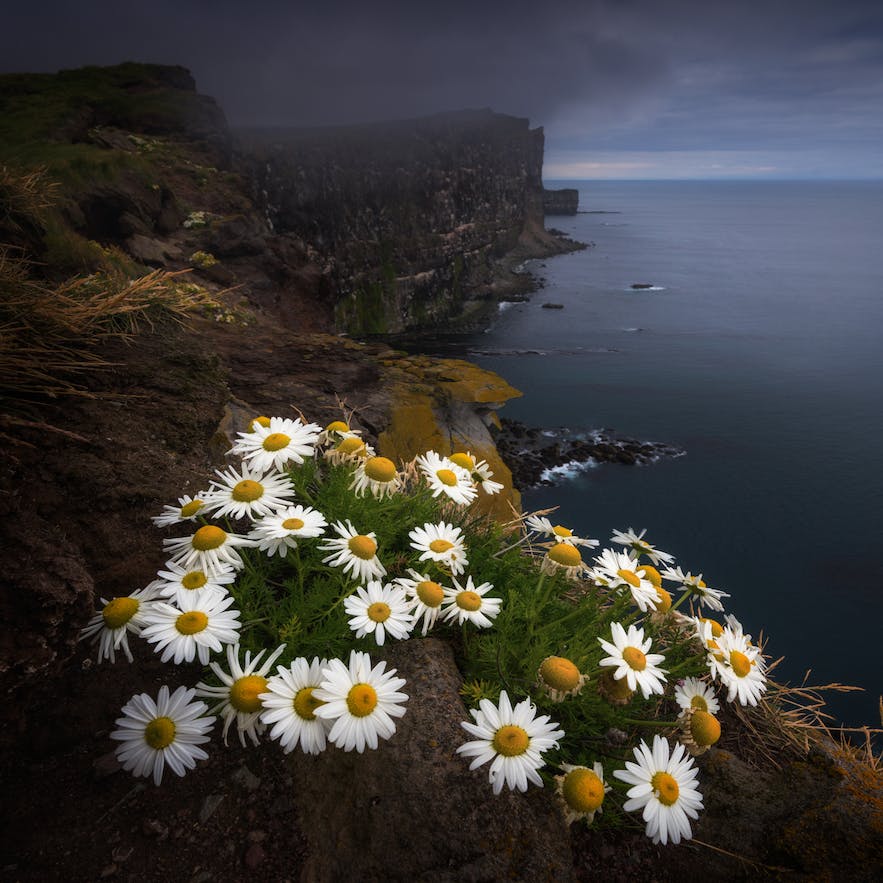 Summer is the time to photograph wildflowers in Iceland. Photo by: 'Albert Dros'.

This photo was taken on a summer photo workshop in Iceland and is another example of the contrast of very bright flowers against a very dark sky. 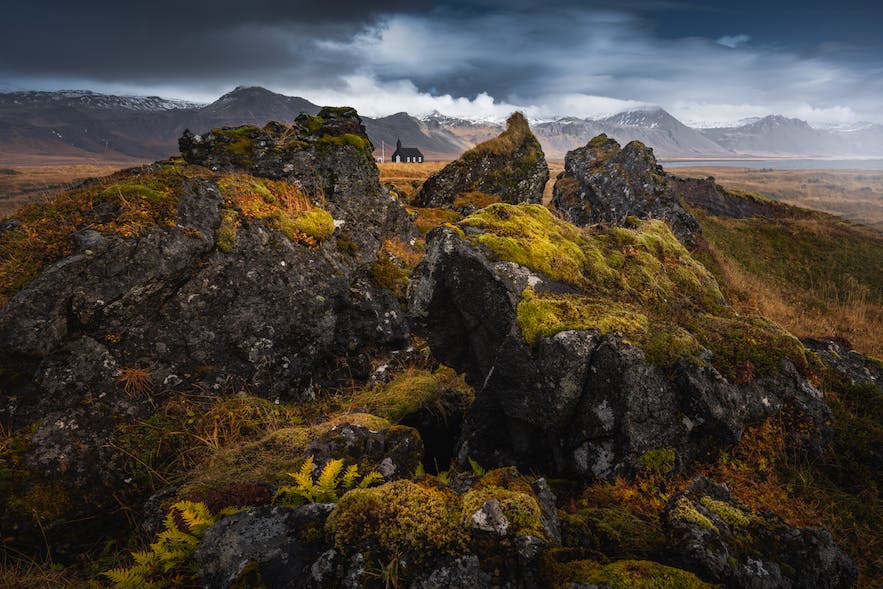 Within the lava field at the black church of Budir. Photo by: 'Albert Dros'.

A different composition from the famous black church of Búðir. It rained during this photo. The dark atmosphere really works well here with the greens and orange colours. This photo was taken during autumn. 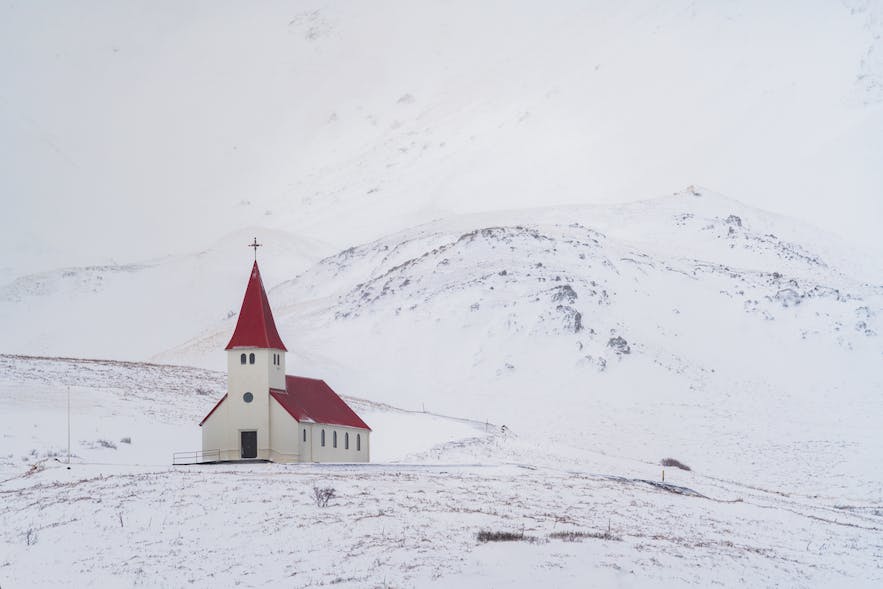 Famous church of Vik in a winter coat of snow. Photo by: 'Albert Dros'.

This simple shot was taken during a winter photo tour where it was very foggy in the morning. The reds of the little church in Vík worked perfectly to pop out of the monotone scene. 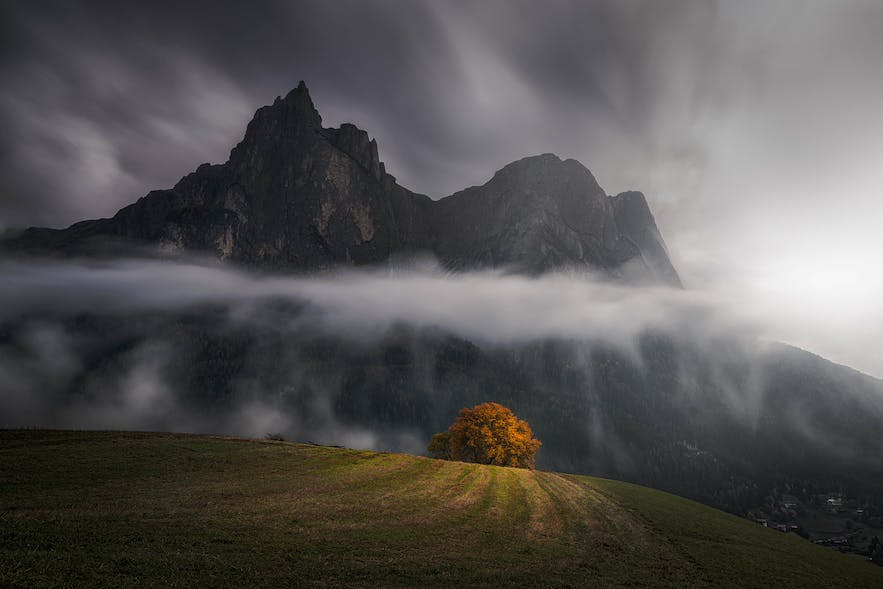 Clouds swirling around a mountain in the Dolomites. Photo by: 'Albert Dros'.

When you see clouds swirling around a mountain, try long exposures. It can have an amazing effect. This exposure was about 4 minutes and it almost looks like it’s raining. Clouds kept going up creating this effect.

Aerial Photography on a Cloudy Day 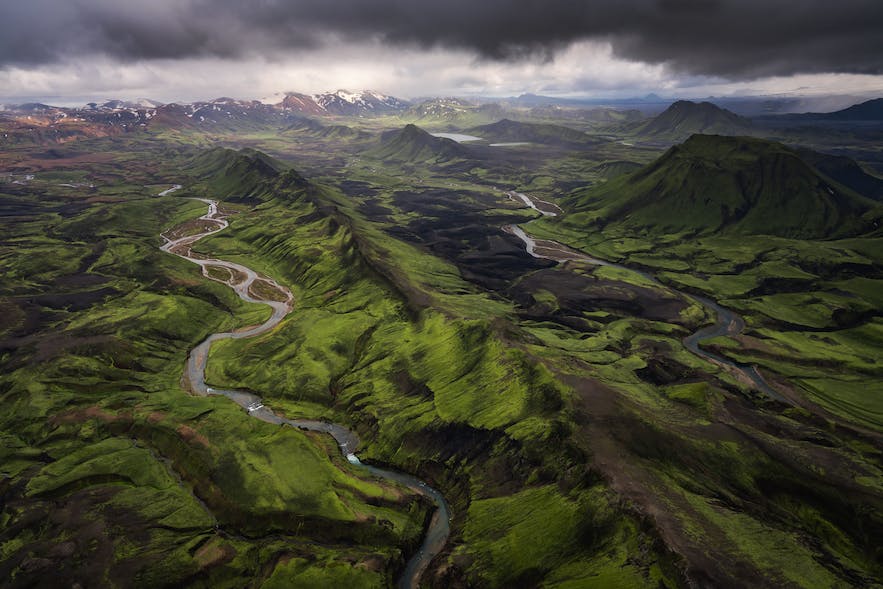 Flying over the Icelandic Highlands. Photo by: 'Albert Dros'.

Another dramatic shot of the Icelandic highlands. Did you know drones are allowed there as long as you follow the rules? Iceland from the sky looks amazing and dark clouds really complement the scene. 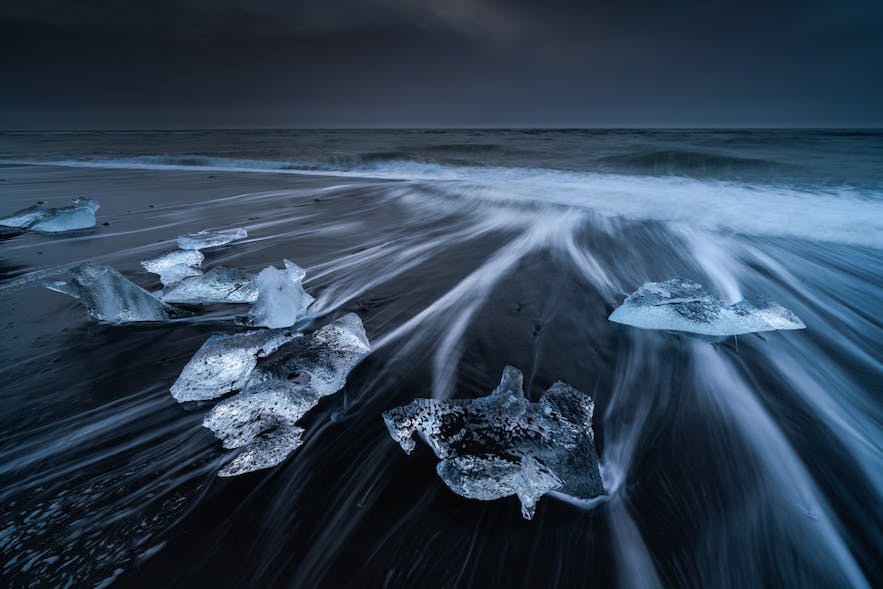 Shooting at the Diamond Ice Beach is fun with boring skies. Photo by: 'Albert Dros'.

Diamond beach is a location that we always visit multiple times during our tours. It is amazing to photograph in basically ANY kind of weather. And actually, I love to photograph it with completely ‘boring’ skies. Because the monotone vibe works really well here. The ice crystal clear ice really pops against a dark sky. Because a dark sky makes the black sand pitch black against the ice. It’s another example of when a lot of people during a tour get demotivated to shoot. But when I show them these kinds of images, they’re happy to go out! 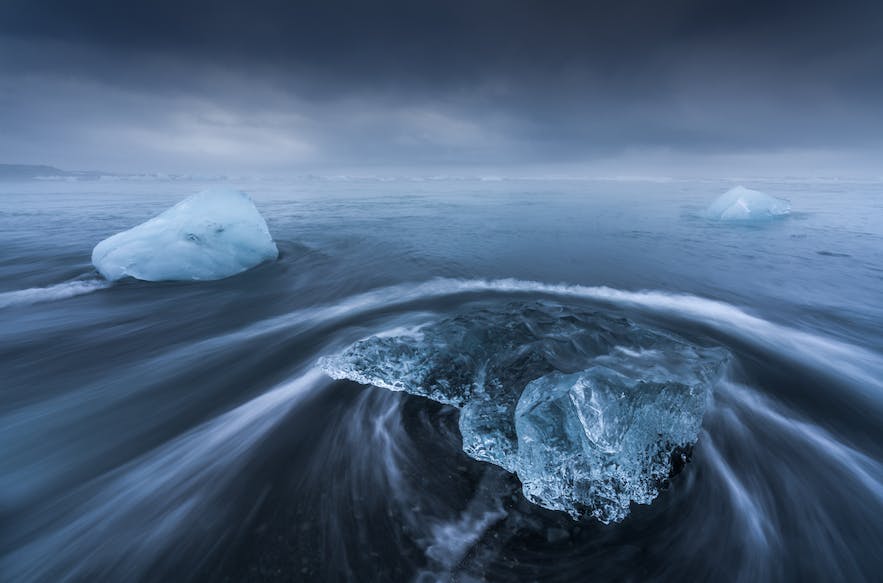 A gloomy morning at the Diamond beach in Iceland. Photo by: 'Albert Dros'.

Another example of a very gloomy morning on the Diamond beach with a light drizzle. And there were actually almost no waves. This doesn’t happen a lot and it really gave a magical atmosphere. It proves again that photographing the ice beach is magical with every kind of weather.

Photography on a Windy Day in Iceland 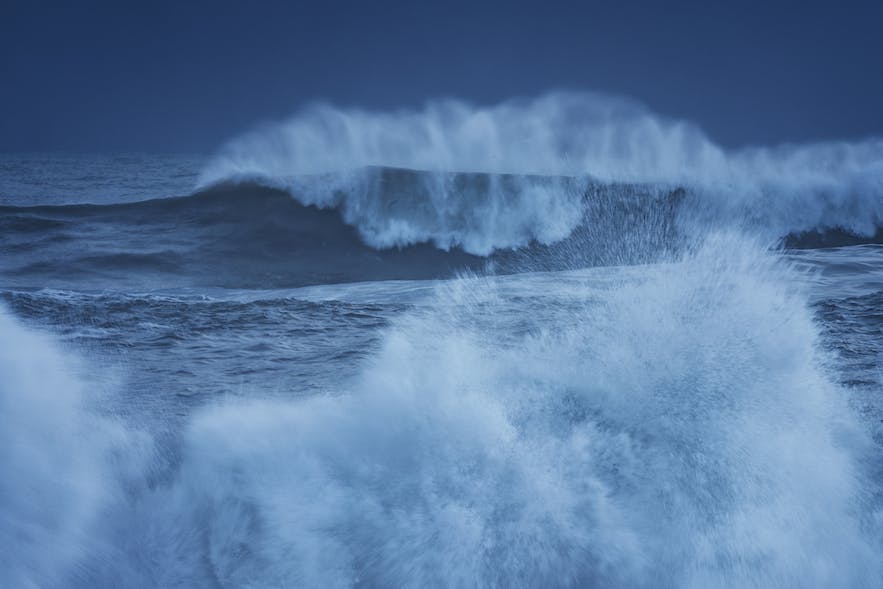 Iceland can also get very windy. Windy and grey sky is perfect for photographing drama in the waves. As we are always close to the coastline, we can always find a good spot to photograph waves. Showing the drama in the water is always great in a picture. By using semi fast shutter speeds of around 1/25 of a second, we can capture the drama and still get a painty look in the image. Sometimes just shooting close ups of the nice can already be great fun. 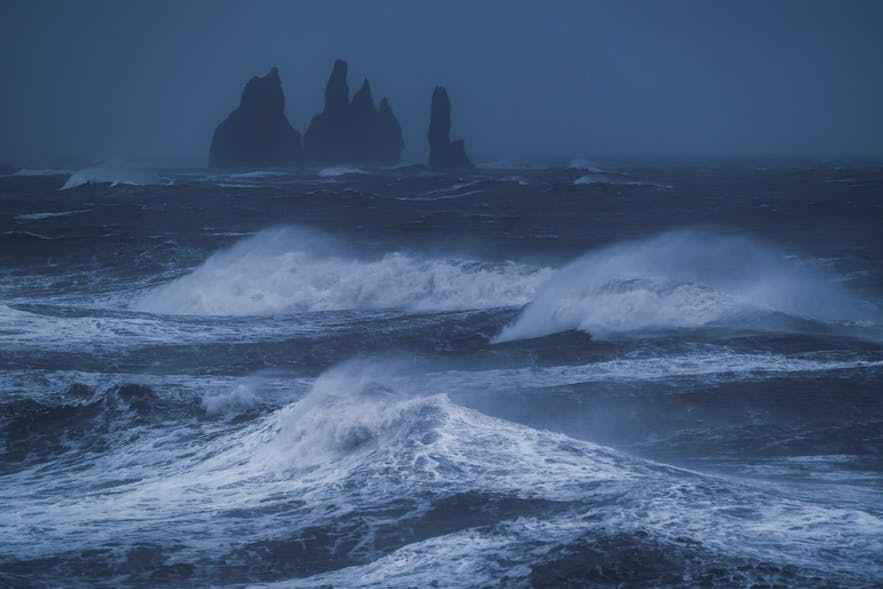 This was shot during a completely overcast afternoon with high winds near Vík. But the waves were great! We always encourage our students to go out and shoot these scenes. By showing them our own wave photos in the bus we show them what’s possible during this kind of weather.

Get Outside to Shoot

When I did my first tour with Iceland Photo Tours, I was co-guiding with Edwin Martinez (an amazing guide and good friend). He told the group a funny story that some people wanted to stay in the bus at this location because of the bad weather. Edwin forced them to go out and shoot, and everyone got some great shots of high waves with the sea stacks. One of them, who didn’t want to go out of the bus at first, later submitted one of those shots to a photo contest and won. You just have to be motivated to go out and shoot, and the good shots will come to you! 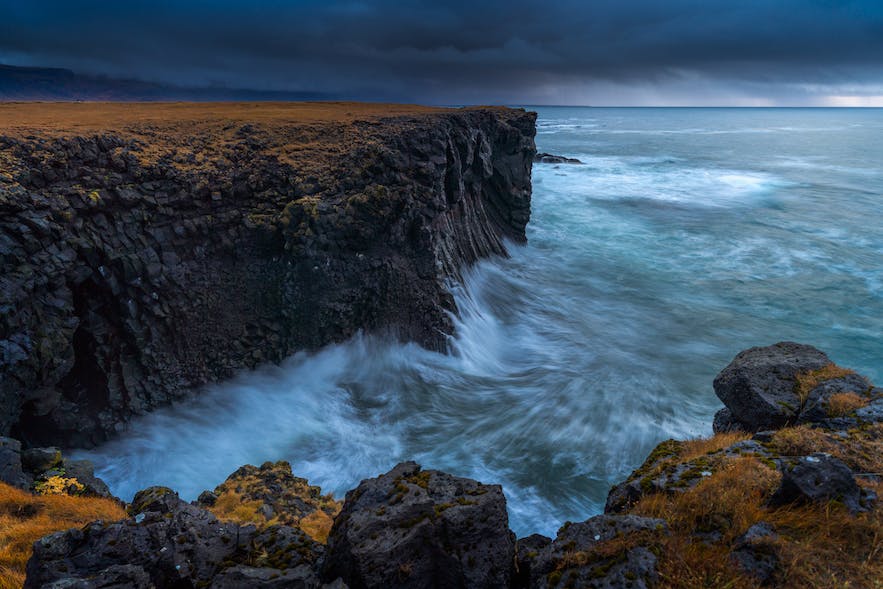 Drama at the cliffs of Arnarstapi. Photo by: 'Albert Dros'.

Another good example of showing drama. High waves rushing up to the basalt rocks in the Snæfellsnes Peninsula. It was rainy with dark clouds in the background. A perfect opportunity to shoot some seascapes. A tip when shooting these: Try semi long exposures of around 0.5 seconds. If you freeze the entire sea here with 30 seconds, all drama gets lost. 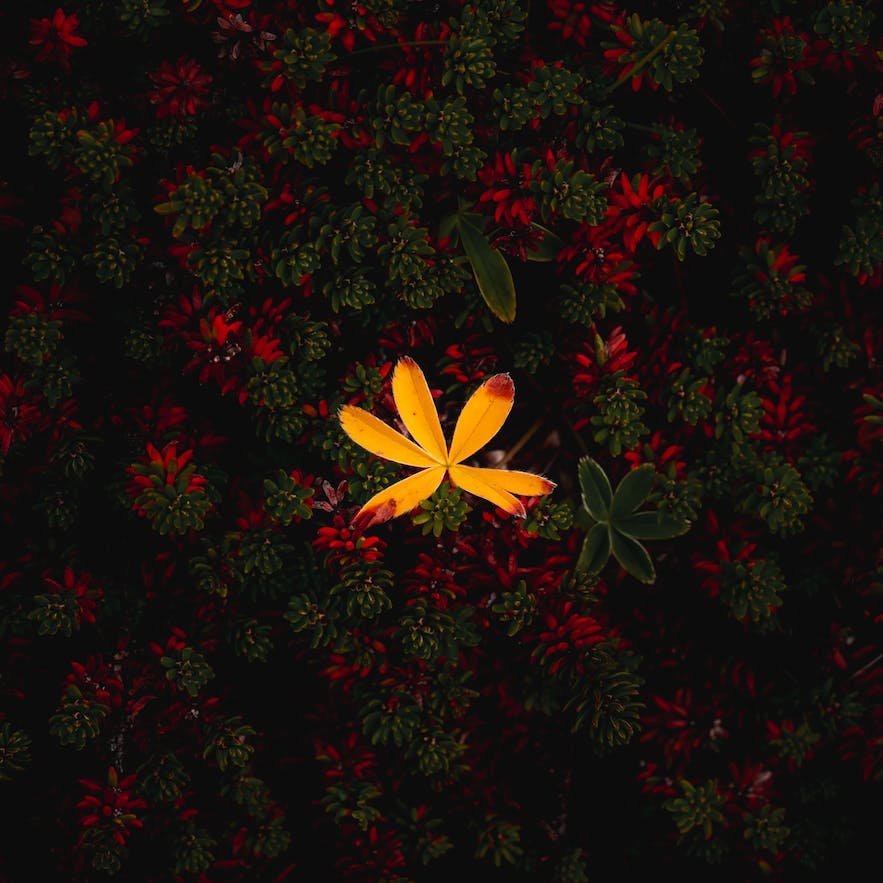 Find details to shoot with macro. Photo by: 'Albert Dros'.

Last but not least: macro! You can always shoot the little flora and fauna in Iceland. I love it especially during autumn tours when you can find all these little coloured flowers here. I can really spend hours finding these and making interesting compositions. This works with any kind of weather as well! Actually, ‘boring’ weather is the best for this because you get this beautiful soft light.

I hope this article inspired you go go out and photograph in ‘bad’ weather because you can get so many beautiful shots just because of this. Don’t worry when you get grey skies or strong winds during one of our tours. We will make sure you will always get some EPIC (you will hear me say this word a lot during tours) shots!

See you soon in Iceland, or in any other place of the world!

About the author:  Albert Dros is a landscape photographer based in the Netherlands. You can find more of his work on his website or by following him on Facebook and Instagram.

Test your photography skills in the spectacular landscapes of Iceland. Join one of our autumn photography tours!