Join this amazing 11-day photography tour and discover the brilliant colours and sights of Iceland in autumn with your camera. This is the perfect option for anyone keen to explore the otherworldly landscapes of Iceland while sharpening their photography skills.

Autumn is the perfect time to explore Iceland; it's a season that brings with it a series of changing forms, lights and colours, in the last hurrah before the coming winter. It’s true that by this time of year the days are growing fairly short, but it’s also around October that the wondrous Northern Lights return to the skies.

This tour will focus primarily on capturing some of Iceland’s finest sights when the conditions are at their best during the golden light of the sunset and sunrise. Of course, we will spend plenty of time hunting the Aurora Borealis as well.

Joining this group of photography enthusiasts will be two world-leading award-winning photography instructors, who know all of the locations in detail and have mastered the ins and outs of making the most of Iceland's beautiful landscapes. This workshop is well-suited to amateur photographers as well as the more experienced looking to hone their craft.

In terms of locations, the group will focus on the rugged sights of the Snæfellsnes Peninsula in West Iceland, the popular Golden Circle near the capital, and the breathtaking wonders of Iceland’s South Coast.

Expect to see one of Europe’s most imposing glaciers, photogenic ice and rock formations, dynamic coastlines, volcanic black sand beaches, thunderous waterfalls, and much more besides.

Embrace the rugged beauty of Iceland and take some amazing pictures to last a lifetime on this photography tour. Check availability by choosing a date.

Professional photo guide
Transportation in a comfortable vehicle
Accommodation in hotels and guesthouses. Rooms with private bathrooms.
All breakfasts; Group dinner on day 1 and day 10. 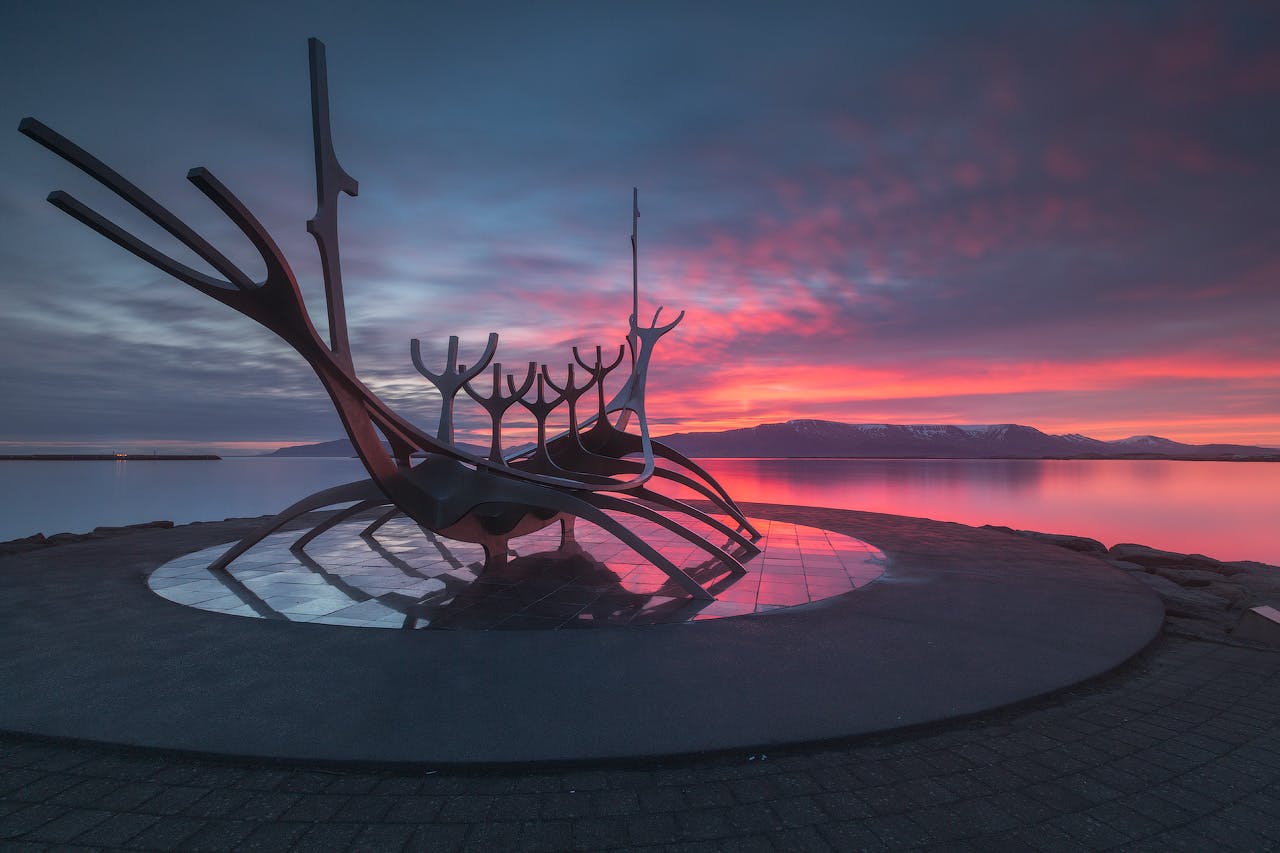 On day one you will land at Keflavík international airport, before making your way to your hotel in central Reykjavík. You'll meet your group and guides in the evening in the lobby of your hotel, and head out for dinner as a group.

It’s an excellent opportunity to get to know each other, and your guides will take some time to discuss the itinerary and adventure to come. Your accommodation for the evening will be in Reykjavík. 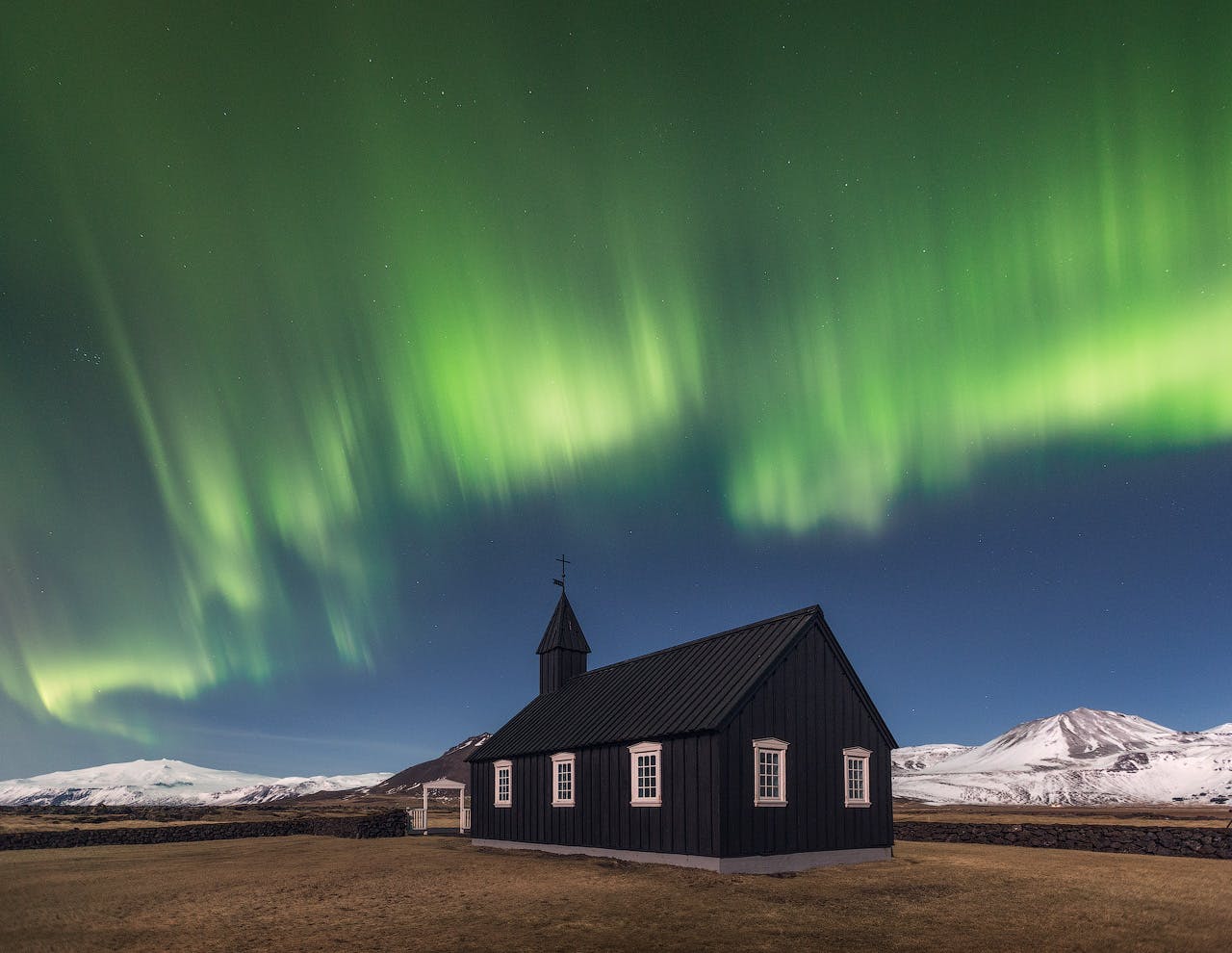 On the morning of the second day, you will be picked up from your hotel bright and early. To begin with, the group will head north to the Snæfellsnes Peninsula in the West of Iceland.

On the southern part of Snæfellsnes, you will photograph the rugged wilderness of the coastline, where jagged cliffs and unusual rock formations act as spectacular foregrounds for potential shots of the northern lights.

Even if the Aurora Borealis doesn't grace the night sky, the sights of Arnarstapi and the bewitching black church near Búðir will definitely be enough to keep you occupied.

Next, you will explore the peninsula a little more with a trip to the rocks of Lóndrangar, a collection of volcanic basalt rising dramatically from the ocean. After just a day here, you’ll begin to understand why Snæfellsnes is often described as “Iceland in miniature” as there are so many incredible natural spectacles to be found, and there are endless opportunities for patient photographers.

You will spend the evening in accommodation in Snæfellsnes. 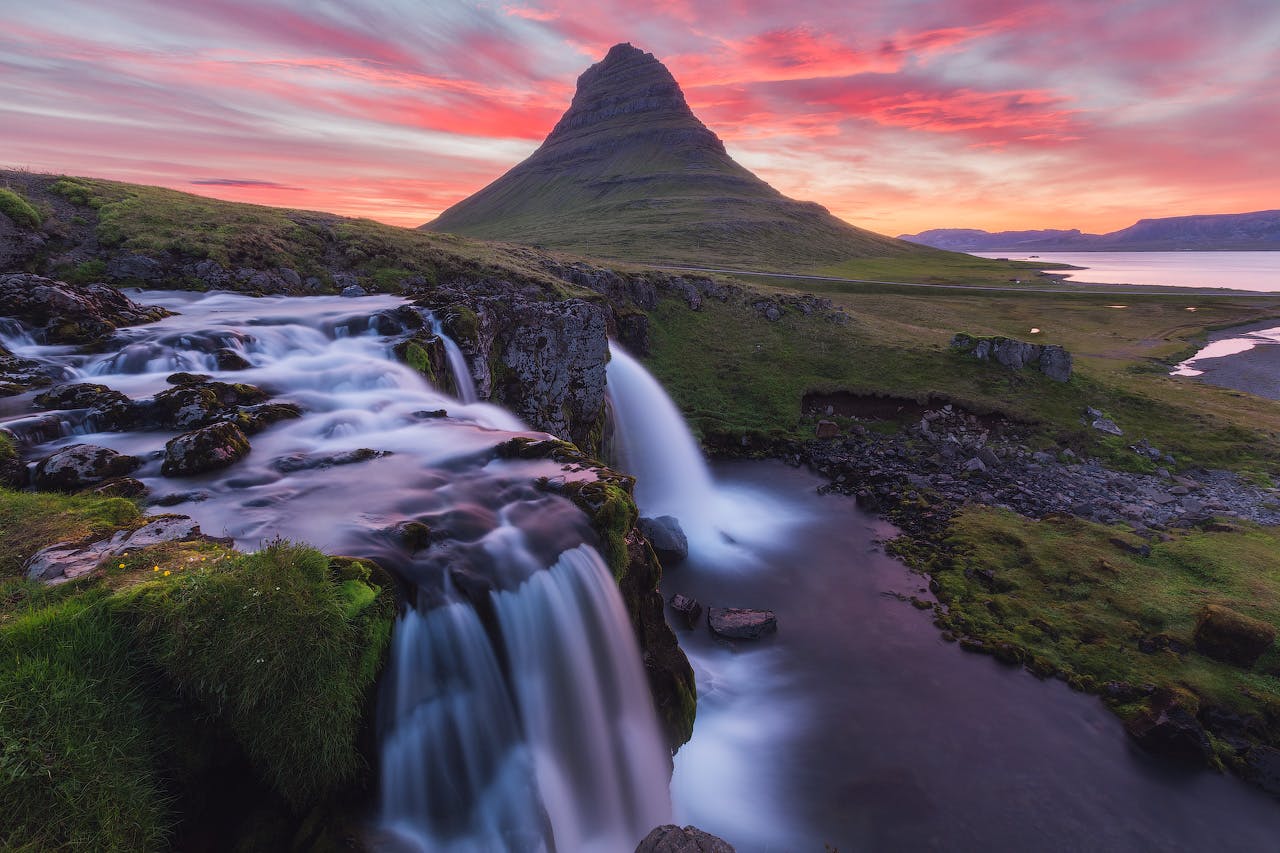 On day three, your adventures on the peninsula of Snæfellsnes continue. The aim will be to cover the sights and locations that you didn’t manage to see the day before, skirting along the quaint coastal villages and taking in the mighty Snæfellsjökull glacier.

As you head to the northern end of the peninsula, one of the highlights of the entire trip will come into view. With its almost-perfect cone shape, the mountain of Kirkjufell is a fairytale sight in a fairytale location.

You will have the chance to shoot it with the charming Kirkjufellsfoss Waterfall in the foreground, and Grundarfjörður Bay right behind. If you're lucky enough that your visit coincides with the Northern Lights, the whole group will get shots that will last a lifetime.

Your accommodation will once again be on the Snæfellsnes peninsula. 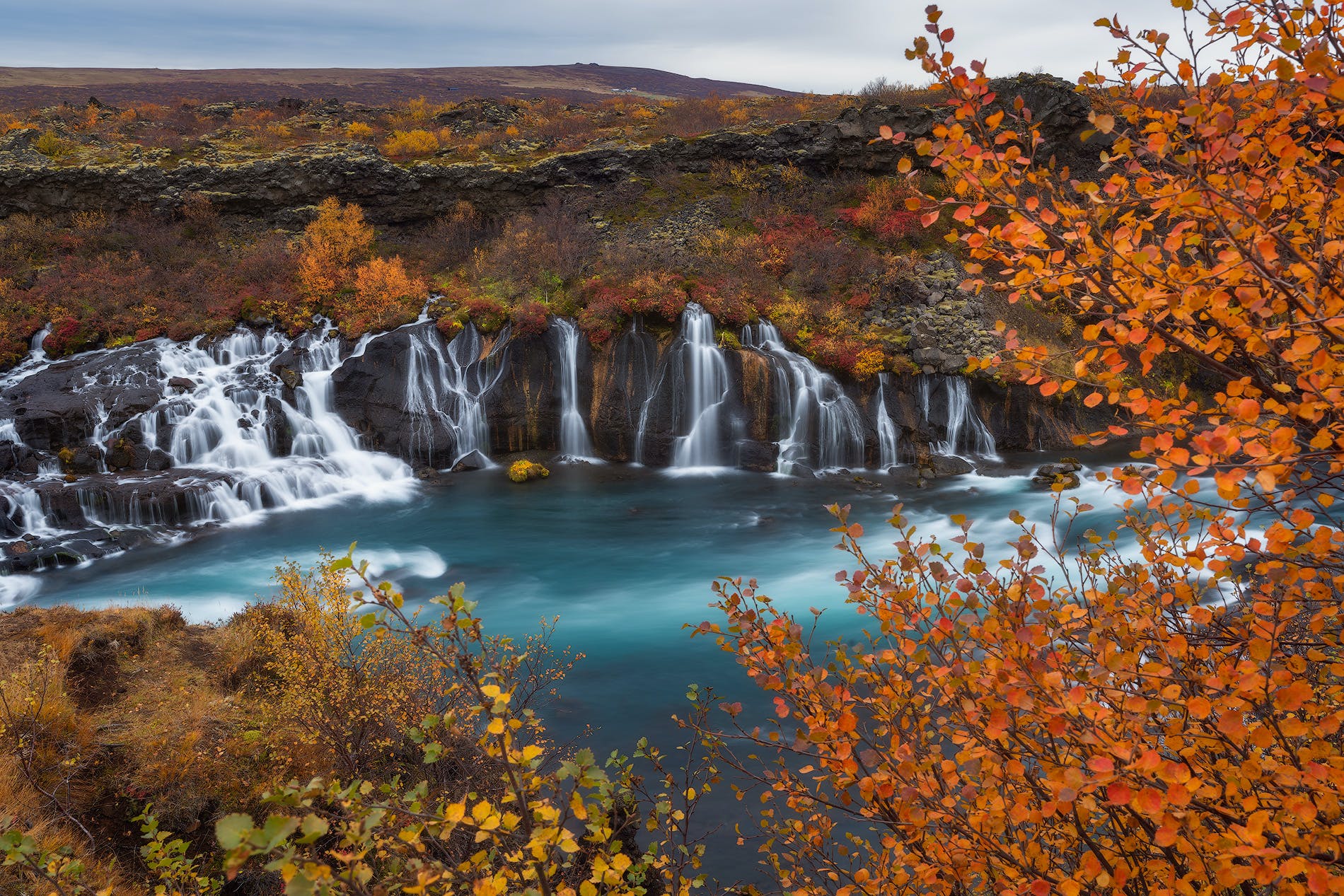 On day four, you will head back inland toward Iceland’s famous Golden Circle. First up will be a stop at the blue waterfall of Hraunfossar. It’s not so much a single waterfall as a series of cascading falls, which during the autumn months are surrounded by the many shades and tones of the season.

Only a stone's throw away is another impressive waterfall, Barnafoss. This violent churning waterfall stands in stark contrast to its tranquil neighbour and both make excellent photo subjects.

Next, you will explore the Golden Circle. Oddly for a circle, it has three points. The first is Þingvellir National Park, an area of incredible historical and geographical significance. The park marks the spot where the original Icelandic parliament was founded, and its giant fissures signal the meeting point of two continental plates.

You will then be driven up to the mighty Gullfoss, a spectacular waterfall that offers plenty of vantage points, a picturesque setting and fine mist for spectacular photography.

The final point of the Golden Circle is the Geysir geothermal area. Here there are once-in-a-lifetime opportunities for photographers patient enough to capture Strokkur, which shoots steam high into the air every ten minutes or so.

Your accommodation for the evening will be close to Geysir. 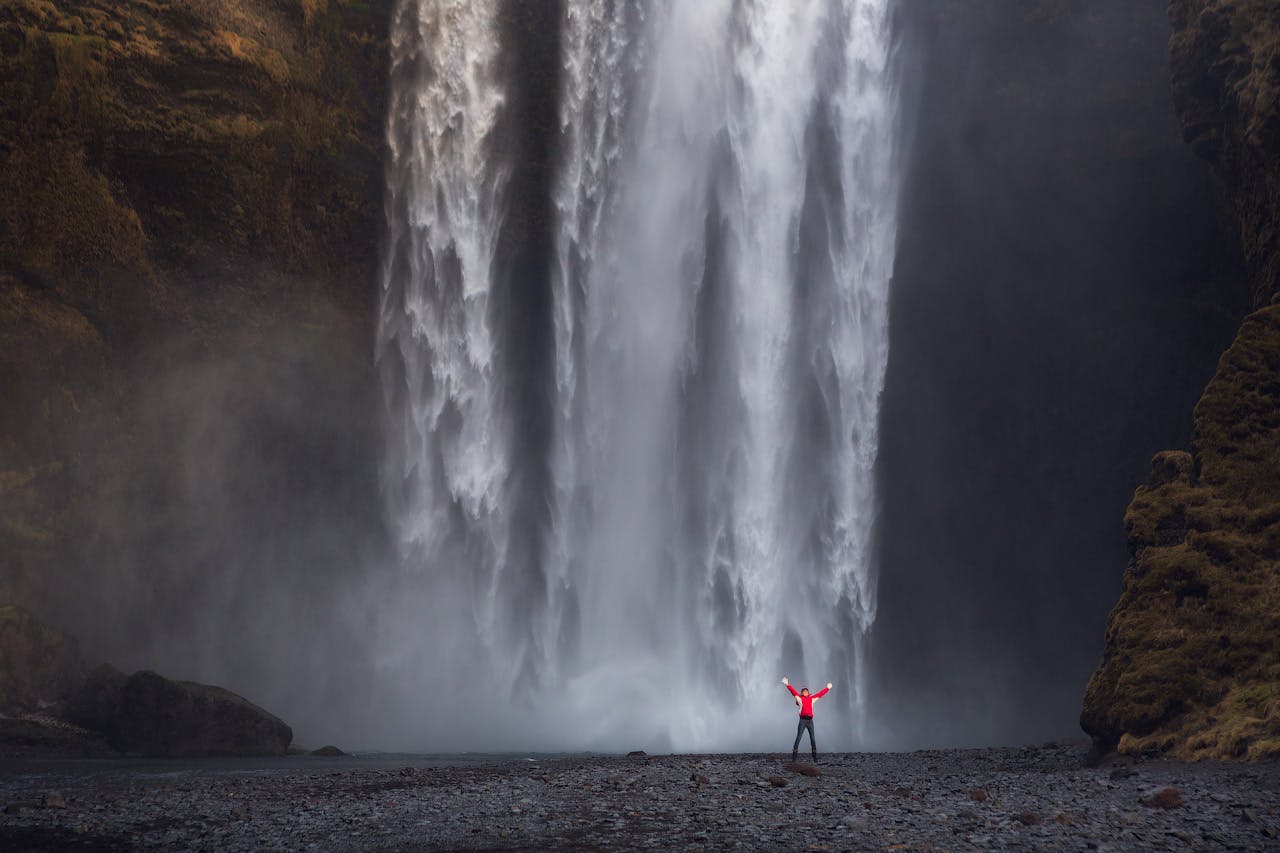 Day five marks a change of direction for the group, as you head south toward some of Iceland’s most impressive, natural scenes. The scenic South Coast is home to dramatic black sand beaches, amazing rock formations and a number of mighty waterfalls.

You will photograph the stunning Seljalandsfoss waterfall, which has an opening behind the water to allow for some extraordinary shots from the stony recess at its back. Another waterfall, Skógafoss, is nearby too.

The group will also explore some of Iceland’s finest coastline, taking in the Reynisdrangar sea stacks, the magnificent views from the stone walkway of Dyrholaey, and the breathtaking stretches of black sand beach as the group heads towards Vik and accommodation for the evening. 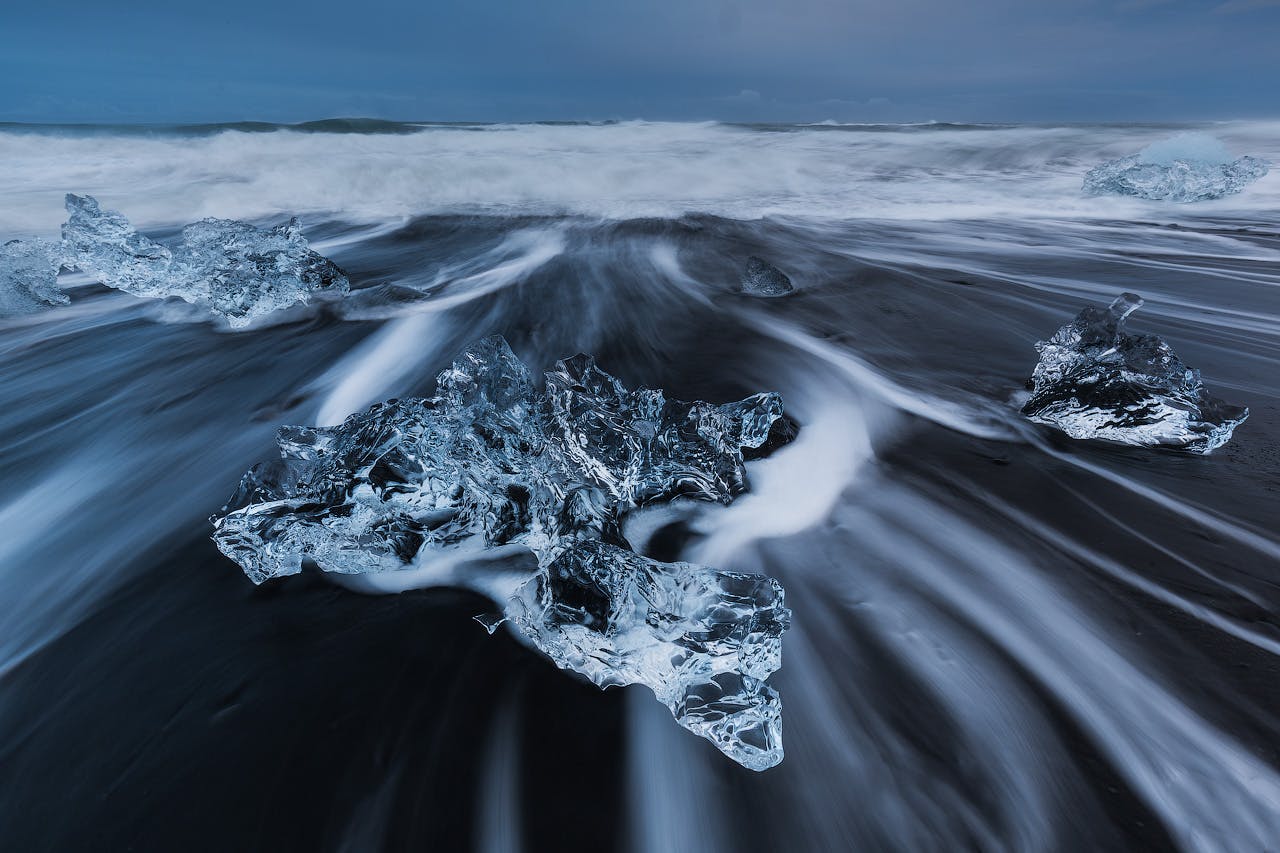 When many people think if Iceland, they probably picture scenes that can be found within the Vatnajökull National Park: Fire and Ice. That’s where you will head on day six. The group will spend three days in the area, which gives you a good idea of just how many sights and scenes there are to capture and enjoy.

Vatnajökull National Park is most famous for its combination of volcanoes, glaciers and icy lagoons. Vatnajökull is, in fact, Europe’s largest glacier, and Iceland’s highest summit, Hvannadalshnjúkur, can also be seen in the area. It’s a place of magnitude and pure natural theatre.

You will retire for the evening to accommodation close to the glacier lagoon. 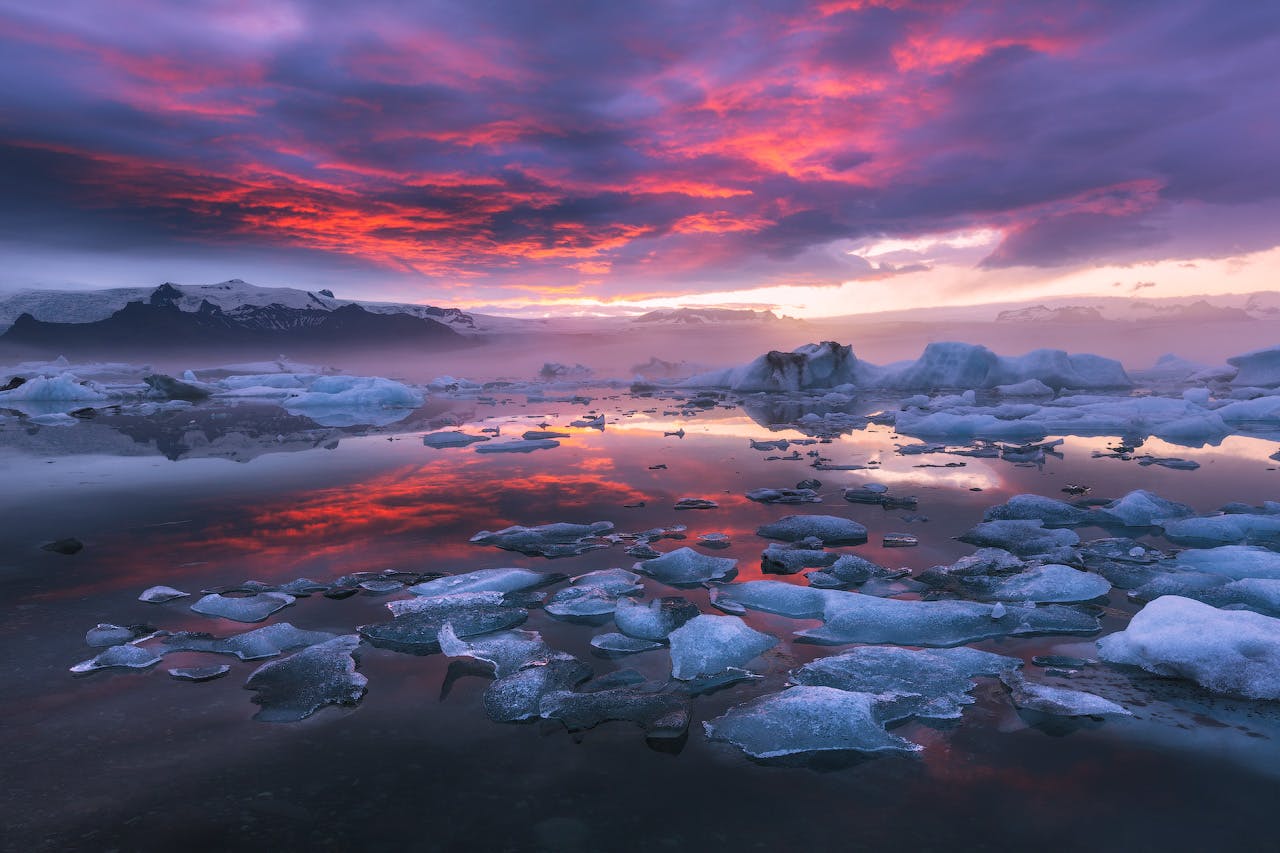 Picture the scene: Glistening, miniature ice sculptures wash up on a black sand beach as the sun begins to rise. By this time, you’re probably starting to understand why Vatnajökull National Park is a photographer’s dream; full to the brim with different lights and colours, contrasting textures and an array of natural wonders.

On day seven the group will concentrate on the Jökulsarlon Glacier Lagoon. There you will observe enormous icebergs break free from Europe’s largest ice cap and float silently out to sea on the lagoon.

You will visit the volcanic, black sand Diamond Beach and marvel at the crystal clear ice washed ashore, and hopefully, the elusive aurora borealis will come out at this stunning location.

Your accommodation for the evening will once again be close to the glacier lagoon. 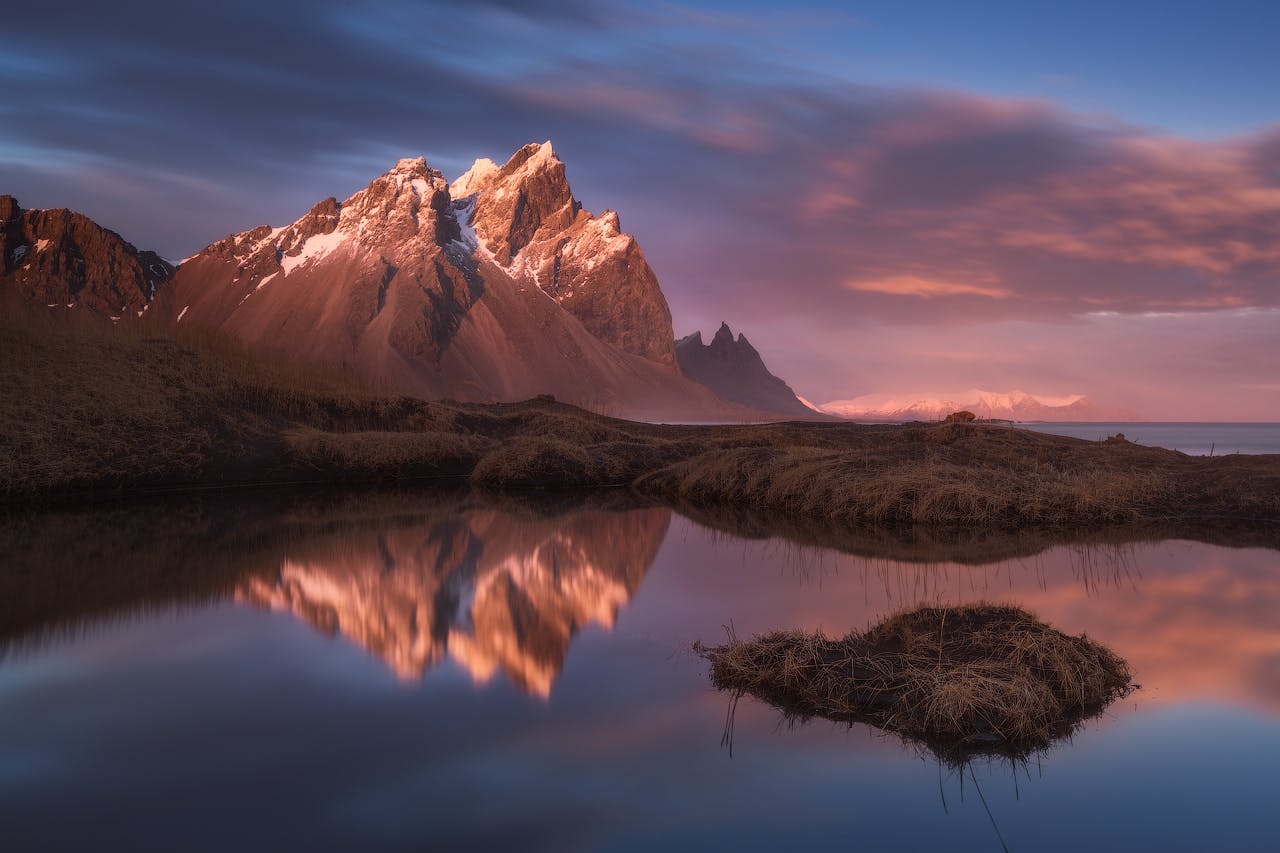 As you’ve probably guessed by now, there is so much to explore in the area that time will be largely spent moving from one incredible sight to another. The exact itinerary will be flexible, depending on the group’s preferences, the light and the weather conditions.

One thing’s for sure; few places in the world exhibit such a wide range of natural phenomena as Vatnajökull National Park, so you can be assured that your expert guides will be constantly on the hunt for the best possible photographic opportunities.

You will then travel further east to Stokksnes Beach, where we will capture the dramatic peaks of Mt. Vestrahorn alongside the crashing waves of the Atlantic Ocean. If the Northern Lights make an appearance, this could be the photo opportunity of a lifetime.

Once more, you will return to your accommodation close to Jökulsárlón glacier lagoon. 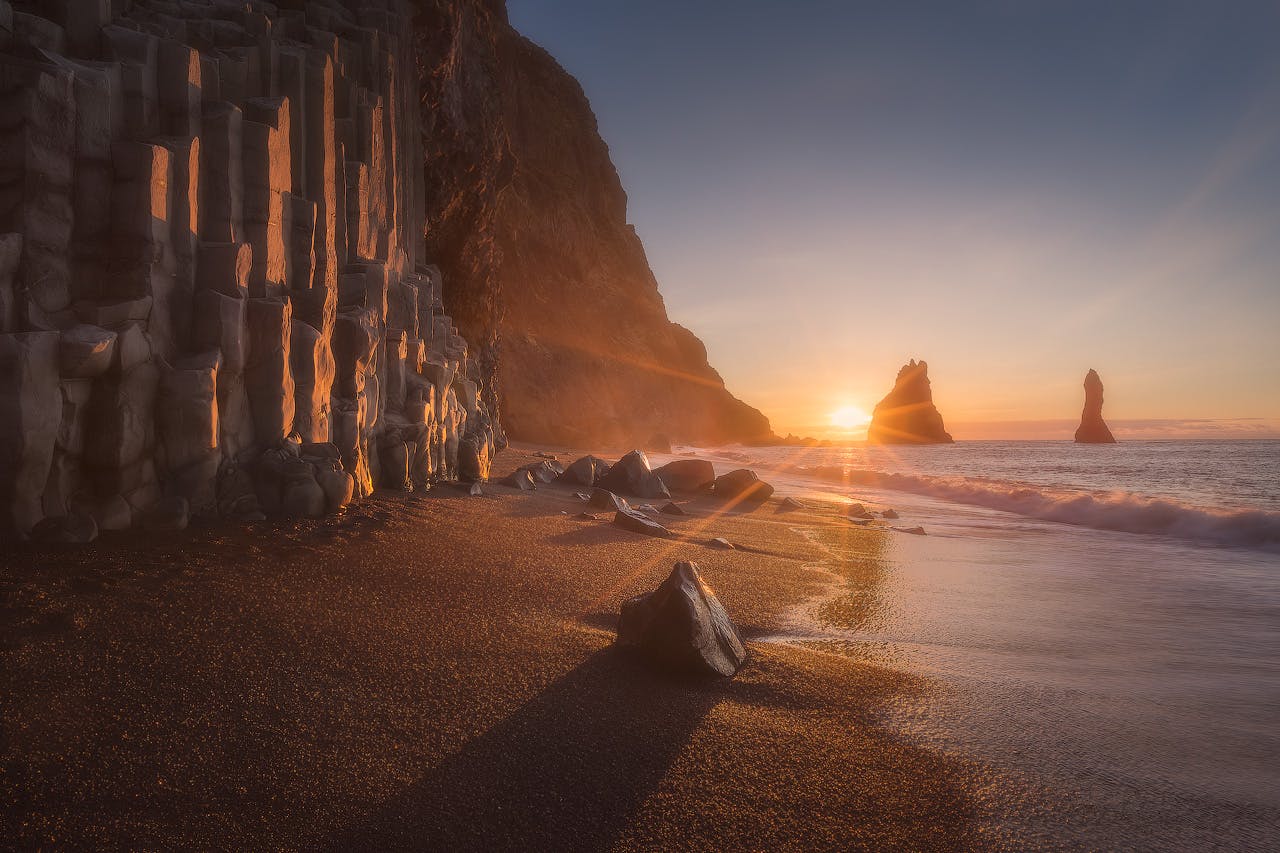 On day nine it's time to start heading back to drive in a westerly direction along the South Coast towards the town Vík. There are plenty of sights still to see along the shoreline, from mountain peaks, glacial outlets and mossy lava fields to wild Icelandic horses. Again, locations will be chosen accordingly, depending on conditions and timings and the preferences of the group.
Read more
Day 10 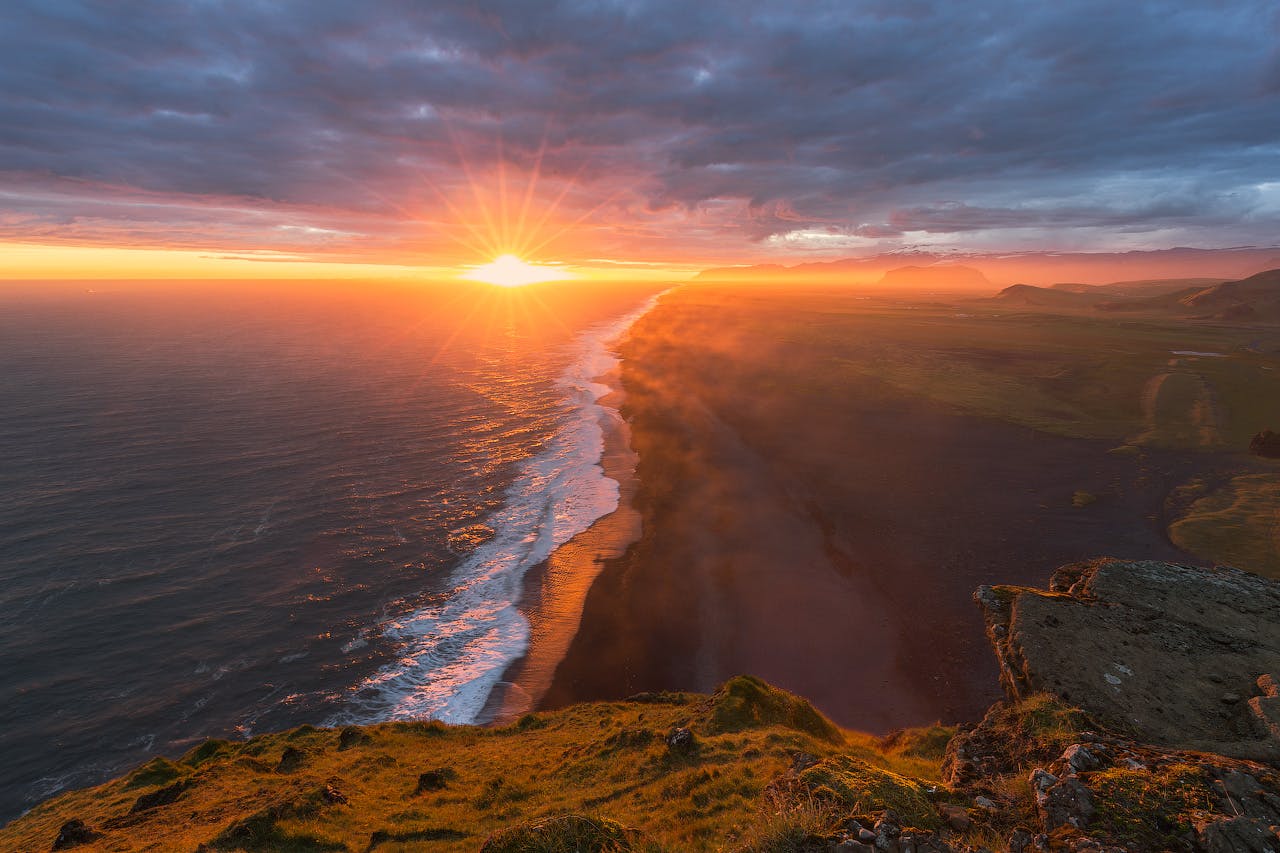 On the tenth day of this photography workshop, you will head back to Iceland’s capital, Reykjavík. There are plenty of sights on the way, and there will be one final chance to pick the brains of your expert guides as you capture the sunrise on Reynisfjara beach, with the Reynisdrangar sea stacks in the background.
Read more
Day 11 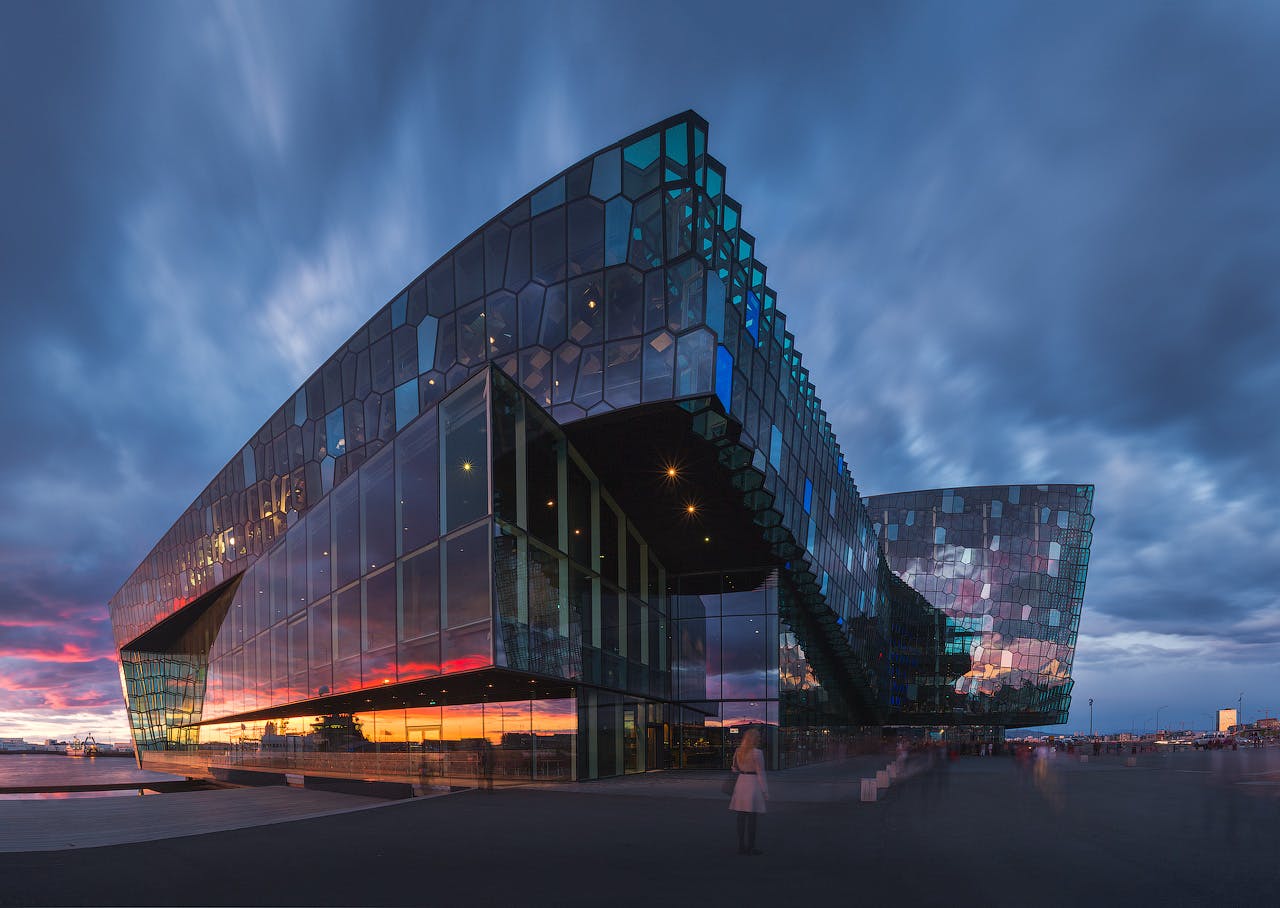 After a hearty breakfast at your hotel, you will head back to Keflavík International Airport, carrying with you many unforgettable memories and a bunch of fully loaded memory cards.
Read more

We highly recommend that you get a travel and medical insurance. Your own domestic medical insurance and private health scheme will not cover you whilst you are overseas. The tour is always dependent on weather, as the Icelandic weather can indeed be highly unpredictable. Likewise, visits to ice caves are dependent on favorable conditions, and indeed the ice caves themselves are not permanent. When it comes to the Northern Lights, while they are most likely to be seen between September and April, there is no guarantee that they will appear on a given day.