5 Reasons Why Iceland is the Best Destination For Aerial Photography

Iceland is popular because it’s a microcosm of nature at its finest; a wild, windy paradise of landscapes, waterfalls and all things spectacular. That explains why the Land of Fire and Ice has become a haven for photographers.

In recent years, photography of the aerial variety has taken off. But, for many obvious reasons, it’s not as simple to capture photos and videos from the air as it is at ground level.

Fortunately, Iceland is also an ideal place to take your drone and make the most of it. Here are a few factors that make Iceland a unique and rewarding aerial photography destination. 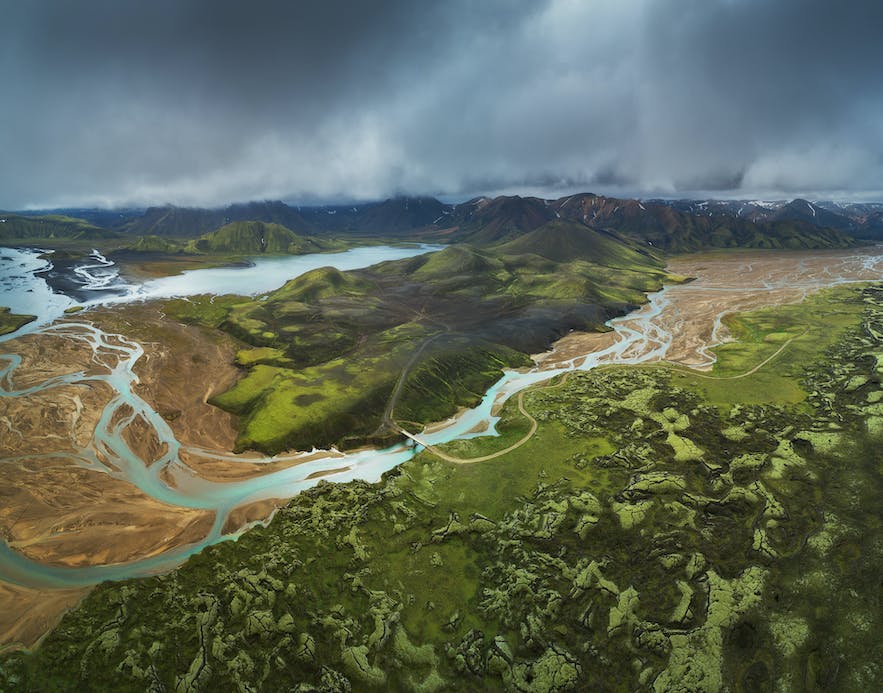 An Oasis from Above. Photo by: 'Iurie Belegurschi'.

Starting with the most obvious, Iceland has views to die for and remarkable scenery around every corner. There aren’t many places in the world that can offer this combination of variety and quality from a photographic perspective.

A drone is an expensive and fragile tool to take on a trip abroad, so you’ll want to choose a destination that makes the most of its capabilities and makes taking that risk worth it. Iceland and all of its views, colours and textures will offer you exactly that.

From vast waterfalls and mountains to placid glacier lagoons and volcanic deserts, Iceland has enough scenery to keep even the most determined drone pilot busy.

If you’re looking to create a highlight reel that showcases your ability, it helps to have a mixture of settings and angles. Iceland is one of those rare places where you can film for seven days straight and feel like you are on a different planet every shoot, not just in a different country.

So while it might be an obvious factor, it’s clear that Iceland’s breathtaking scenes – as well as their variety and the fact that they are absolutely everywhere – make this country ideal for aerial photography. 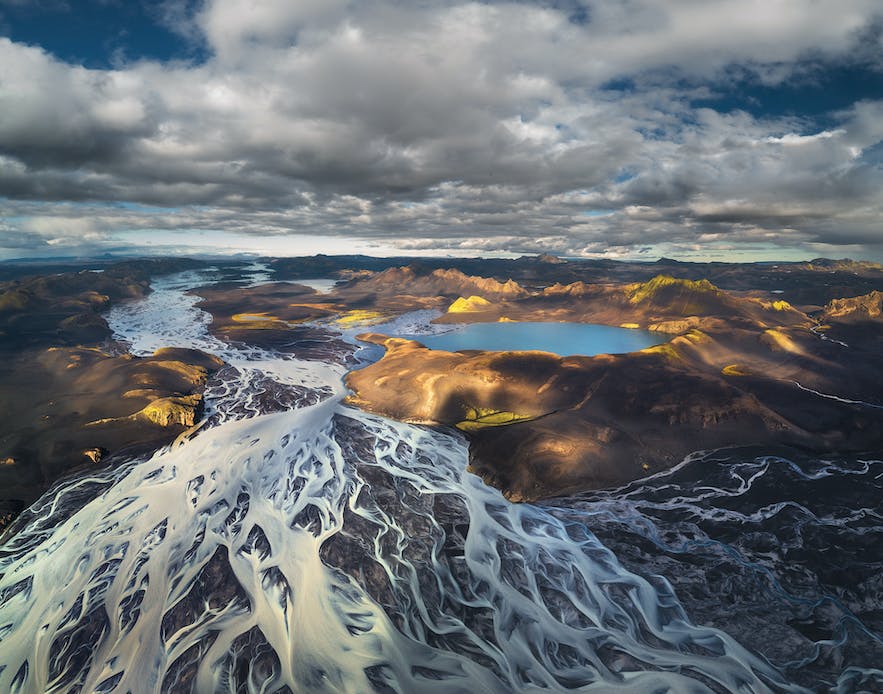 Just like above, one of Iceland’s most magical qualities occurs whether you’re shooting from the ground or the sky: the light.

Depending on the season, Iceland’s sights can be illuminated with bright sunshine, moody storm clouds or the otherworldly glow of the Northern Lights.

Again, it’s about variation. Some of the country’s scenes simply don’t suit blue skies, like the fierce Reynisfjara black sand beach Equally, capturing the contrast of a raging waterfall against the almost-eerie Aurora Borealis wouldn’t work so well with a cloudy sky.

Iceland’s light also has another peculiar benefit whatever the season. Because it sits so far up in the Northern Hemisphere, in the summer months, the light just doesn’t go away. It can linger in perpetual twilight to give you more than just one ‘Golden Hour’. The angle of the light is also different here – the sun can look much warmer than it feels!

Catching Iceland’s sights at sunrise and sunset could be some of your most rewarding experiences as an aerial photographer. So what are you waiting for? 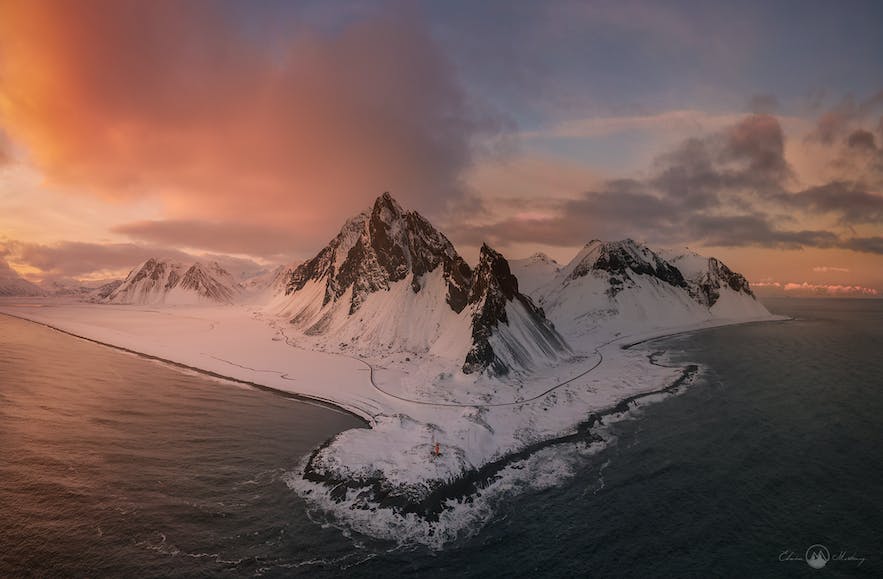 Vestrahorn in Winter from Above. Photo by: 'Edwin Martinez'.

Very few people are expert aerial photographers. As well as mastering all of the same camera settings like you have to with a DSLR, you’ve got to be smooth behind the controls and manipulate your drone to get the best shots possible. That isn’t easy.

Part of the reason that drones are banned from flying in Reykjavik is exactly that: when flown badly or irresponsibly, they can be dangerous to people and property. That’s why, aside from the capital, Iceland is one of the best possible places you could take your drone on holiday.

For starters, there’s barely anything to crash into once you get out of the capital. The vast majority of Iceland is empty and uninhabited – an endless wilderness where you’re more likely to see puffins than people.

This means that there are plenty of big open spaces for you to practice and perfect your flying skills. And don’t forget: when it comes down to it, all of that time behind the controls will pay off as you capture Iceland’s magical scenery with cinematic ease.

One thing to bear in mind: just because there aren’t people around, it doesn't necessarily mean you should be flying. The Iceland Transport Authority has regulations on where and when you can fly, and many of the country’s popular sights and national parks have been designated as no fly zones. Check before you fly and apply for waivers where possible.

All in all though, Iceland offers an ideal environment for amateur and professional aerial photographers. Wide open spaces are always forgiving for new pilots, leaving you to take in the sights without worrying too much about crashing your drone.

Having said that, just because there are wide open spaces, it doesn’t mean that flying in Iceland isn’t without its challenges. Which brings us to… 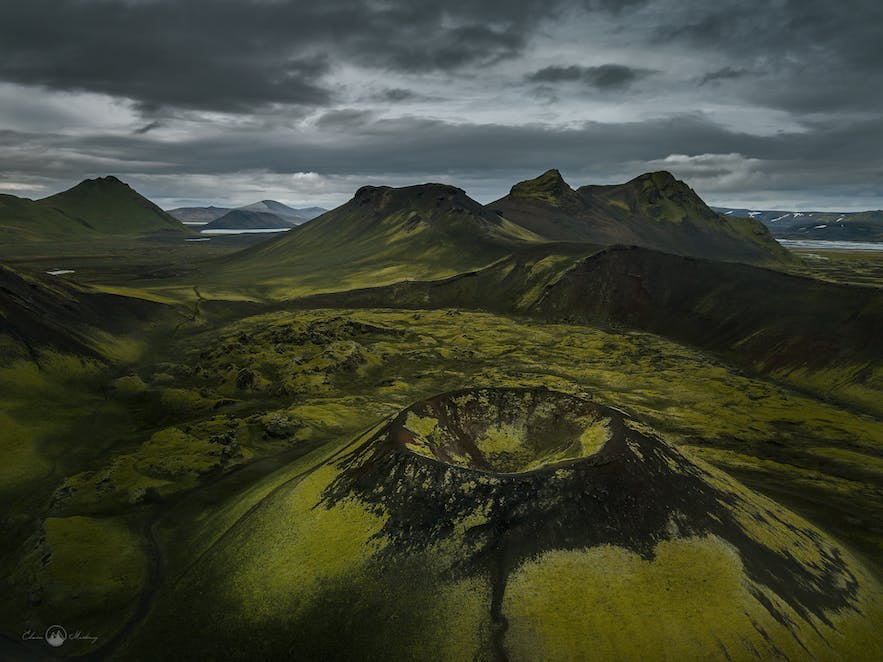 Sure, Iceland has very few tall obstacles and pretty much zero buildings once you get out of the main cities. But that doesn’t mean the conditions aren’t challenging.

For one thing, the weather here is temperamental to say the least. A popular phrase in Iceland is that if you don’t like how the weather is looking, wait half an hour for it to change. Conditions shift quickly, meaning that your judgement has to be on point every time you take off.

You need to be ready to move quickly if the weather takes a turn for the worse, especially when there’s rain or snow involved.

But arguably the biggest weather-related challenge to flying in Iceland is the wind. Getting great shots can be difficult when your drone is being buffeted from all sides, even with the most powerful models. High winds also test you in terms of efficiency: batteries have to work overtime and your flight times will be shortened dramatically.

Now, all of these might sound like a negative to flying a drone in Iceland. But challenges don’t have to be that way. There are plenty of silver linings.

For example, flying in high winds with reduced battery times will help pilots develop the ability to make the most of every second. Learning to adapt to weather conditions on the fly will add an important skill to your aerial photography. 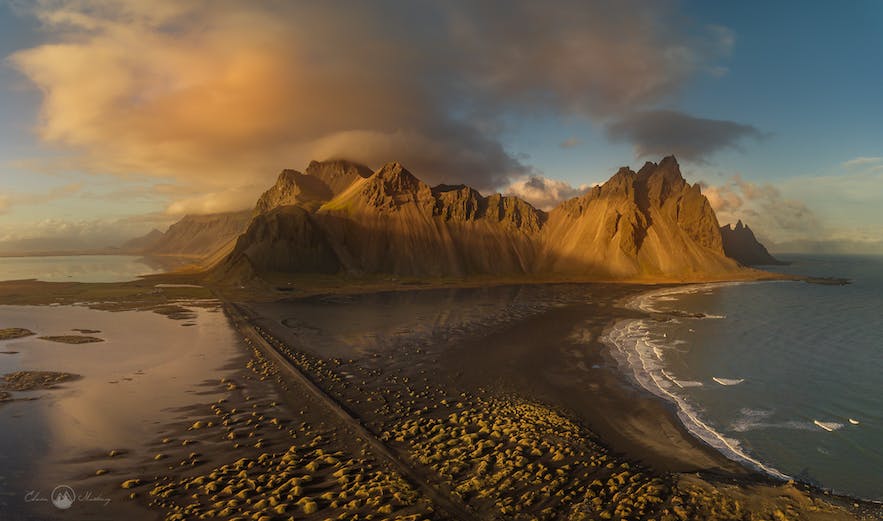 Most drone pilots and aerial photographers struggle to find decent places to fly beyond local parks and their backyards.

With an eye in the sky, the possibilities are endless: it’s just about finding the right destination.

So instead of being limited to the local green, an aerial photography adventure in Iceland offers pilots a chance to really make the most of the technology at their fingertips. It’s an ideal place to get the best out of your drone.

As we’ve mentioned already, Iceland’s scenery is second to none. If you’re looking to put together a portfolio of sweeping landscape shots and explore the edges of your creative potential, this is the place to do it.

In part that’s down to the sheer variety of natural sights. But it’s also down to how breathtaking they are on an individual basis. Get some aerial shots above one of the country’s many glaciers or waterfalls and you’ll quickly see that.

And then there’s the way the light combines with the seasons. Come in winter and you can capture the mystical northern lights. Come in the height of summer and have access to sunshine around the clock.

Finally, Iceland’s wide open spaces are ideal for newcomers to aerial photography. It’s hard to have an accident when there’s barely anything to crash into. But the weather conditions are still challenging enough to ensure that you learn to be adaptable, efficient and leave a better pilot than when you arrived. What’s not to love about that?

All of the above add up to make Iceland the perfect drone destination. Just make sure you fly within the rules, be considerate of other tourists and take plenty of accessories to keep things running as smoothly as possible.

Have you been wanting to fly your drone in Iceland? Our photography workshops are drone-friendly. Check out our 3-Day Photo Workshop in the Icelandic Highlands, which will get you off the beaten track!