Secure your place on this Midnight Sun & South Coast Photo Workshop, one of our most popular tours which will expose you and your camera to the very best sights that Iceland has to offer during the bright summer months!

Get ready to chase the glorious glow of the long golden hours created by the Midnight Sun, when sunset melts seamlessly into the sunrise. We will photograph Iceland during the midnight hour and into the early mornings when we are guaranteed to have the best light and the chance to avoid the crowds!

We will explore the spectacular waterfalls of Iceland’s magnificent south coast, much of which is covered by purple lupine fields. You will tiptoe around cute puffins when they return to the cliffs of Dyrhólaey to nest and capture the magical glacier lagoon, Jökulsárlón. No doubt, this summer photography tour has it all!

Across eight memorable days, we will take in the magical landscapes and unusual lighting conditions that have made Iceland one of the world’s premier photography destinations. Led by award-winning professional photography guides, this is one of the most excellent opportunities for landscape photographers looking to bulk up their portfolio.

Grab your gear; an Arctic summer paradise awaits! So join this brilliant photography workshop, and you too can capture the beauty of Iceland's South Coast, all under the Summer's Midnight Sun. Check availability by choosing a date.

Professional photo guide.
Transportation in a comfortable vehicle
Accommodation in hotels and guesthouses. Rooms with private bathrooms.
All breakfasts; Group Dinner on day 1 and 7 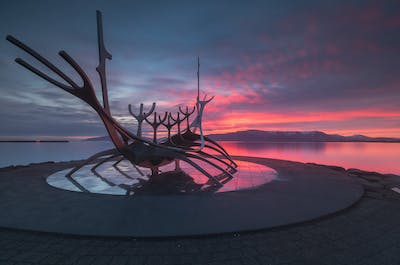 Day one begins with your arrival at Keflavík International Airport. You will take a bus or taxi to transfer to your hotel in Reykjavík, where you will be able to relax until 7pm. At this point, you will meet your guides and group in the lobby, and head to a distinguished restaurant for a delicious dinner. Over the meal, you’ll get to know the people you’ll be spending the next week with and run through the itinerary of the adventure ahead. When you are finally feeling full and satisfied, as well as eager to get on with the photography workshop, you’ll retire to your hotel for the night.
Read more
Day 2 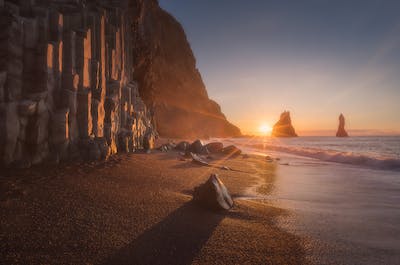 On your second day, the adventure truly begins! First thing in the morning, you will board a fully customised, comfortable bus, and set off on your journey along the South Coast. This stretch of coast is one of Iceland’s most popular tourist routes, lined with fascinating features which are great for—but even better for photography! Your first subjects will be two of the country’s most famous attractions, the waterfalls Seljalandsfoss and Skógafoss. Seljalandsfoss stands at 63 meters tall and falls in a narrow cascade in front of a small cavern.  If the path is clear, you will be able to walk behind it and photograph the feature from a unique angle, framing the lush green surrounds with the falling water. Meanwhile, Skógafoss will thrill you with its powerful cascades, thundering to the earth and emitting enormous clouds of spray. If the sun is shining, rainbows will arch throughout the mist of this waterfall, allowing you to practice working with truly unusual lighting phenomena. After capturing these waterfalls, you will continue along the South Coast to Reynisfjara. The endless stretches of black sands here are stunning and the power of the Atlantic ocean is incredible dramatic. Particularly of note are the Reynisdrangar sea-stacks, which rise tall from the surface of the sea.  At the end of the day, you will retire to accommodation in the nearby, charming village of Vík.
Read more
Day 3 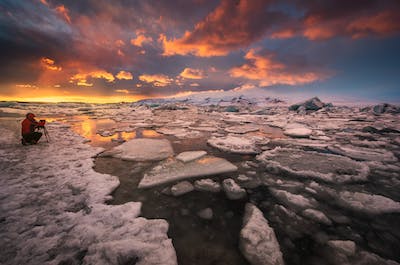 On day three, you will continue along the South Coast until you reach Vatnajökull National Park, a vast area that contains many of Iceland’s greatest subjects for photography. You can expect a range of subjects throughout the first part of this day, including lava landscapes, glacier tongues, waterfalls and desert-like stretches of black sands. The second part of the day will be focused on one location in particular: the mesmerising Jökulsárlón glacier lagoon. Jökulsárlón is a truly beautiful place, where vivid blue icebergs break from the retreating glacier tongue Breiðamerkurjökull and slowly float across the lake towards the ocean. Each iceberg is unique and makes for fascinating photography. On warm summer days, many seals can be seen lounging around on the ice or swimming in the crystal blue water, so you’ll have an excellent chance to practice your wildlife photography! Adjacent to Jökulsárlón is the famous Diamond Beach, a stretch of black-sand coastline where icebergs wash ashore after finally reaching the ocean. Here, you will have the chance to capture sun stars and the gorgeous golden glints hitting each iceberg. You will retire for the day in the Jökulsárlón area.
Read more
Day 4 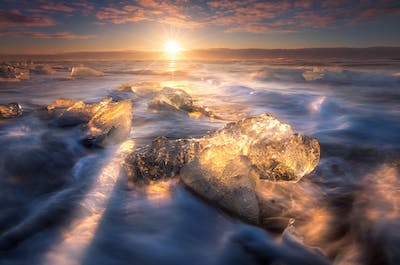 Your sunrise shoot on day four will be conducted back at Jökulsárlón, where the lighting conditions change dramatically, allowing you to produce completely different shots. You will also head back to the Diamond Beach for another shoot here. The beauty of this corner of Iceland could warrant days of shooting, but there is more to see in the region. Your photo guides will use today to take you to lesser-known spots only they and very few others know about. These will largely be in Vatnajökull National Park, and tailored to allow you to capture the unbelievable panoramas of South Iceland as well as the largest glacier in all of Europe. You will retire for the day in the Jökulsárlón area.
Read more
Day 5 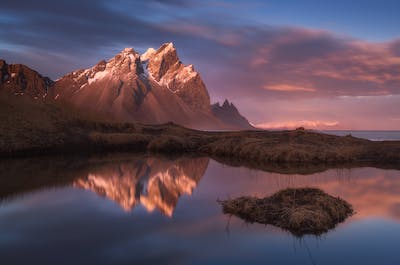 On day five of this summer photography expedition, you’ll have a sunrise shoot at the Diamond Beach. Following that, you will head even further east along Iceland’s South Coast, out of Vatnajökull National Park, to Vestrahorn mountain on the Stokksnes Peninsula. Vestrahorn can appear ominous, even under the glow of the Midnight Sun. Beneath this steep 454 metre high mountain, you will find many photogenic peaks and slopes. Foreground is the key here and the strong waves of the Atlantic Ocean crashing onto the beach can be used to frame the mountain in the background. You can photograph the mountain against the surrounding black sands, over dunes, or with epic seascapes, so a large part of this day will be spent exploring the Stokksnes Peninsula to find the perfect composition. You will stay here throughout the golden hours when Vestrahorn becomes shadowy and even more captivating. After a day of shooting at Vestrahorn, you’ll return to your accommodation.
Read more
Day 6 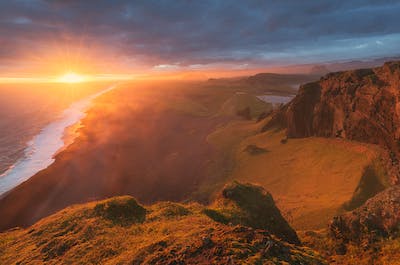 On your sixth day, you will visit the spectacular Skaftafell Nature Reserve. This area is often deemed a hiker’s paradise, though it has just as much to offer the avid photographer.  Many of the landscapes and features that make Iceland internationally famous as a natural haven are found within Skaftafell's borders. Glacier tongues, lagoons, waterfalls, forests, rivers, volcanoes and lava landscapes will all present themselves to you, one subject after another. You will spend the majority of the day shooting its many sites, continuing to practice your landscape photography; by this time in the tour, you will no doubt be able to notice a marked improvement in your skills. After capturing the magic of this beautiful reserve, you will head back to the South Coast, returning to Reynisfjara beach for another golden hour shoot. You’ll retire for the day at accommodation in Vík.
Read more
Day 7 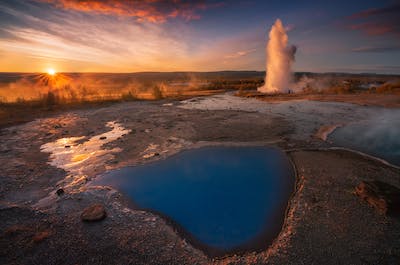 Day seven is your final full day of photography, and you will spend it shooting three of Iceland’s most famous sites: Þingvellir National Park, the Geysir Geothermal Area, and Gullfoss Waterfall, all on Golden Circle Route. Þingvellir is the only UNESCO World Heritage Site on the Icelandic mainland, being where the early residents formed their first parliament in 930 AD. While the history of this place is inspiring, it is the landscapes that you are likely to find most captivating. Located in a valley between the tectonic plates, you can shoot the walls that mark the edges of the continents, the lava fields that fill the area from eruptions in centuries past, and the many ravines filled with crystal clear spring water, opened by earthquakes in the area. Iceland’s largest natural lake, Þingvallavatn, also makes for a beautiful subject with its surrounding mountains. The Geysir Geothermal Area is the prime location on this photo workshop to photograph Iceland’s seething geothermal activity. The area is dotted with many fumaroles, hot springs and mud-pots, the earth is vividly coloured by the elements rising from the crust, and, of course, there are geysers on site. The largest of these, Geysir itself, is inactive, but you will have plenty of chances to shoot Strokkur, which erupts every five to ten minutes to heights which exceed twenty meters. Your final subject on this workshop will be one of Iceland’s most recognisable and renowned sites: Gullfoss waterfall. This incredible feature, the name of which translates to the ‘Golden Waterfall’, is immensely powerful, thundering in two tiers into a dramatic, ancient canyon. There are several platforms from which you can capture it. You will then return to Reykjavík for your final night.
Read more
Day 8 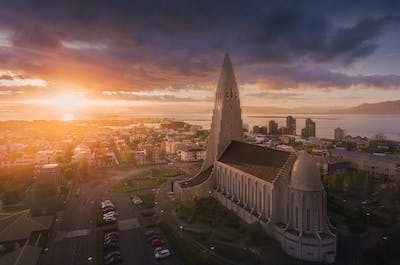 Sadly, this will be your final day in Iceland. When it is time, you will make your way back to the airport and depart home or to your next destination. Until next time, revel in the photographs you have taken during your trip! We hope you enjoyed your time in Iceland.
Read more