Chromatic Aberration – What It is and How to Avoid It

Chromatic aberration is one of those subjects that most photographers have heard of but only a small fraction truly understand. It can be quite annoying sometimes, and if you don’t know how to remove or minimise the impact of chromatic aberration in your photos, the loss in terms of quality could be huge. So what is this phenomenon and how can you actually control it?

What is Chromatic Aberration in Photography? 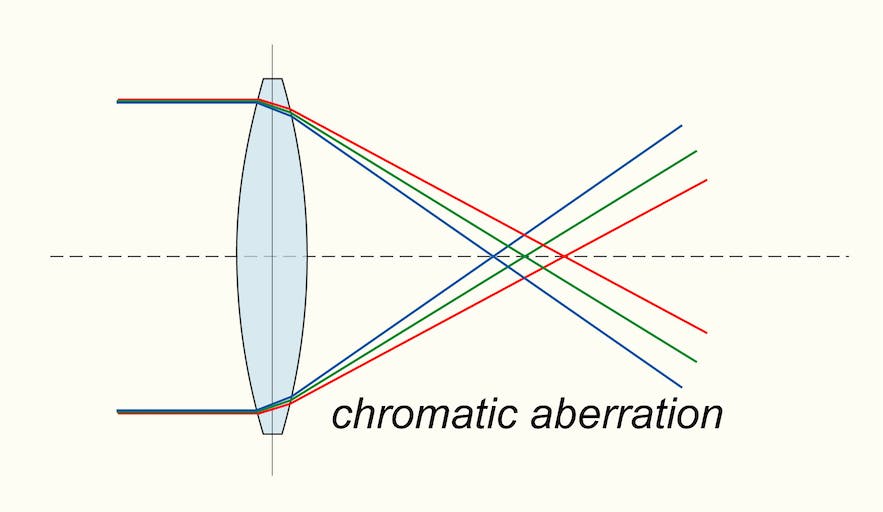 Chromatic aberration is an effect that occurs when a lens is not able to properly refract all the wavelengths of colour in the same point. It’s quite a common problem in photography that affects almost all lenses, though high-quality lenses will present with less chromatic aberration compared to lower-quality ones.

In simpler words, and as you can see from the photo below here (which is a roughly 100% crop of the original), chromatic aberration consists of some annoying colour halos that appear where they shouldn’t be. In this case, you can clearly see them along the edge of the mountain.

Chromatic aberration along the edge of the mountain. Photo by: 'Leonardo Papèra'.

Why Does Chromatic Aberration Occur?

Dispersion also has something to do with chromatic aberration: the refracting index (a number that tells you how fast the light is able to pass through a certain material) of the lens elements is different for various colours. For example, blue wavelengths of light are able to pass faster through a lens compared to red wavelengths of light. This difference in terms of refracting index affects the focus in your photos, and that’s when you get some of those annoying colourful halos along the edges. 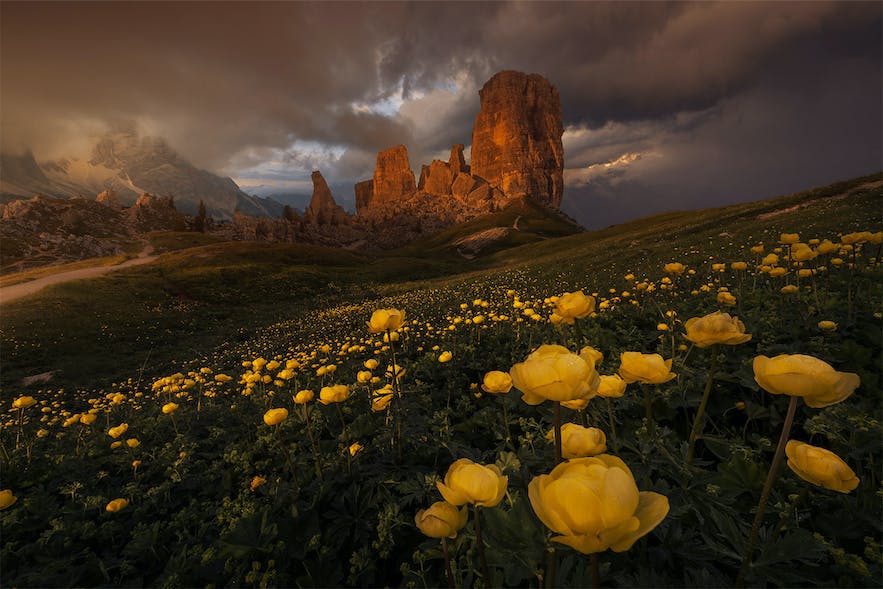 Check for colourful halos around the edges of subjects in your images. It may be chromatic aberration. Photo by: 'Leonardo Papèra'.

Longitudinal aberration (LCA), also called “bokeh fringing”, occurs when the lens is not able to properly focus all the different wavelengths of colour on a determined focal plane. You can easily recognise this kind of chromatic aberration since you’ll see the unwanted colour fringing all around the frame, even in the centre, especially in the out-of-focus parts of the image.

TCA won’t be minimised if you stop down the aperture of your lens, since it doesn’t depend on it. You can recognise this kind of chromatic aberration as it appears along high contrast edges, where perhaps there is a sharp transition between bright and dark areas. It is typical of short focal lengths.

Chromatic aberration is known also as “purple fringing” or more generally as “colour fringing”. As these names suggest, it’s because you can easily recognise it as thin, colourful lines along the high-contrast edges of the frame, or in the out-of-focus parts of it.

The more common colours of chromatic aberration that occur are magenta (hence purple fringing) or green, but they can be also blue, red, yellow, etc.

How to Avoid Chromatic Aberration

We've talked about what chromatic aberration is, why it exists and what it looks like. At this point, you may be quite discouraged, thinking that you've just discovered a new “problem” to deal with when taking pictures.

Well, allow me to cheer you up a little bit: it is possible to learn to control and possibly avoid chromatic aberration altogether! There are a few techniques you can use which will at least minimise the impact of chromatic aberration on your images, so let's take a look at what they are.

I’ll start by saying that you should shoot in RAW, not just for the chromatic aberration, but for a million other reasons. If you are passing your pictures through post processing software after you have snapped them, then you shouldn’t even consider shooting in JPEG. The only way to have a usable base shot for editing is by shooting in RAW.

By shooting in RAW you’ll have more data recorded which you can experiment with using the settings of post-production softwares such as Adobe Lightroom or Adobe Camera Raw. With a little bit of practice, you’ll manage to remove chromatic aberration almost completely from your pictures.

High contrast scenes are the most sensitive areas to chromatic aberration, where it is more visible. Of course, if the shot you have in mind requires you to work in high contrast situations, then you won't be able to do much about it and you should still take the shot. However, if you have the chance to choose between shooting with some high contrasts in the frame or not, I’d rather go for the latter one since you won’t have to deal with the evidence of chromatic aberration later on.

To deal with this, you have two options: the first one is to use a prime lens, which will handle chromatic aberration much better, while the second one is not to use the minimum/maximum focal lengths of your zoom lens and just to use the ones in between. You can crop a little bit or do a panorama to replicate the minimum/maximum focal lengths of the lens if you wish.

Playing with your aperture will be particularly helpful in minimising the effect of longitudinal chromatic aberration. How? Well, easy: by stopping down at least one or two stops (or more) from the widest aperture of your lens.

Using small apertures can also mean that you'll need to slow your shutter speed or raise the ISO, but it will help you reduce chromatic aberration in the long run.

So we've talked about how you can minimise longitudinal chromatic aberration by closing down the aperture of your lens. What about the transverse chromatic aberration? Well, there’s an easy trick to avoid that too! If you paid attention before, I wrote that TCA won’t appear in the middle of the frame but it will be visible just around the edges of the picture. As such, if you place your subject in the centre of the frame, it won’t be affected by chromatic aberration.

What about if you want to place your subject in the bottom or top thirds of the frame, or close to the edges? Well, you can place it in the centre while you are shooting and then crop the image to achieve the composition you were looking for!

How to Correct Chromatic Aberrations in Lightroom

We've talked about how to avoid chromatic aberrations while shooting on the field, but what about if you weren't able to reduce them for some reason and you still have some annoying colour fringing? Don’t worry, Adobe Lightroom will take care of it!

There are two options that will help you to remove chromatic aberrations in Lightroom: the first one is to make the software do its magic and go for the automatic correction, while the second one is to work on it by yourself with the manual correction.

Let’s start with the easiest option. In order to find the automatic CA correction in Lightroom, make sure you are in the 'Develop' section of the software.

Next, scroll till you find the “Lens Correction” window, as you can see in the picture above.

At this point, all you have to do is tick the “Remove Chromatic Aberration” box, and let the software do everything for you.

Honestly, Lightroom does an excellent job at dealing with chromatic aberrations. You'll see that 99% of the time, you won’t even need to know how to manually correct them.

Check out the before and after: the shot above here is without the “Remove CA” box ticked. As you can see, the picture clearly shows some fringing. Meanwhile, in the photo below, there is no visible chromatic aberration at all. Magical, right? 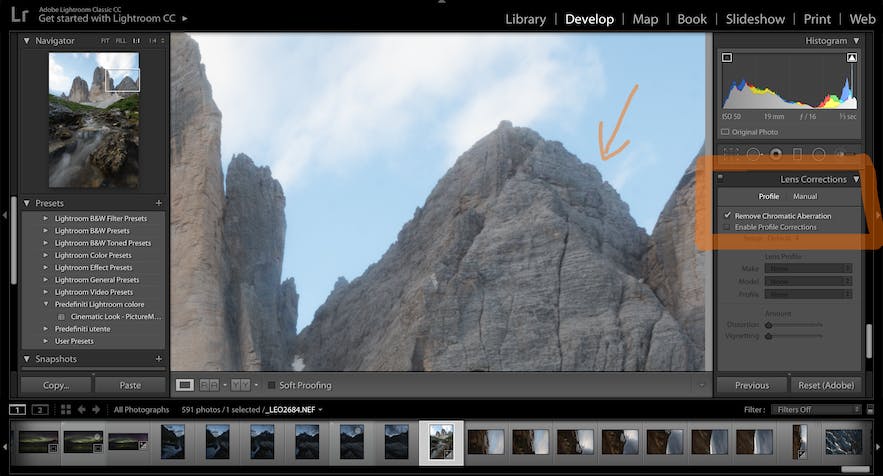 So, let’s repeat the process as in the photo above, but instead of taking advantage of Lightroom’s magic, we’ll try to remove chromatic aberrations on our own. Why? Well, because sometimes the software auto-correction is not able to completely solve the problem, so it’s good to know how to deal with it on your own in case you are stuck with CA. 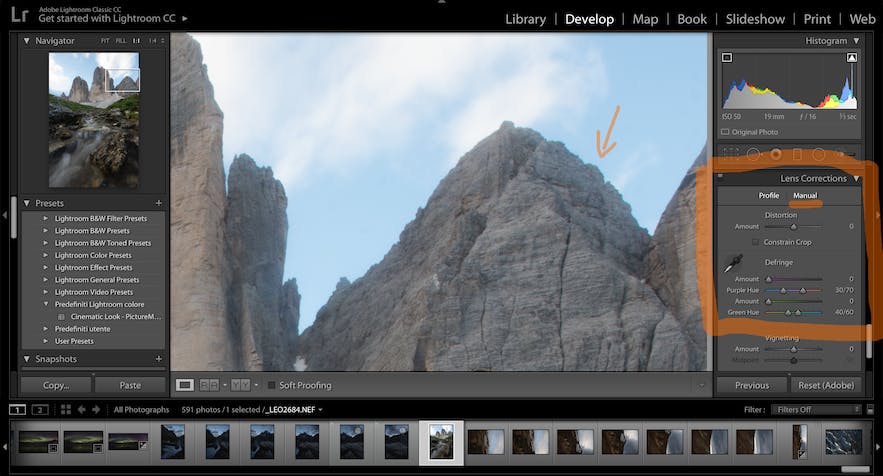 Again, start in the 'Develop' section of Lightroom. Then, open the “Lens Correction” window as you did for the auto-correction, but instead of remaining on the “Profile” box, switch to the “Manual” menu. You should have the same settings as in the photo above.

Now, you have two options to move forward: the first one is to use the “Fringe Colour Selector” – that eye-drop that you see right on the upper left side of the 'Defringe' window. You can select the affected areas and Lightroom will try to remove the CA from those specific areas by changing some of the parameters.

The second option is to play with these parameters by yourself, which is what I did in this case as the eye-drop wasn’t working perfectly.

As you can see in the photo below, I played a bit with the Defringe Green slider and the Green Hue, to find the right point where all the chromatic aberration is removed.

You’ll have to do some practice if you want to remove chromatic aberration manually, but the results can be quite amazing! I always recommend that you try auto-correction first, as it can be a real time-saver! 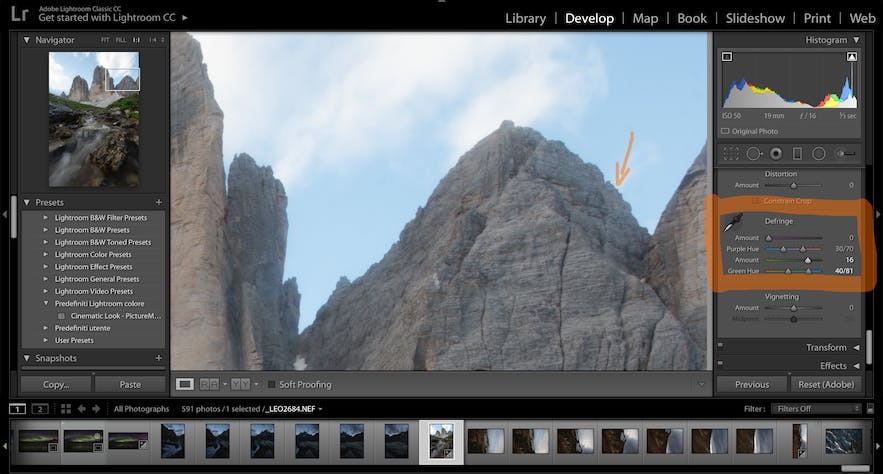 How to Test Your Lenses for Chromatic Aberration

To test how well (or bad) your lenses are doing against chromatic aberration, just Google “Chromatic Aberration Test Chart” and download one of the free models. Next, open it in full screen mode (and at max brightness) on your PC. You can also print it and take a few shots with the lens you want to test.

You’ll be able to easily see how much that lens is affected by chromatic aberration when you open the shot you took on Lightroom and zoom in on the dots a little bit. 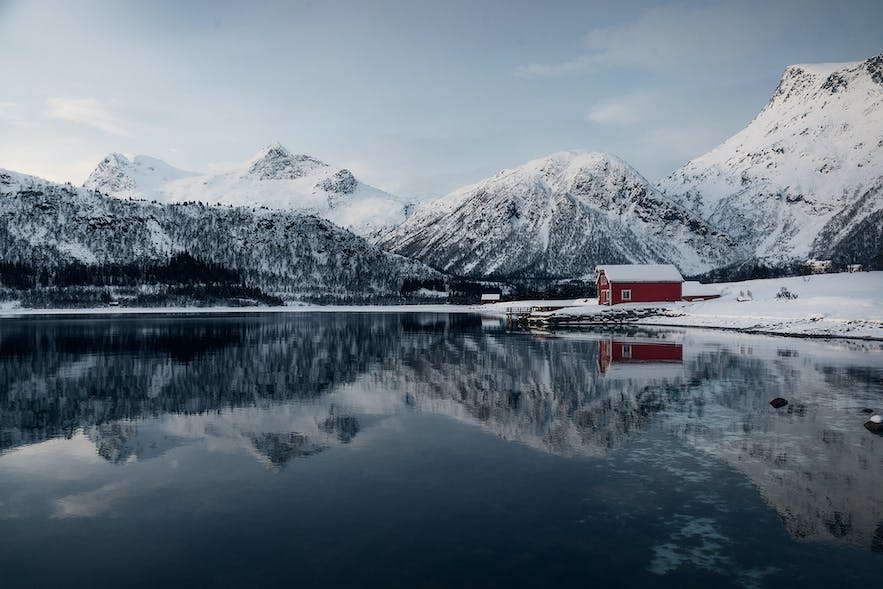 About the author:  Leonardo Papèra is a landscape photographer based in Italy. You can find more of his work on his website or by following him on Instagram.