In the summer of 2018, DJI launched a pair of drones that got aerial photographers all over the world talking: The Mavic 2 Zoom and the Mavic 2 Pro.

Both are upgrades on the original DJI Mavic Pro – a popular, portable, highly-capable drone that found a great balance between being practical to travel with and high-spec enough to capture awesome photos and videos.

In short, DJI didn’t need to tweak too much.

Its 12mp 1/2.3″ CMOS camera has the equivalent of a 24-48mm optical zoom and 2x digital zoom. The ability to shoot with 4K lossless zoom at full HD video resolution is pretty cool and there are plenty of creative possibilities that come with it.

But this review is focused on the Mavic 2 Pro, which was co-engineered with Swedish camera specialists Hasselblad. The Mavic 2 Pro’s camera has a 1-inch CMOS sensor with a 10-bit DLOG-M colour profile. DJI says it captures four times more levels of colour per channel than the original Mavic Pro… which is a lot.

The Mavic 2 Pro can snap 20-megapixel stills and has an adjustable aperture from f/2.8-f/11. It also comes with Hasselblad’s Natural Color Solution (HNCS) technology, for improved clarity and accuracy. 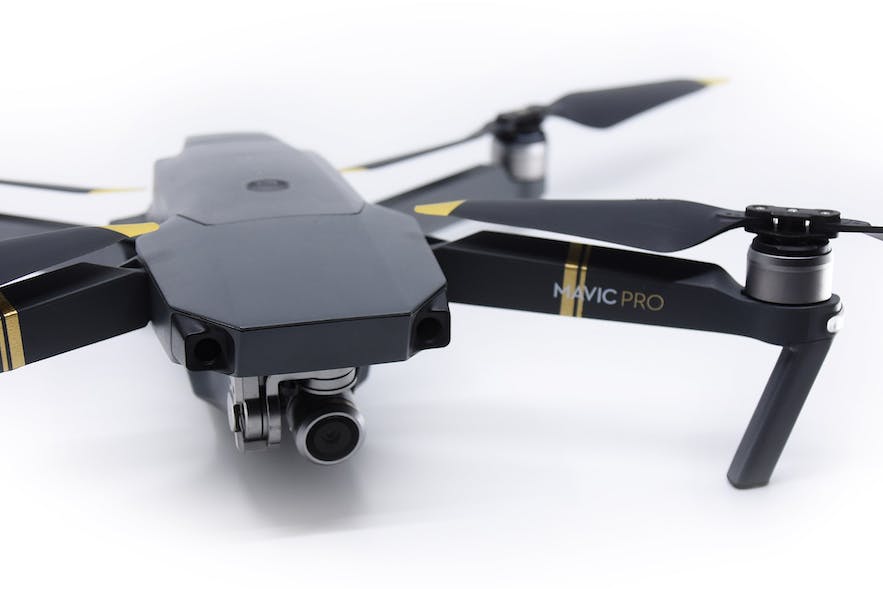 If you’ve flown a DJI drone before, then you’ll be used to operating a flying camera that is responsive, easy to use and packed with creative features to help you capture original, inspiring content.

The DJI Mavic 2 Pro is no different. In fact, the latest model goes above and beyond the original in pretty much every department.

It’s best to go through the specs in terms of how important they are for aerial photography. We’ve done the camera now but what about the range, portability, flight time and safety features? 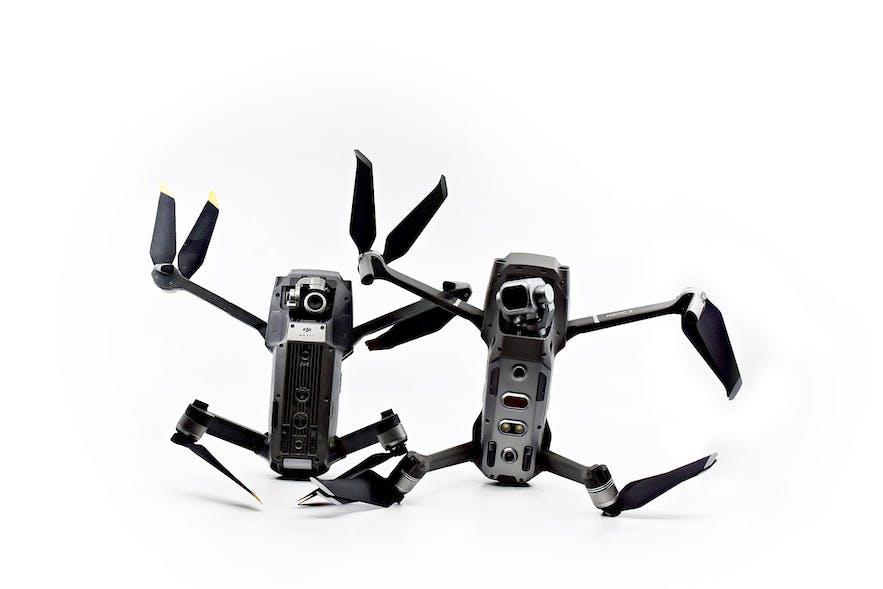 Let’s start with the range and flight time. If you want to capture awesome landscape images and have enough time in the air to get all the videos and photos you want, these two factors are vital.

The flight time on the DJI Mavic 2 Pro is 31 minutes, which is pretty much as good as you can get with photography drones at the moment. The range is even more impressive: DJI’s OcuSync transmission system streams 1080p video to your phone, tablet or controller and offers an operating range of up to five miles. Five miles! Flying your drone beyond line of sight and that far away is illegal in pretty much every country, but it’s nice to know that the potential is there. 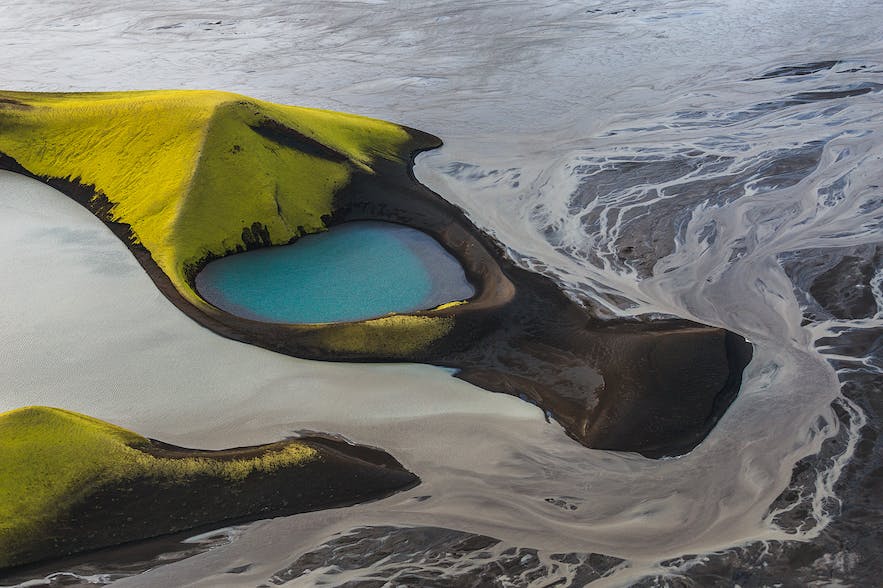 Now for portability. The great thing about the DJI’s Mavic series compared to the Phantom or Inspire range is that it is foldable. This means it’s nice and compact for when you want to head out with a small bag and capture scenes with a bit more spontaneity.

The Mavic 2 Pro weighs just 907 grams, so it’s a little heavier and bulkier than the original but still easy enough to carry around and travel with. You can unpack the Mavic 2 and be up in the air within seconds, providing you’ve done all your updates of course! And it’s small enough to fit inside a regular rucksack.

Flying a drone isn’t hard, but it isn’t easy either. Luckily the Mavic 2 Pro comes with a bunch of features to take the stress out of flying and help eke out every drop of cinematic potential.

Let’s start with the safety features. The last thing you want to do after spending over $1,000 on a drone is to crash it. The truth is that expensive accidents are common in the aerial photography game. But thanks to companies like DJI and their investment in computer vision, those accidents are becoming rarer.

The Mavic 2 Pro has omnidirectional collision avoidance. This, combined with DJI’s Advanced Pilot Assistance Systems, stops you from flying straight into obstacles, whether they are above, below, behind, to the front or to the side.

Accidents can still happen and the technology isn’t perfect, but it will still save you time and time again. Like most drones, the Mavic 2 Pro also has a smart return-to-home function. So it will keep an eye on your battery levels and never let you fly to the point of falling out of the sky. 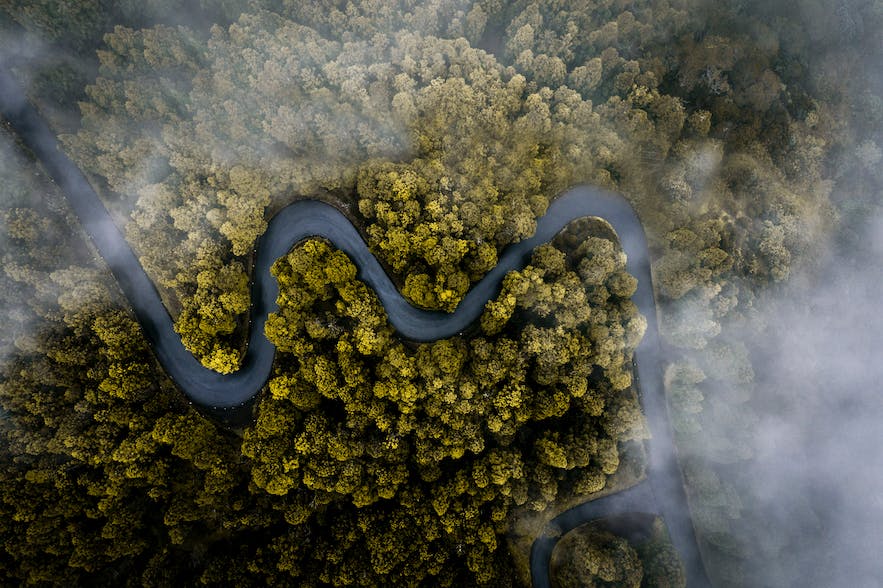 A drone can give you a different impression of the world. Photo by: 'Unsplash'.

Then there’s DJI’s Geofencing system, which is designed to make sure you don’t fly where you shouldn’t or get into trouble while behind the controls. The system locks off sensitive locations like airports to keep your drone and other people safe.

All of those features keep you flying rather than crashing. But DJI’s Mavic 2 Pro also comes with a bunch of creative tools to ensure your footage looks sleek and professional.

These include an array of autonomous flight modes. As mentioned above, flying isn’t especially hard, but flying while capturing cinematic videos is another challenge entirely. With practice, you can get to the point where your videos are smooth and top-quality.

But in the meantime, DJI has a number of one-touch flight modes that will send the drone on pre-programmed, cinematic paths in relation to a point of interest of your choice.

There are four types of Hyperlapse to choose from: Free, Course Lock, Waypoint and Circle. Simply set the interval between shots, the total length of the video you want to create and - depending on which mode you’re in - choose a path, altitude or point of interest. 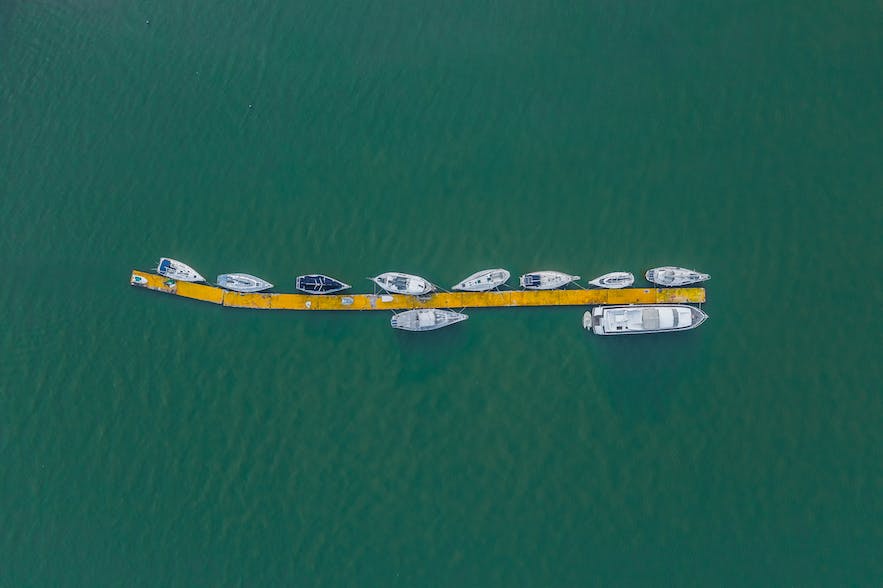 New functions with the DJI Mavic 2 Pro allow you to get more creative. Photo by: 'Unsplash'.

DJI’s camera and sensors will track a subject of your choice – usually a vehicle or a person – in one of three different modes:

You can also launch ActiveTrack in Safe mode, which turns on all of the sensors to prevent accidents. 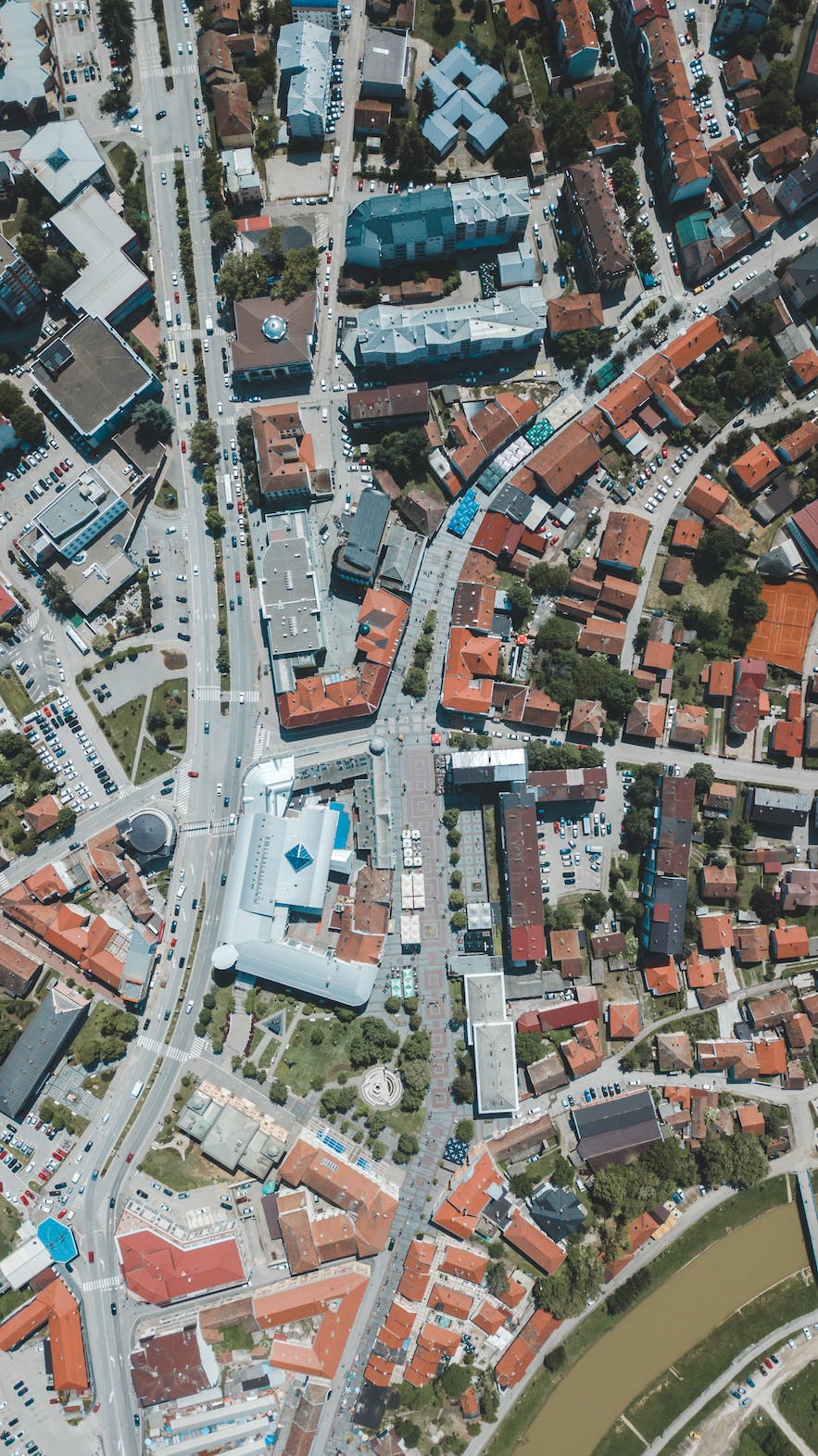 The last thing you want is an accident with your drone. Photo by: 'Unsplash'.

A range of one-touch creative shots that you can activate in seconds, including Dronie, Helix, Rocket, Boomerang, Asteroid, and Circle.

Simply tap on the view where you want the drone to go.

Select a point of interest and your flight settings and the drone will fly accordingly with the subject staying in view.

There are a few accessories we definitely recommend if you want to take your time with the Mavic 2 Pro to new heights.

First up are DJI’s Low-Noise Propellers. These next-generation props have an altered, more aerodynamic design than the standard set. The result is quieter flight, increased power efficiency, and even a slightly extended flight time.

The main plus is the sound. Rather than changing the volume drastically, the props cause the drone to fly with a much lower pitch, which is perfect if you’re not keen on drawing attention and want to fly without causing a scene.

Second is a set of Anamorphic lenses. Filter company Moment launched a set specifically for the Mavic 2 Pro. They even tested them out in Iceland, which you can see in the video below.

These lenses slightly distort the frame to give you cinematic black bars and a distinctive aspect ratio without losing out on image quality. Shooting videos in anamorphic also leads to lens flares and plenty of buttery bokeh – creative elements we all love.

Typically anamorphic gear costs thousands of dollars. You can buy a set of Moment’s lenses for the Mavic 2 Pro for under $300.

Similarly, DJI and a bunch of third parties offer sets of neutral density filters to augment your aerial photography. These give you greater control and more consistency when shooting in challenging light conditions, and are well worth the extra investment.

The final add on to consider is DJI’s Smart Controller. It saves you the hassle of flying with a phone or tablet and instead streams your high definition feed straight to a screen built into the controller.

Should You Buy The DJI Mavic 2 Pro? 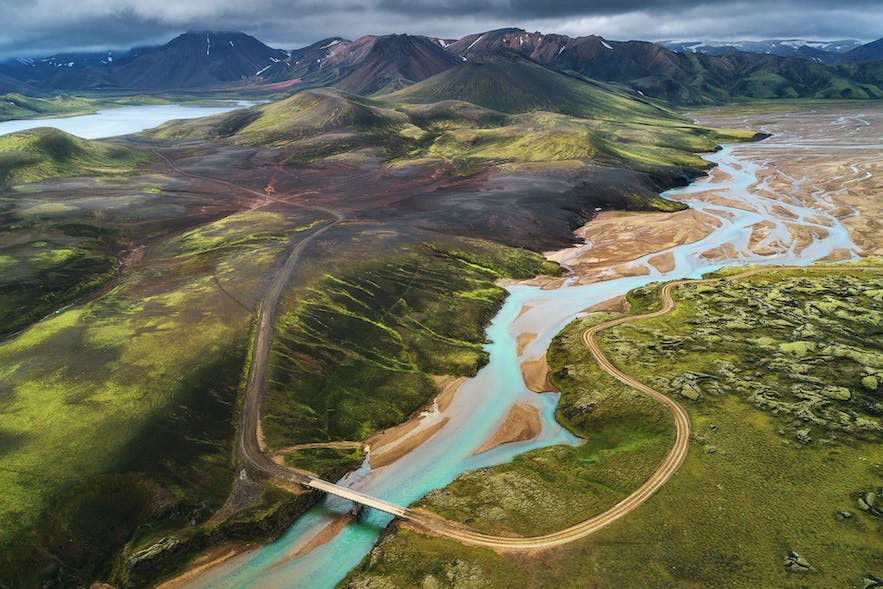 The DJI Mavic 2 Pro currently sets the standard for aerial photography, with a great balance of camera quality, portability, ease of use and safety. Although it’s one of the most advanced off-the-shelf drones on the market, it’s also accessible and easy to fly - even for beginners.

If you want to shoot landscapes and have the flexibility to fly at a moment’s notice, this is probably the drone for you. All of the Hasselblad camera’s settings are at your fingertips so it’s easy to create great compositions in no time at all. Paired with DJI’s range of one-touch flight modes, you will be creating cinematic photos and videos straight out of the box.