A long, long time ago – that is, in the days of film photography – it was a rather difficult task to learn how to produce properly exposed pictures. There was no instant feedback with a digital display and the only way to see how good of a job you did in exposing the scene was to wait until the picture was developed.

Nowadays, regardless of your skill level or how advanced you are with any photo editing software, as long as you are using a digital camera, then there's a slice of digital information that can help you to instantly adjust your camera settings in order to take a picture with near perfect exposure.

This piece of information might probably even be something that you may have noticed before, but never really paid too much attention. Indeed, I'm talking about the so called histogram, which is often overlooked by landscape photographers or even completely ignored.

Yes, I understand... that strange diagram with the mountainous peaks might seem too technical to go into too much, especially when you have an LCD display on the back of your camera to show you the picture that you just took. However, I believe that there are number of ways to improve your photography once you understand how to read the histogram so in this article, we will explore the technical aspects of it, as well as ways in which to incorporate using the histogram with your workflow on the field and in post processing.

Breaking Down the Histogram

First, let’s try to break down what it is exactly that is represented in the histogram. If you look at any histogram, you will notice two axes – horizontal and vertical. The horizontal axis represents the number of tones and their level of brightness, starting from 0 (pure black) up until 255 (pure white). On the other hand, the vertical axis represents the number of pixels at each level of brightness. So, if you follow the line within the histogram, the highest ''mountain peaks'' will tell you exactly where on the brightness scale you have the most amount of information in the image. If the ''mountain peaks'' are stacked more towards the left side, then even without looking at the actual image, the histogram is telling you that it's dark. On the contrary, if the peaks are towards the right side of the histogram, then the image is bright.

This is probably the most essential aspect of the histogram that you will need to remember. For your image to be correctly exposed, you will need to stay within those walls on each side of the histogram. If you expose beyond those walls, then in photographic terms we call it clipping. So, if any part of the histogram reaches the right side of the wall, the image is considered to be overexposed. This means that every single pixel that reaches this wall will be represented as pure white. In simpler terms, all you will see in the overexposed part of the image is nothing else but white pixels. Similarly, if the histogram touches the left side of the wall, it's considered to be underexposed and you are left with pure blacks.

Take a look at this picture. Here, you have a visual representation of how an underexposed, overexposed and correctly exposed histogram looks like. 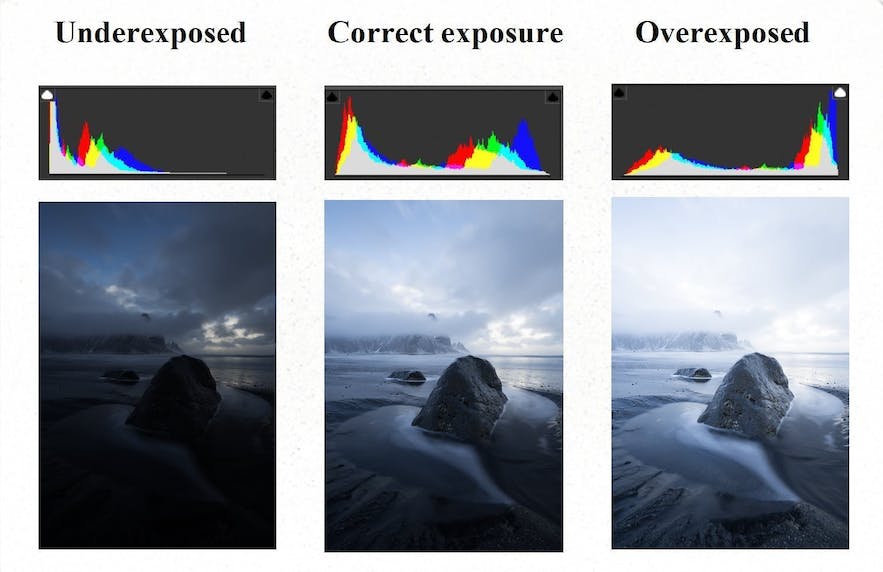 Now we’ve established that overexposing and underexposing is something that should generally be avoided, however, there will be certain situations when the dynamic range or difference between the darkest and brightest parts of the scene are so high, that it's virtually impossible to capture them without clipping either the shadows or highlights.

Of course, you can use neutral density graduated filters to compensate for the difference or even bracket the shot and correct the exposure in the final image during post processing. However, let’s imagine that you don't have these options or the scene is too complex to bracket without failing miserably. In this case, it is advised to underexpose the scene rather than to overexpose.

Modern digital cameras are capable of recording quite a lot of information about the details in the underexposed areas, which will allow you to bring them out later during post processing. However, it is virtually impossible to recover any of the information in the overexposed areas. Additionally, some cameras are more capable in one aspect than another. For example, Nikon cameras perform better at recording the details in shadows, so Nikon users have to worry less about underexposing than, for example, Canon users. On the other hand, Canon cameras have a higher capability in relation to recording details in the highlights than Nikon users.

Expose to the Right!

I would like to mention another aspect of the histogram that might be worthwhile to learn. As I said before, every scene is different and on the whole, there's no such thing as an ideal histogram as it depends entirely on what are you shooting. However, there's one piece of advice you might have heard before and I suggest that you listen to it – that you should expose to the right! 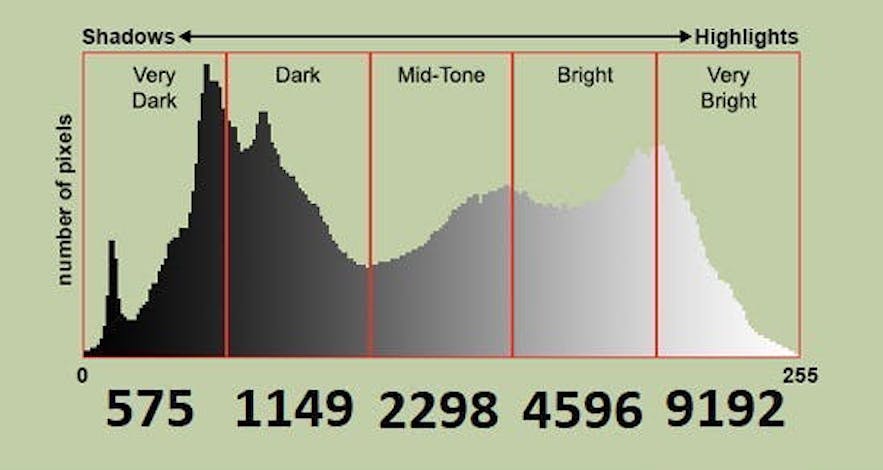 Pixels and tones in a histogram. Photo by: 'Kaspars Dzenis'.

The first section only has 575 tones available, while the next one has 1149 tones. These two sections make up the so-called ‘darks’ in the picture. The third section is composed of mid tones and has 2298 tones within it. Meanwhile, the last two sections represent the brightest parts of the picture and they have a combined amount of 13,788 tones available.

In simpler terms, if your picture is dark, you will only have a very limited amount of tones available to work with. Let's say that you would like to adjust the picture during post processing by increasing the brightness, contrast or any other changes. Lack of information about the tones will manifest in banding (pixelated gradients), increased noise levels and other problems. On the other hand, if you have a picture that is exposed towards the right side of the histogram, you are less likely to run into these problems during post processing.

The Back of your Camera Lies!

Another important aspect of learning to read the histogram is that once you understand it, there  is no need to rely solely on the LCD display built inside your camera. Why is it a good thing, you ask? Because the LCD display lies! 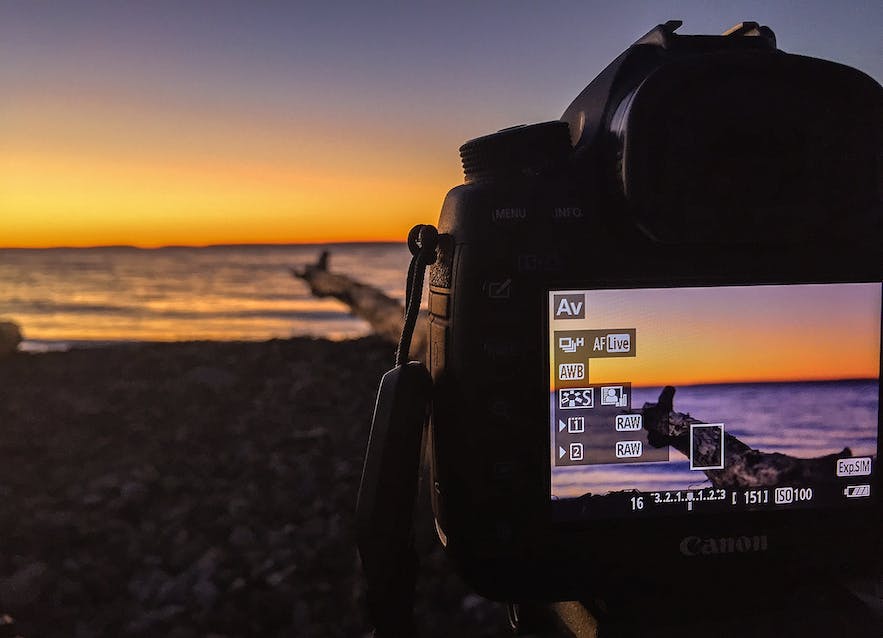 The LCD display on the back of your camera may be inaccurate. Photo by: 'Tony Webster, Wikimedia Commons'.

While your LCD can give you a reasonably good interpretation of the image, it is far from perfect when determining how correct the exposure is.

First of all, the LCD displays only a JPEG preview version of the image, even if you shoot in RAW. Besides that, the LCD screen has a much lower resolution than the image itself and the brightness level of the screen may be adjusted too brightly or too dimly to give an accurate interpretation.

This is especially important to remember when shooting in very bright or dark conditions. For example, when shooting the Northern Lights, while looking at the screen in these dark conditions, it might seem that the picture on the back of your LCD is correctly exposed, however, this is misleading. The reason that this occurs is due to the way our eyes adjust according to the viewing conditions. In this case, when viewing the picture it in the dark, it will look much brighter than it actually is.

Making Use of this Newly Learnt Knowledge

There are a number of ways to implement your new understanding of the histogram into your workflow. First of all, most modern cameras have an ability to represent the histogram on an LCD screen even before making a shot – through the live view mode. This way, you can adjust your exposure exactly, even before you take a shot.

Ideally, I would suggest that you make a habit of checking the histogram after each shot. If that sounds too tedious, then you can at least use the ''highlight alert'' function that is built into the camera. Once your shot is taken, it is possible to view the image and to allow the camera to detect if there are any areas that are overexposed.

Additionally, you can also use your knowledge of the histogram while making adjustments to an image during post processing. Increasing or decreasing the brightness during post processing may result in the loss of pixels. By keeping the histogram display open while you are processing in your software of choice, you’ll be able to monitor when clipping occurs and prevent it from happening. 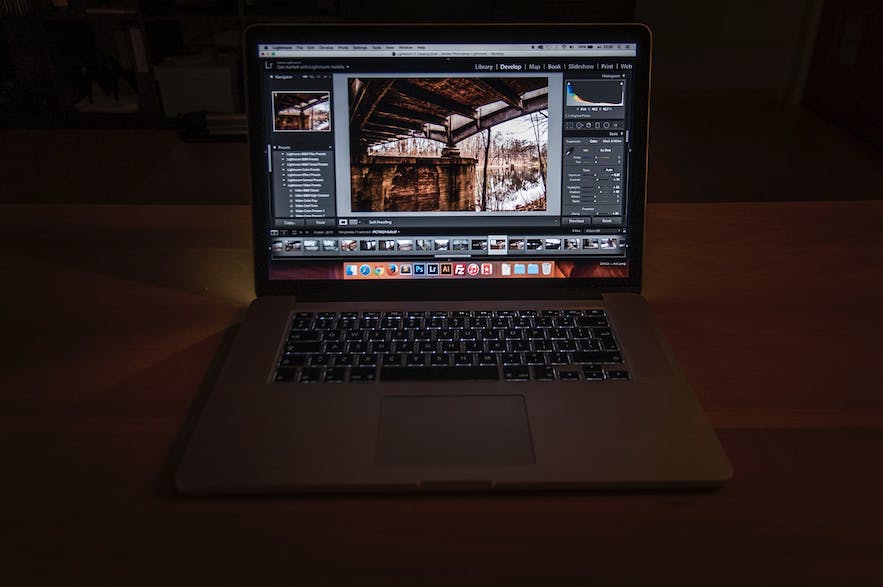 Monitor the histogram using software during post-processing. Photo by: 'Pexels'.

Being able to read the histogram doesn’t necessarily make you a professional photographer, but learning how to use it can be very helpful at times. I hope that this article has helped you to understand the basic principles behind the histogram and that with time, you will be able to incorporate this knowledge into your workflow and ultimately improve upon your own photography.

Moreover, if you ever end up doing photography in Iceland, you will learn quickly how dynamic and unpredictable light conditions can be in this ‘’photographer's paradise’’. By having this extra tool in your possession, you will be able to capture these magnificent scenes much better, which will certainly come in very handy.

About the author: Kaspars Dzenis is a landscape photographer based in Iceland. You can find more of his work on his website or by following him on Facebook and Instagram.

Learn all about histograms in-field and on-location in Iceland. Join one of our workshops to improve your landscape photography skills in no time!