Háifoss is More Than One Waterfall

The second highest waterfall in Iceland is Háifoss (The High Waterfall). Fed by the river Fossá (Waterfall River), it is located at the edge of the Icelandic Highlands (usually defined as the interior area of land above 350 meters in altitude). It is a popular attraction for a good reason, especially for photographers, as both the waterfall and its surroundings are quite impressive.

The fall is 120 meters and, like most waterfalls in Iceland, its volume varies between seasons. In spring and early summer, the volume is higher than in winter as the snow in the Highlands melts and groundwater finds its way to creeks and streams, eventually collected by the river Fossá. In winter, everything is frozen in the Highlands and water sources for the river and waterfalls are limited.

Háifoss is the second highest waterfall in Iceland - view from the parking lot - Granni waterfall is to the right. Photo by: 'Einar Páll Svavarsson'.

Although not too deep in the Highlands, Háifoss wasn’t really discovered until the beginning of the 20th century. However, its grandeur and pure beauty is indisputable. Today, it is one of the jewels in the crown of natural wonders in Iceland.

The Gully, the Valley, and the Rock Face

After driving the somewhat difficult F road (Fjallveggur or mountain road) that is only accessible in a 4x4 vehicle, we stop at the parking lot. There, we cautiously walk to the edge of the gully to take in the stunning natural wonder from above. At that point, you realise that Háifoss waterfall is much more than just a stunning waterfall. Walking by the edge, there are a few places that provide the most exciting and photogenic view of the waterfall.

As you will see when you get there, part of the excitement is framing the water falling into the spectacular gully and finding the best balance between foreground and background while capturing the power of the falling water. A different point of view from below in the gully. Photo by: 'Einar Páll Svavarsson'.

The Brother From the Same Mother

Háifoss is placed almost at the deepest part of the gully, which is an extension of the valley Fossárdalur. It forms a spectacular foreground if you walk a bit south of the waterfall. However, a bit farther in is its brother and friend, Granni (Neighbour), another spectacular waterfall, also from the river Fossá.

As Granni is not as impressive, it is usually photographed as part of Háifoss. Together, both waterfalls bestow a unique motive to capture and make a visit to this beautiful site a joy. The waterfalls are spectacular even in winter, when the water and the drizzle form impressive sculptures and icicles. However, in order to reach Háifoss and Granni in winter, you will need a highly modified 4x4 vehicle. 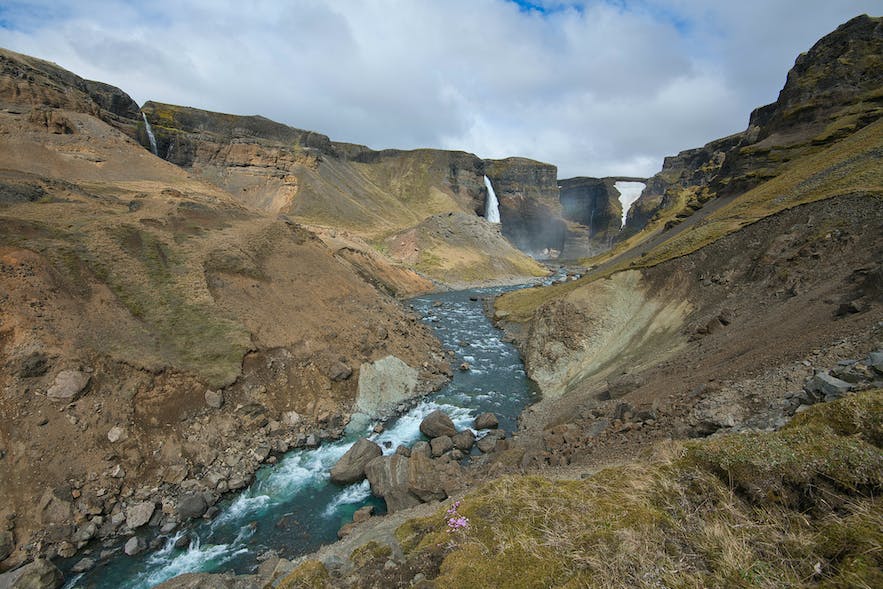 A view to the gully from Fossárdalur valley. Photo by: 'Einar Páll Svavarsson'.

The Advantage of an Additional Hike

As most landscape photographers know, walking around the scene and selecting a spot to place the camera is often quite rewarding. Around 95% of the visitors to Háifoss waterfall stop at the viewing panel and possibly a few steps north and south of the gully. However, walking the hiking track to the bottom of the gully is quite spectacular. 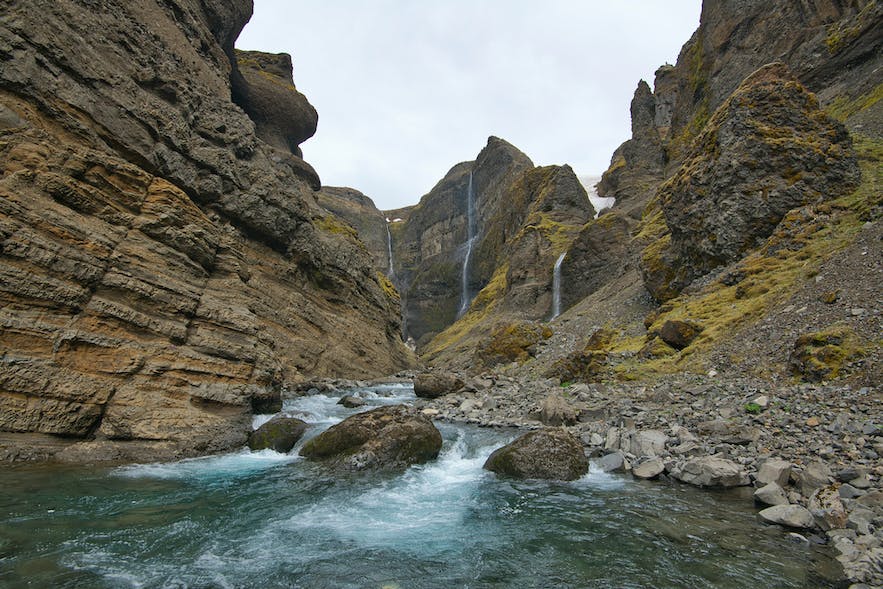 Even here, down in the gully, you will find a new photographic challenge. Photo by: 'Einar Páll Svavarsson'.

There, you will experience the real power of Háifoss and Granni as well as the roaring sound as the water falls to the ground, not to mention the layers of old lava forming the walls of the gully, extending the background to a new dimension. Even down in the gully, you will find a new photographic challenge. So, if you take full advantage of your visit to Háifoss, at least in summer when the bottom of the gully is accessible, you will see that there is much more to this natural wonder than just a waterfall.

Have you got a hankering for the Icelandic Highlands? Join us on a one-of-a-kind Camping Adventure into this mysterious and enchanting landscape!