Bask in the warm glow of the Midnight Sun and make the most of the endless daylight during summer in Iceland on this 2-day photography tour to the magical Snæfellsnes Peninsula. This photo workshop is perfect for keen photographers of any skill level looking to explore this exciting peninsula in the West of Iceland while improving their landscape photography expertise.

Departing from Reykjavík, this small group photography tour is designed to maximise the time that you’ll spend immersed in nature as you hone your camera skills in some of the most stunning scenery to be found on Earth. There’s a reason that the Snæfellsnes Peninsula is oftentimes described as “Iceland in Miniature" and you’ll soon discover why.

Summer is when this region really comes alive, blanketed in wildflowers and teeming with wildlife. You’ll have the chance to explore beautiful waterfalls surrounded by lush vegetation, vast lava fields covered in Icelandic moss and sweeping coastlines made all the more breathtaking by a backdrop of mountains and a majestic glacier.

You can sample all that Iceland has to offer, even if you have just a brief amount of time, as the Snæfellsnes Peninsula is a perfect reflection of some of the best sights to be found all over the country.

Some notable sights that you’ll visit include the charming black church of Budir, the small fishing village of Arnarstapi where you’ll be able to wander around rugged cliffs standing tall against the North Atlantic Ocean, as well as the famous Kirkjufell; a pyramid-shaped mountain best known as a filming location for ‘Game of Thrones’.

Along the way, your expert photo guides will treat you to some lesser-known sights as we take you off the beaten track. With so much excitement scheduled over two wonderful days, you’ll truly be experiencing the journey of a lifetime.

Discover the wonders of the Snæfellsnes peninsula under the Midnight Sun through your camera lense on this exciting summer photography tour. Check availability by choosing a date.

Professional photo guide
Transportation in a comfortable vehicle
Accommodation in hotels and guesthouses. Rooms with private bathrooms.
Breakfasts at hotel stays during the tour 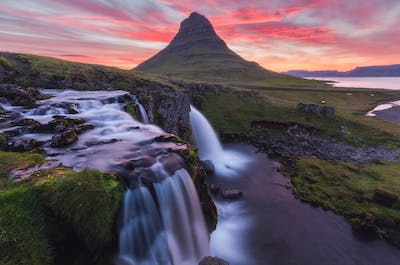 You’ll be picked up nice and early by your photo guide from Reykjavík and immediately begin the drive up towards the Snæfellsnes Peninsula. Be ready to witness your surrounds changing before your eyes as you near this stunning region, where volcanic craters dot the landscape and glaciers loom large upon the horizon. Your first stop will be at the vast Búðarhraun lava field, reaching east from the hamlet towards the sea by Faxaflói Bay. Standing tall and steadfast within this mossy landscape is the elegant black church of Búðir, surrounded by rich flora including a number of rare and protected species. The windswept grass that surrounds the church gives it a fairytale-like atmosphere, while the surrounding lava fields are brimming with interesting compositions ready to be captured on camera. Your next stop will be at the fishing village of Arnarstapi, where the stunning coastline meets the roaring waves of the North Atlantic Ocean. The tall, basaltic cliffs here have been shaped by the powerful movements of the water, making for a truly breathtaking sight. You’ll have plenty of time to wander around the viewpoints and explore to your heart’s content but make sure to capture Gatklettur, a captivating rock arch that sits by the shoreline. Throughout the rest of the day, your photo guide will take you to a number of impressive locations a little more off the beaten track, where you’ll find hidden waterfalls, beaches of black volcanic sand and even colonies of seals frolicking on the shore. After dinner in the town of Grundarfjörður, you’ll catch your first glimpse of one of Iceland’s most famous mountains, Kirkjufell. You may even recognise its unique, pyramid-shaped peak from the popular HBO series, ‘Game of Thrones’ or even the blockbuster film, ‘The Secret Life of Walter Mitty’. This mountain makes for a glorious sight, particularly as the Midnight Sun circles overhead, casting the entire area in a golden glow. There are numerous compositions to be found, from the flowing cascades at the mountain’s base to the gorgeous black sands and grassy fields that surround it. Your photo guide will be on hand to take you through each shot as you immerse yourself in the surroundings and the beautiful sunset light. You will retire for the night to your accommodation in the Grundarfjörður or Arnarstapi areas.
Read more
Day 2 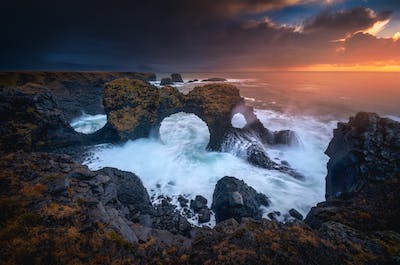 Day 2 - Snaefellsnes Peninsula & back to Reykjavik

On day two, you’ll get up early and continue your journey around the Snæfellsnes Peninsula, beginning at the volcanic pinnacles known as Lóndrangar. With the waves of the North Atlantic Ocean reaching up high around its base, this magnificent rock formation resembles a castle perched perilously high atop a cliff. It makes for an astonishing sight, set against the golden sky. You’ll be able to wander around, taking your time to hone your landscape photography skills as you capture it from a number of different viewpoints. The rest of the day will be spent at exciting and lesser-known locations, such as the classic white church of Ingjaldshóll surrounded by green hills and the bright, orange-coloured Skálasnagaviti lighthouse standing tall at the edge of the coast. A certain highlight will be the black lava pearl beach of Djúpalónsandur, where smooth stones give way to rock formations of varying shapes, resembling a Martian landscape. There is a lot in this region to photograph and see, so your photo guide will take you to the best locations that they have hidden up their sleeves. In the afternoon, you’ll begin making your way back towards the capital city of Reykjavík, arriving just in time for dinner and to explore the city's nightlife – perhaps even with the new friends that you’ve made during this trip – no doubt reminiscing over the wonderful time that you’ve had in just two amazing days in Iceland!
Read more