Discover the magic of autumn on this 7-day photography workshop into the heart of Slovenia and Croatia!

During this tour, you'll experience some of the most beautiful fall foliage across the two countries as you travel between the breathtaking Julian Alps and the extraordinary Plitvice Lake. Autumn is when the region is at its most photogenic, with the landscapes tinged in earthen hues around charming villages, forests, rivers and valleys. The unique weather conditions in this part of Europe often result in an enchanting atmosphere with layers of mist and fog creating surreal and fairytale-like moments. The serene ambience and captivating scenery is made all the more exquisite by the rich local history, culture and gastronomical delights.

For the duration of this tour, you'll be guided by two award-winning professional photographers, who will take you to the most astonishing locations to capture the jewels of Slovenia and Croatia as you chase the golden autumn light. They'll share their breadth of knowledge with you both in-field and out so that you can improve your photography skills and take your creativity to the next level.

This workshop is open to photographers of all skill levels. Whether you are a beginner or a seasoned professional, you can expect to experience the very best that Slovenia and Croatia have to offer in terms of landscape photography.

Don't miss out on your chance to capture the most picturesque time of year in Slovenia and Croatia! Check availability by choosing a date.

Accommodation (6 nights) double/twin rooms sharing (singles available upon request with single supplement)
All meals (three per day) and drinks
All transportation during the tour,
Photography tuition
Entrance fees and all local taxes 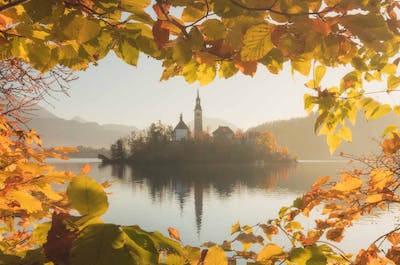 You'll arrive at Ljubljana Jože Pučnik Airport in Slovenia, where you will meet with your photography guides and your fellow travellers at 2pm. If you happen to arrive a day or two early, then feel free to explore the city at your own leisure and to make your way on this day to the lobby of our hotel at Lake Bled, where you'll be able to meet the group upon check-in at around 2:45 to 3pm. Once the group has settled in, we'll make our way to the stunning Lake Bled, where picture-perfect scenes await. Here, you will find a 17th-century church seemingly adrift upon the water, making for a truly breathtaking sight. Surrounding us will be some of the highest peaks in the Julian Alps, which are iconic in their own right. We'll spend our time strolling around the lake in search of wonderful compositions to make the most of the warm afternoon light as the sun sets upon the horizon. Thereafter, we'll return to our hotel where there will be some time to freshen up, before we meet again for our welcome dinner in the evening. This will be a good opportunity for you to get to know everyone a little better as you taste some of the delicious food and wine that is on offer. Your guides will go over the itinerary for the days ahead, so it's a great time to ask any questions that you may have.
Read more
Day 2 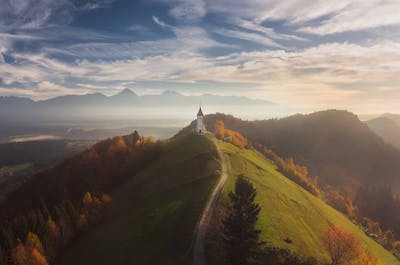 On day two, you'll rise early for a sunrise session back along the fairytale shoreline of Lake Bled. Thereafter, where you head for photography will depend largely upon the autumn foliage and the prevailing weather conditions. Fear not, as your expert guides will keep an eye on the forecast, ensuring that you'll be at all of the best places at the right times to take advantage of all that this spectacular area has in store. The majority of your time will be spent unearthing photogenic locations around the traditional Upper Carniola (Gorenjska) region for sunrise and sunset sessions, where charming castles, churches and villages are offset by a backdrop of majestic mountains. Though there will be no fixed itinerary, you'll have a lot of time to explore the breathtaking landscapes around Lake Bled and the Julian Alps, as well as to experience its rich cultural heritage.
Read more
Day 3 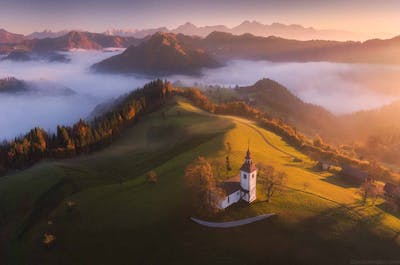 Among some of the highlights that we will visit is the spectacular 1.6km Vintgar Gorge within Triglav National Park. With its mindblowing turquoise water and incredible waterfall made accessible by a wooden walkway, this magical landscape hides a treasure trove of opportunities for photography all along the Radovna River. We'll take our time visiting several observation decks for vantage points over the rapids, taking in the peace and serenity as we unearth fascinating compositions between the gorgeous beech forests, draped in the glorious shades of fall.
Read more
Day 4 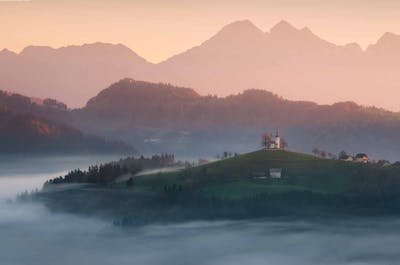 Within the romantic surrounds of the Julian Alps, you'll also find Jamnik Church, which is one of Slovenia's most famous destinations. Situated atop a hill with the Kamnik alps and Storžic mountain making for a stunning backdrop in the distance, this church is incredibly photogenic, particularly when surrounded by mist at sunrise. Nearby is the St. Tomaž church, which is one of the oldest churches in the region. If we are lucky, we'll be able to capture this very special place surrounded by a blanket of mystical fog during one of the mornings. If time allows, then we'll also make a visit to the 700 year old St. John church by Bohinj Lake. It's a very picturesque building that offers panoramic views of the surrounding mountains. At its foot is an attractive stone bridge and inside, you'll find some fascinating frescoes. Needless to say, our focus will not just be on the landscapes within this region; we'll also spend our time immersing ourselves in the local culture as we capture the ins and outs of daily life amongst the villages near the lake, including the famous hayracks unique to Slovenia.
Read more
Day 5 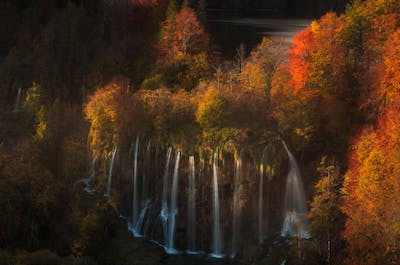 On day five, we'll have breakfast before heading out for a final sunrise session at Lake Bled. Thereafter, we'll pack our belongings and continue onwards to Croatia, into the breathtaking surrounds of the Plitvice Lakes National Park. This UNESCO World Heritage Site is a place of exceptional, raw beauty – famous for its turquoise lakes, pristine forests and cascading waterfalls. For the next two days, we'll take our time exploring the region, with its endlessly unique and awe-inspiring scenery. Here, you will find limestone rocks separating 16 spectacular lakes, surrounded by a valley of foliage dripping in hues of gold, red and burnt orange.
Read more
Day 6 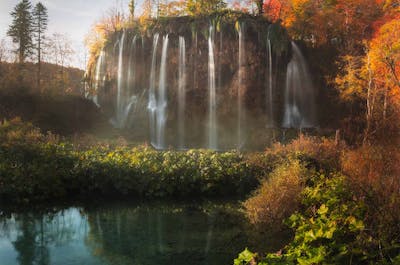 On day six, we'll continue exploring the Plitvice Lakes National Park, which sprawls over an area of 300 square kilometres. We'll chase waterfalls, immerse ourselves in the woodlands and capture the autumn vegetation as we follow a series of boardwalks and pathways throughout the Upper and Lower lakes. There is so much to photograph, including a variety of streams, canyons and caves. The diversity of landscape makes it the perfect place to practice experimenting with shutter speed for fascinating long exposure effects.
Read more
Day 7 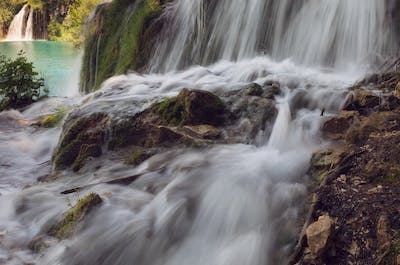 This will be the final day of our photography adventure. After breakfast, we'll head out for a sunrise session within the beautiful surrounds of the Plitvice Lakes National Park, before making our way to Zagreb International Airport. Depending on the traffic, we anticipate to arrive at the airport around 12 to 1pm in the afternoon. As such, we kindly ask that you book any flights for after 3pm, to accommodate for any delays.
Read more

The tour is always dependent on weather, as the weather can indeed be highly unpredictable.

Iurie Belegurschi is an award-winning fine art nature and landscape photographer, as well as the founder of Iceland Photo Tours.

Born in Moldova, Iurie developed an interest in photography from an early age after his uncle converted the family bathroom into a darkroom.

Iurie moved to Iceland in 2006. Drawn in by the incredible light and landscapes, he began traveling the country, with the camera in hand, in search of inspiration and honing his skills. Continually winning awards in international photography competitions, his images have been published and put on display in a number of leading publications and exhibitions.

In 2012 Iurie founded Iceland Photo Tours, with the ambition of sharing the many wonders Iceland has to offer with passionate photographers from around the world.