Discover the fairytale enchantment of Saxon & Bohemian Switzerland on this 7-day photography tour to Germany and the Czech Republic!

The area that borders these two countries is one of the most spectacular regions in Central Europe, where rolling green hills and valleys meet with the gorgeous Elbe sandstone mountains, picturesque castles, dramatic rock formations and primeval forests as far as the eye can see. Amazing scenery awaits you in this incredible national park that encompasses the hinterland on either side of the Elbe river.

Across seven spectacular days, you'll discover the natural beauty and historical charm that makes this part of Germany and the Czech Republic so unique. Photographic opportunities abound from small streams to cascading waterfalls, wild gorges and woodlands to forests of beech trees swathed in the earthen hues of fall. The atmosphere is somewhat akin to the fairytales of the Brothers Grimm, so be prepared for a captivating experience like no other.

During this tour, you'll have three professional photography guides on-hand. They'll share their breadth of knowledge with you to ensure that you'll get the most out of your travels as you develop your photography skills in-field. You'll have the opportunity to participate in a number of post-processing sessions, as well as to receive valuable feedback, which will no doubt help you to take your photography to another level.

Immerse yourself in the intriguing forests of Saxon and Bohemian Switzerland on this epic photography adventure! Check availability by choosing a date. 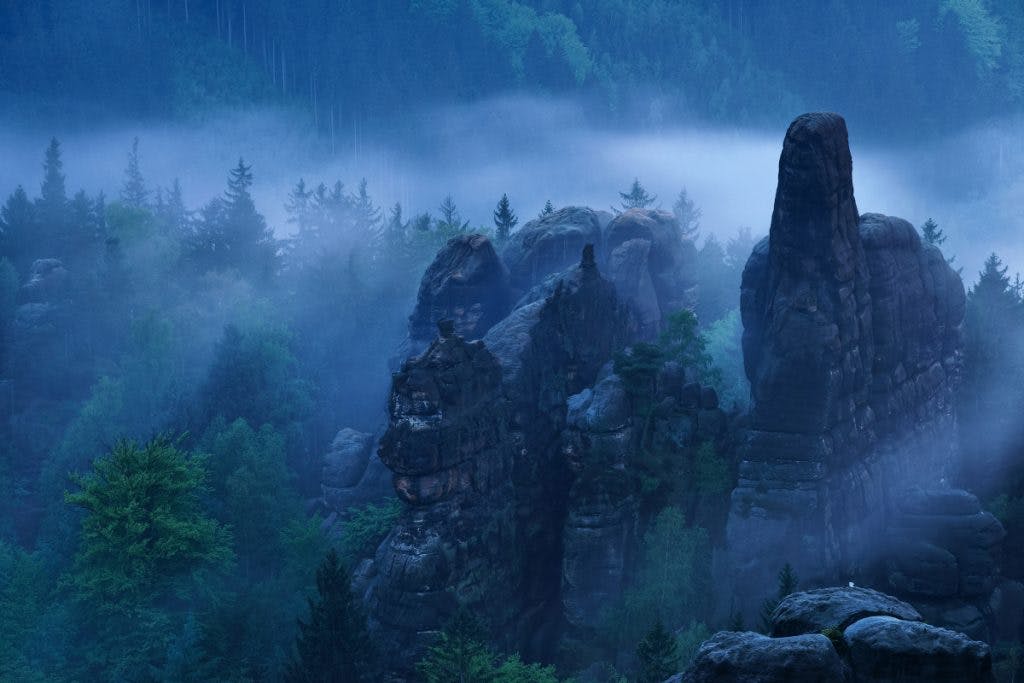 On day one, you'll arrive to Dresden in Germany no later than 12pm noon, where you'll be met by your photo guides. They'll give you a brief overview of the itinerary for the days ahead before the adventure well and truly begins!

There is no fixed itinerary during this photography workshop. This will enable you to make the most of the weather conditions in this spectacular part of the world, so that you can take home a plethora of incredible images. Your guides will monitor everything from the changing light at sunrise and sunset to precipitation, fog, wind and clouds to ensure that you'll be perfectly placed to capture extraordinary shots, no matter what nature throws at you.

Over the course of seven days, you'll have the chance to photograph as many sites as possible within Saxon and Bohemian Switzerland. Highlights of this workshop include but are not limited to:

- The breathtaking view from Bastei, a stunning rock formation that features an amazing bridge. This is one of the most famous rock formations in all of Germany with many platforms offering panoramic vistas over the small towns and villages that line the shores of the Elbe river below.

- The hilltop fortess of Königstein, built atop a rock plateau and which is the largest castle in Germany that is still intact.

- The spectacular rocky ridge of Schrammsteine with Falkenstein in the background and overwhelming, sweeping views over the vibrant valley.

- Pravčická brána (Prebischtor), the largest natural sandstone arch in Europe. It makes for an awe-inspiring sight in autumn, particularly during the golden hours which light up the spectacular fall scenery.

- Exploring the winding paths of the expansive Tiské stěny rock labyrinth, with its fascinating rocky outcrops where the 'Chronicles of Narnia' was filmed.

- The wild and romantic valley of the Kirnitszch and Kamenice Rivers, lined by the beautiful colours of fall.

WHAT LEVEL OF FITNESS IS REQUIRED? A normal level of fitness is required to participate in this workshop. If you have any physical limitations, please let us know in advance. WHAT LEVEL OF PHOTOGRAPHY IS REQUIRED? This photography workshop is open to people of all skill levels, from beginners through to seasoned professionals. WHAT CAMERA GEAR SHOULD I BRING? We suggest that you bring your own camera, lenses, tripod and a laptop. After you sign up, we will send you a detailed packing list. Feel free to contact us if you are considering purchasing new gear prior to your travels.

We highly recommend that you get a travel and medical insurance. Your own domestic medical insurance and private health scheme will not cover you whilst you are overseas. The tour is always dependent on weather, as the weather can indeed be highly unpredictable.