9-Day Winter Photo Workshop in the Lofoten Islands of Norway

Experience the magical fairytale surrounds of the Lofoten Islands on this enchanting 9-day winter photography workshop!

This extraordinary archipelago of islands is situated in the Norwegian sea and is connected by a series of tunnels and bridges. Characterised by towering mountain peaks, majestic fjords, a gorgeous coastline and charming fishing villages, it is no wonder why the Lofoten Islands are on the bucket lists of many landscape photographers.

During winter, the spectacular landscapes of Lofoten are swathed in a pristine layer of white snow. The nights are long while the days are short – the photos that you capture will be made all the more unique by the ethereal Arctic light.

Over nine exciitng days, we'll make our way across the islands, chasing the elusive dance of the Aurora Borealis over breathtaking beaches, deep fjords and more. Throughout the workshop, you'll have a professional photography guide on-hand to take you to the most inspiring locations at the best times, making sure that you'll be in all the right places to take advantage of the beautiful conditions whenever they arise.

Your guide will ensure that you'll improve upon your photography skills as you immerse yourself in the captivating scenery of this must-see landscape photography destination.

Don't miss out on the adventure of a lifetime in Norway's Lofoten Islands! Check availability by choosing a date.

Professional photo guide
All Transportation during the tour
Accommodation 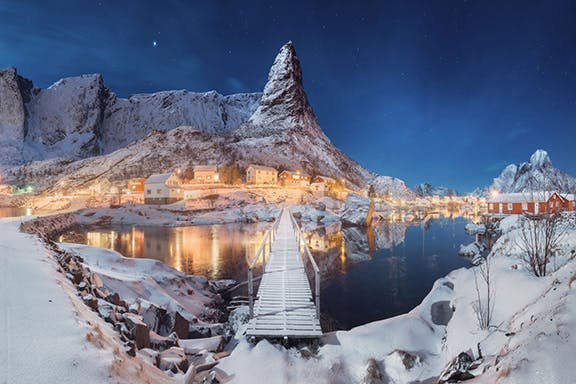 You'll arrive to the town of Leknes in the heart of the Lofoten Islands in Norway, where your photo guide will pick you up from the airport and transport you to a local hotel. There will be some time to rest and freshen up, before you meet with your fellow travellers for a delicious meal at the hotel restaurant in the evening.

Over dinner, you'll get the chance to know one another a little better as your photo guide goes over the itinerary for the days ahead. Make sure not to eat yourself into a food coma though, as you'll be heading out to photograph the Northern Lights tonight, should they make a display in the night sky!

Thereafter, you'll head to bed in anticipation of an early start the next morning. 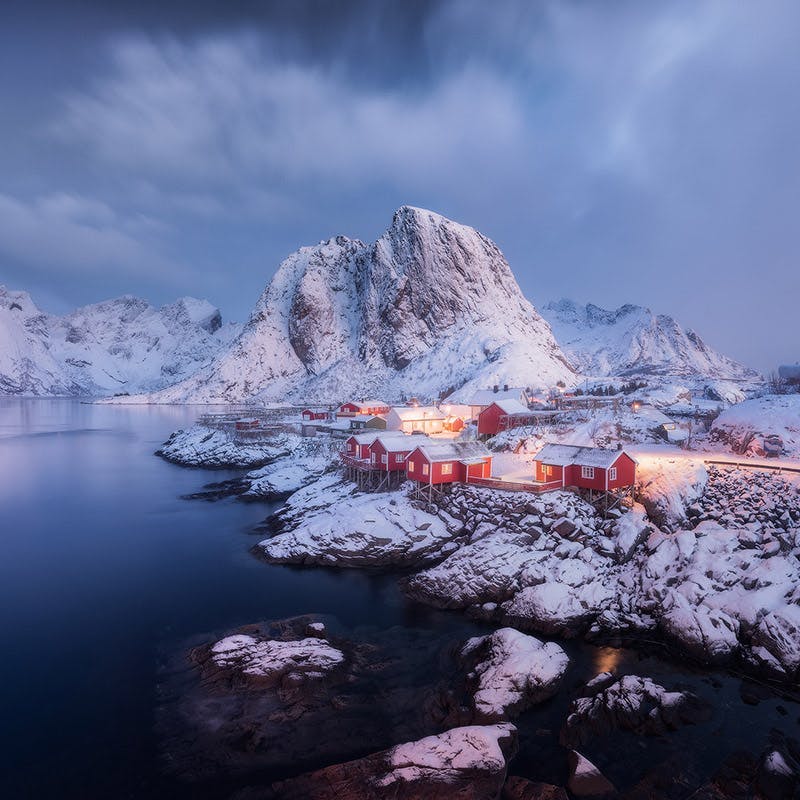 On day two, you'll rise early for breakfast, then check out of the hotel and begin the journey towards the small fishing village of Reine. There will be a lot to photograph along the way, though your focus for the next three days will be upon the traditional red 'rorbu' cabins that embody the charm of the Lofoten Islands.

Your base for the next few nights will be in these red cabins at the base of a spectacular mountain, situated right upon the edge of the fjord. They make for a cosy retreat at the end of each day, completely heated and fully-equipped with kitchen and bathroom facilities.

Staying in this area means that you'll be well-located for sunrises, sunsets and of course, the Northern Lights. The surrounding scenery, snow-capped peaks and red rorbu make for an enchanting scene every morning, night and day.

There is a lot to photograph around Reine, including the well-preserved Nusfjord village in Flakstad, the iconic Fredvang bridges, Selfjord mountain peak and the rocky shores of fjords. We'll take our time capturing it all as we take in the winter fairytale charm. 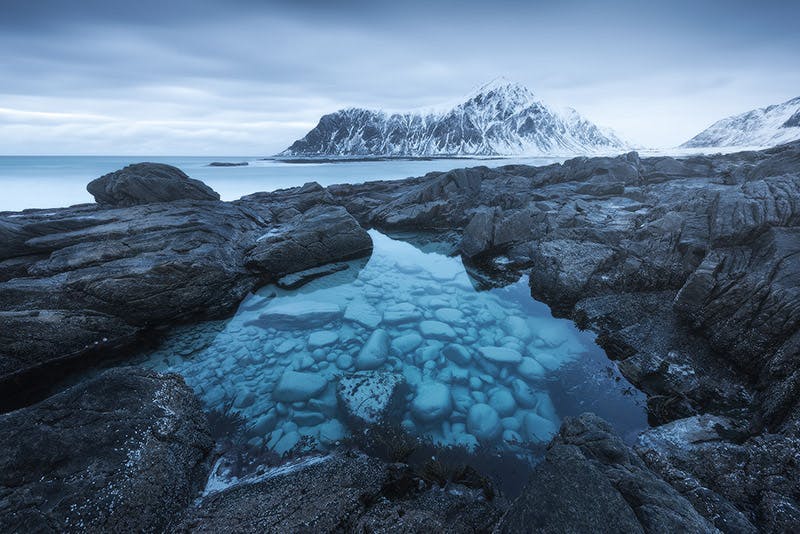 On day five, we'll leave Reine behind and make our way back to Leknes, where we'll situate ourselves for the next three days as we explore the Arctic Beaches of the Lofoten Islands. The coastlines of Lofoten are some of the most pristine and scenic in the entire world, characterised by rocky shores, golden sands and shimmering turquoise water. We'll take our time exploring the most picturesque beaches for photography, including Uttakleiv, Haukland, Skagsanden, Unstad and Vareid.

At Uttakleiv beach, you'll find beautifully shaped rocks, worn down over time by the rolling waves of the sea. Amongst the rocks are a number of pools, which make for stunning foregrounds should the Northern Lights come out to play.

Nearby is Haukland, which was once voted Norway's best beach. This tranquil part of the coast is largely sheltered from the wind by mountains all around, making for a pleasant location for photography.

At the extraordinary Skagsanden beach, you'll find ripples in the sand, left behind by the waves at low tide. They make for stunning leading lines into the snowcapped Hustinden mountain, which is perhaps Lofoten's most-photographed peak and majestic backdrop.

Meanwhile at Unstad beach, you'll have endless opportunities to practice wave painting, as world class waves crash into the shore. If you're lucky, you may even catch a surfer riding the crest of a wave as it rolls into shore!

Last but not least, Vareid is a beach that you'll want to return to time and time again. This is a location where stormy weather brings out the essence of the landscape, with jagged peaks in the background and smooth, colourful rocks in the foreground.

If you haven't already guessed, all of these beaches are perfectly situated to photograph the Northern Lights! If the skies are clear and there is Aurora activity, then we'll be out every night hunting this elusive atmospheric phenomenon. 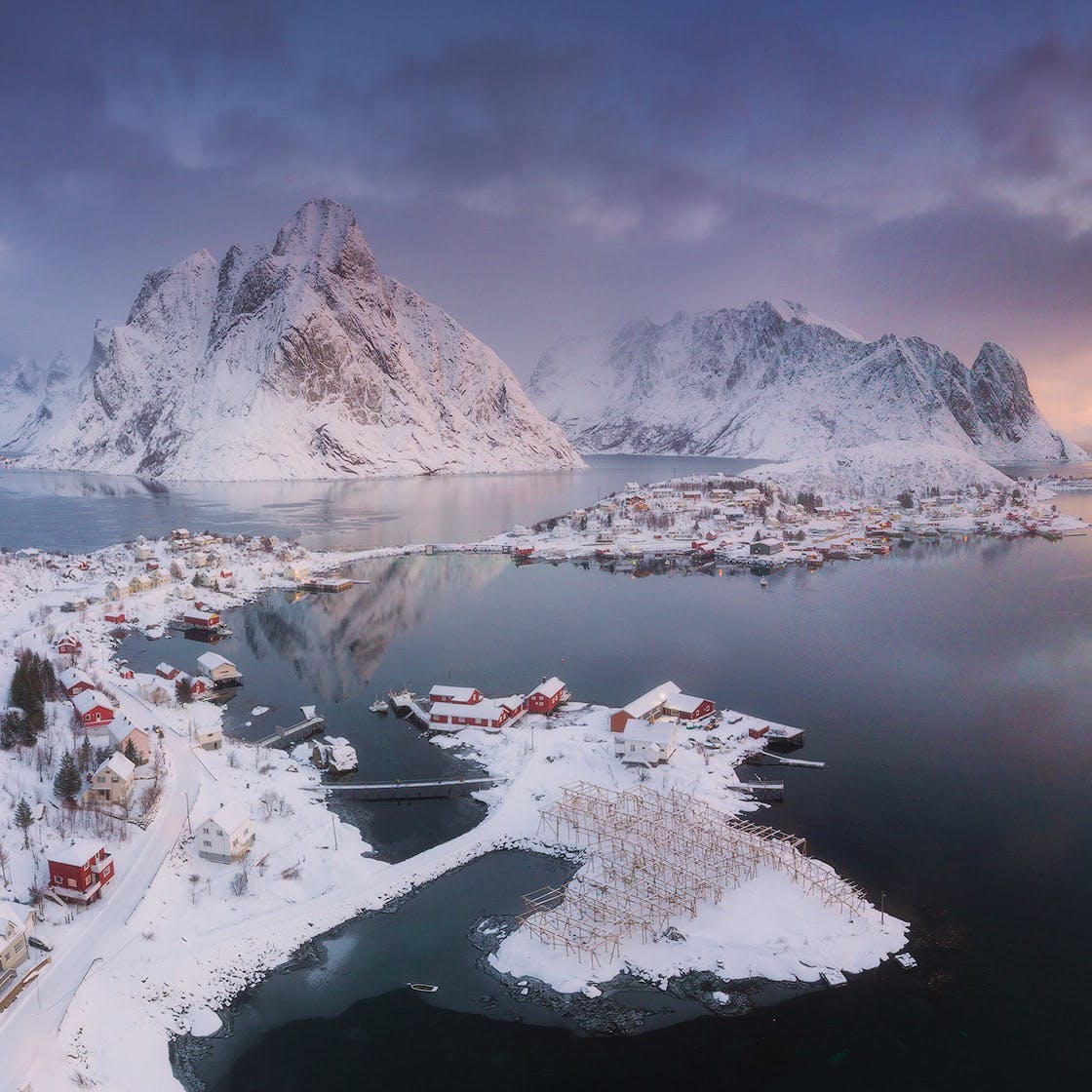 On day eight, we'll explore the idyllic fishing village of Ballstad, where fisherman's cottages dot the snow-covered landscape and mountains surround you at every turn. The harbour is the busiest in all of the Lofoten Islands, so there will be a lot to see, experience and photograph.

Depending on the wishes of the group, you may use this day to return to some locations that you have already visited, to catch them under better lighting conditions. Otherwise, your guide may take this opportunity to reveal some locations off-the-beaten track to round out your Lofoten adventure.

In the evening, you'll have one last dinner together as a group, during which you'll be able to re-cap upon your time spent in the Lofoten Islands and to celebrate with a final hurrah! 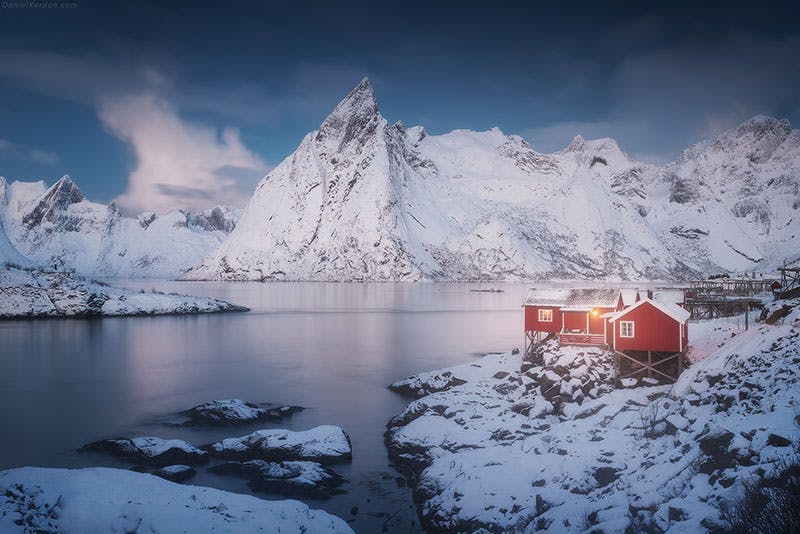 This will be your final day in the Lofoten Islands. After breakfast, you'll be transferred back to Leknes airport, where you'll be able to fly back home or onwards to your next destination – no doubt with memory cards full of photos to remember an incredible trip to this Norwegian archipelago!