The Faroe Islands is a forgotten place that few travellers have even heard of, let alone visited. But don’t for a second think that this stunning archipelago has nothing to offer. Adrift in the north Atlantic, the eighteen islands of the Faroes are a dramatic photographer’s paradise, and the small local population and quiet tourism scene here makes its landscapes all the more easy to capture.

The Faroe Islands is home to around 80,000 sheep, which outnumber the residents by 2:1 - but that’s not the extent of the wildlife here. Puffins peek out from the craggy cliffs, skuas plunge into ocean, and fulmars circle high above the rolling waves. The people of the Faroe Islands have subtly become one with the nature all around, too. Despite having all the modern touches you might expect from a semi-Scandinavian nation, colourful villages, charming lighthouses and cunning mountain tunnels blend in seamlessly, and they too will form part of this photography tour.

Over the course of this six-day photography adventure, we will be exploring the Faroe Islands’ scenic fjords, imposing mountains and dramatic coastlines, capturing all of the finest sights through the lenses of our cameras.

Two Professional photo guides.
All Transportation.
Accommodation in hotels and guesthouses. Rooms with private bathrooms.
Breakfasts during the tour.
Transfer from and to Airport. 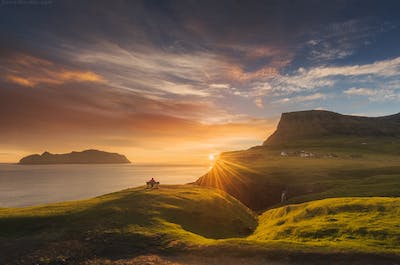 On the first day of the tour you will arrive at Vagar airport, on the west of the Faroes. We recommend that you fly from either Reykjavík or Copenhagen, which should be around a 1½ hour flight. You can arrive anytime you like, as long as it’s before 17:00. We will be staying overnight at Vagar airport hotel, but the plan is to have a meal together that evening. After dinner the photography tour will begin. First, we’ll head to the famous Gásadalur waterfall for sunset. It’s probably the Faroe islands most iconic sight, and is certainly a fitting start to a tour with plenty of scenic views in store. We will spend the first night at Vagar airport hotel.
Read more
Day 2 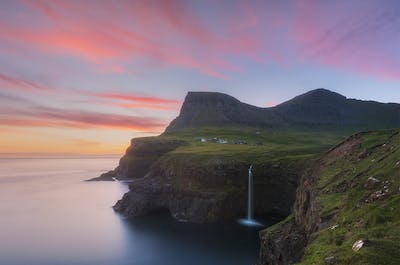 On day two the group will jump on a ferry after breakfast to Mykines island, where we’ll spend the day. Mykines is a tiny island with big character, and the group will take the time to capture the westernmost point of the Faroes, Mykines Holmur Lighthouse, which perches on a narrow headland, roaring waves on either side, like something out of a fairytale. The day will look something like this. After disembarking the ferry we will walk around Mykines village, before continuing on to the 100-year old lighthouse. It’s actually found on a separate island – Mykineshólmur – but there’s a narrow land bridge we will take. The hike out to the lighthouse normally takes an hour, but with plenty of stops for photography, it’s likely that we’ll spend three times that. As well as stunning sea views, our progress will be halted because of all the puffins that nest here in summer time! They’re especially friendly around here, so we can expect to get up close and capture some amazing shots. Besides puffins, there will be plenty of chances to capture both land and seabirds at close range, including oystercatchers, snipes, gannets, fulmars, arctic terns, arctic skuas, guillemots, curlews and kittiwake. As evening begins to draw near, we’ll board the ferry back to Vagar island. After dinner we’ll head out for a sunset shoot at the Tindhólmur islet in Bour village. We’ll spend another night at the Vagar airport hotel.
Read more
Day 3 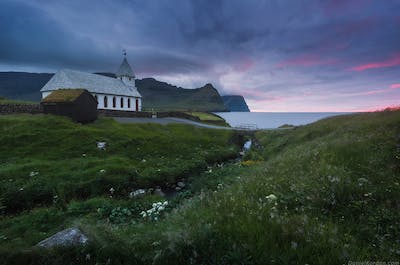 On day three of this Faroe Islands photography tour, we’ll rise early to for a hike to reach Leitisvatn as the sun comes up. Leitisvatn is a lake that sits on the edge of a cliff, and spectacularly falls into the open ocean below. It’s a one hour hike to the viewpoint, and you can bet that any early morning grumbles will soon melt away as the scene unfolds. If the weather isn’t suitable for a decent sunrise shoot, we will organise a later excursion and explore more of Mykines instead. After, the group will return to the hotel, check out, and head on towards our second base - the Gjogv hotel. To the north, Gjogv is a friendly and authentic village, offering the perfect base from which we can explore the north and east parts of the archipelago. These areas are also the most spectacular for sunrise and sunset shoots. After dinner on day three the plan is to explore Saksun village and set up there for a sunset photography session. The village itself looks like something out of Lord of the Rings, with grass growing on rooftops, a charming church, gentle waterfalls and a wonderful fjord backdrop. Our night on day three will be spent at the Gjogv hotel.
Read more
Day 4 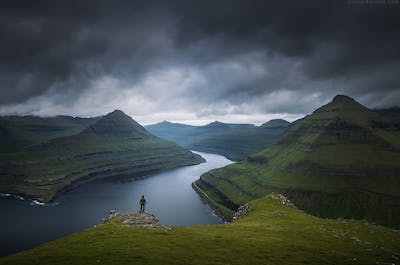 On day four the group will rise early once more and head out to shoot the sunrise at Funningur church. The church is sat right next to the waves, with a roof covered in grass - a quirky mixture of elements and religion! We’ll head back to the hotel for breakfast and have a rest before continuing on to Kalsoy island for the day. It’s something of a kingdom of sheep, so expect to see more furry friends than other tourists. There’s a 15km road to the small northernmost village and a hike to Kalsoy’s lighthouse from there. The walking part of the trip will take around one hour, and the gentle ascent is on a well-built path, so the group should be fine. Sunset on day four will be captured overlooking Vidareidi church, which represents the easternmost point of our entire trip. The church is overshadowed by a huge mountain and looks out on open water to the west, so is the perfect spot to watch the sun go down. We’ll spend another night at the Gjogv hotel.
Read more
Day 5 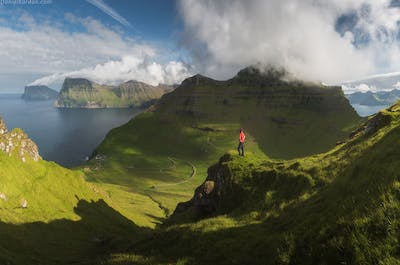 On day five we’ll have a decision to make, based on both the weather and the mood of the group. We can either have a sunrise session at Tjornuvik village, or hike to the beautiful mountains near to Gjogv. After sunrise and breakfast, we’ll take a day trip to Torshavn city. This is the capital of the Faroe Islands, and, located on the Tinganes peninsula, is also a spectacular location that has been home to the Faroese parliament since the 9th century. After exploring the capital, we’ll have another sunset shoot at Saksun village, before spending the night at the Gjogv hotel.
Read more
Day 6 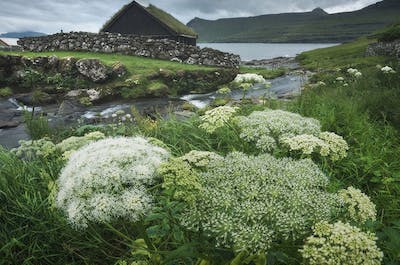 On day six the group will finally get a lie in! For those in the group that still have plenty of energy, you are more than welcome to wander round Gjogv and the surrounding area. We will aim to get you to the airport on Vagar island between 11:00 and 11:30 a.m. - so you can book your return flights accordingly. We’ll say our goodbyes and head home with plenty of memories, new friends, improved photography skills and countless incredible photos.
Read more

The tour will always dependent on weather, as the weather can be highly unpredictable.

Thomas Vikre is a Danish / Norwegian award-winning photographer based in the Faroe Islands, his work consists primarily of landscape, travel & fine art photography, but he also does a substantial amount of commercial work for local companies.

Thomas also guides for private clients, groups and photo tour companies visiting the Faroe Islands and has rapidly become a reference in the isles. Earlier in his professional career, he was involved in the airline & tourism industry. On a part time basis, he also worked as a production assistant on film sets and with TV commercials. In 2013 he decided to relocate to the Faroe Islands, a place he had visited on numerous occasions before. His work has been licensed to local tourism entities, guide books, to multiple business partners & to private customers.