Embark on an 8 day summer photography adventure to the long-forgotten Faroe Islands! This picturesque archipelago of volcanic islands situated in the North Atlantic Ocean between Iceland and Norway harbours many hidden gems for landscape and nature photography. From lush valleys and striking mountain peaks soaring high above the sea to waterfalls plunging directly from sheer cliffs into the tumultuous ocean below, this rugged and wild region has it all.

During summer, the days are long and the many hours of daylight afforded by the golden glow of the Midnight Sun mean that we'll be able to stay out immersed in the throes of nature deep into the late hours of the night. We'll spend our days exploring the scenic fjords, tiptoeing around puffins, hiking along breathtaking mountain ridges, chasing waterfalls and making the most of our time in this fairytale location.

This photography workshop is open to photographers of all levels. Throughout the tour, your photography guide will be on-hand to help you develop your skills in-field. They will share their immense amount of knowledge with you as they take you to the best locations for landscape and nature photography, monitoring the conditions at all times to ensure that you'll be able to take advantage of the extraordinary summer light.

The weather in the Faroe Islands is dynamic throughout the year, so you can expect to take home a range of dramatic, moody and atmospheric shoots. Improve your landscape photography in one of the most awe-inspiring destinations in the world! Check availability by choosing a date.

Professional photo guide
All transportation
Accommodation in hotels and guesthouses. Rooms with private bathrooms.
Breakfasts during the tour.
Transfer from and to Airport. 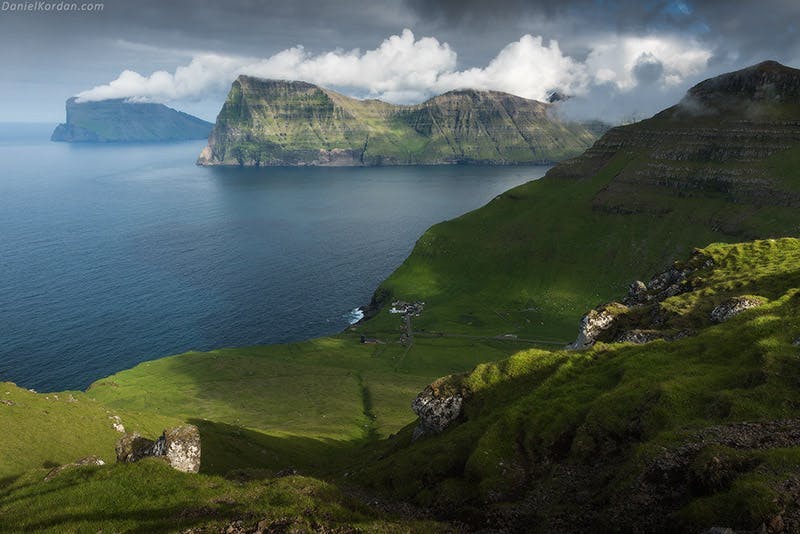 You'll arrive to the Faroe Islands and make your way from Vágar Airport to your hotel nearby. There will be some time to rest before you meet with the rest of the group in the evening for a delicious welcome dinner at a local restaurant. This is a great chance for you to get to know your fellow travellers a little better. You'll also have the opportunity to discuss the itinerary with your photo guide, who will go over the details for the days ahead.

You'll retire for the evening in Vágar. 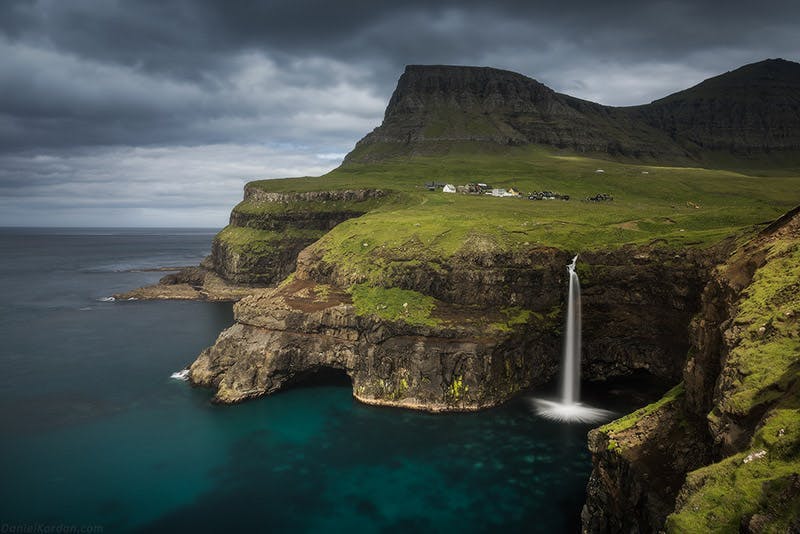 This is when the adventure truly begins! You'll rise early for breakfast, before heading out to your first destination – the beautiful village of Gásadalur. Surrounded by majestic mountains on all sides and lush green valleys, it makes for a spectacular sight, though is perhaps most well-known for the iconic Múlafossur waterfall that plunges from a cliff into the waves of the ocean below.

From there, we'll make our way to the stunning Lake Sørvágsvatn that appears to float high above the sea. A short hike will take us to a panoramic viewpoint, where we'll spend our time capturing the surrounds. You'll also catch sight of the incredible Bøsdalafoss waterfall, which flows in a surreal fashion from the lake directly into the Atlantic Ocean.

Our sunset session will be at the islet of Tindhólmur, where the jagged Drangarnir sea stacks reach into the sky. This is one of the most mesmerising places in the Faroe Islands and will make for breathtaking images. We'll photograph these epic rock formations from several angles as we make the most of the golden light. 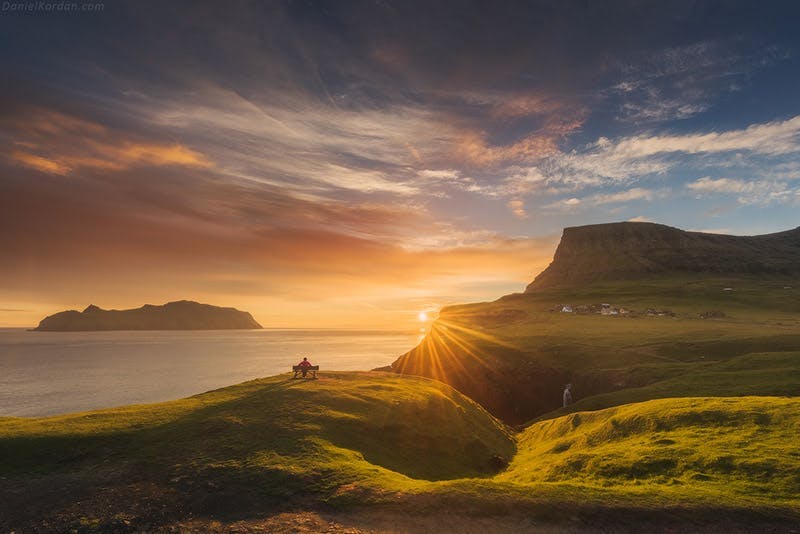 On day three, we'll rise early for a sunrise shoot, before returning to the hotel for breakfast. Thereafter, we'll catch a ferry to Mykines Island, the jewel of the Faroes.

This remote island is home to only 14 people throughout the year, though it plays host to thousands of seabirds nesting along its spectacular coastlines during summer! You'll have ample opportunities to photograph puffins, gannets, fulmars and kittiwakes as they dive from the black basalt cliff faces into the water on the hunt for fish.

The highlight of Mykines is the lighthouse at the end of a steep islet Mykineshólmur, which will take us about two hours. We'll be rewarded by an incredible view of the ocean waves crashing into the islet from all around. 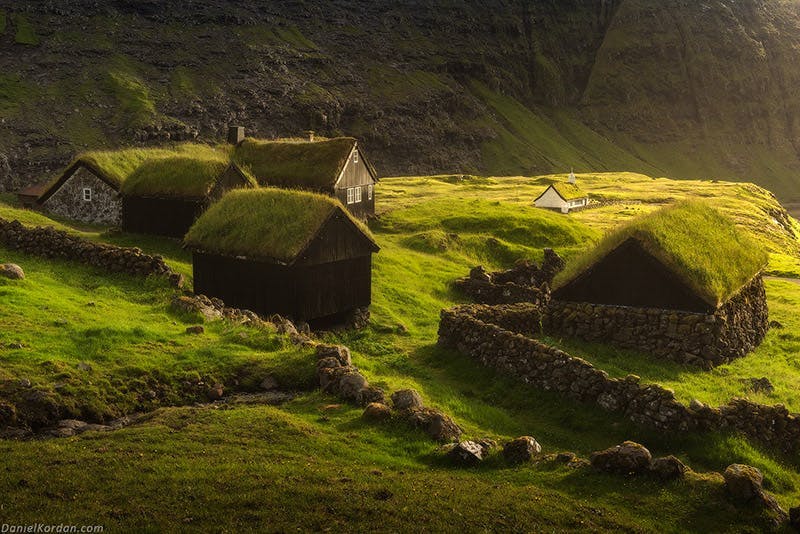 On day four, we'll visit Streymoy Island. This is the largest island in the Faroes and offers plenty of incredible landscapes for photography.

We'll spend a whole day exploring the island, visiting the black sand beach at the small village of Tjørnuvík and catching a view towards Eysturoy Island across the ocean. Next, we'll explore the charming turf-roofed houses of Saksun, dotted across the valleys and surrounded by stunning mountainous scenery. Nearby is the famous Fossá waterfall, tumbling from a height of 140 metres. It makes for a wonderful composition during sunset, as it drops in two tiers. 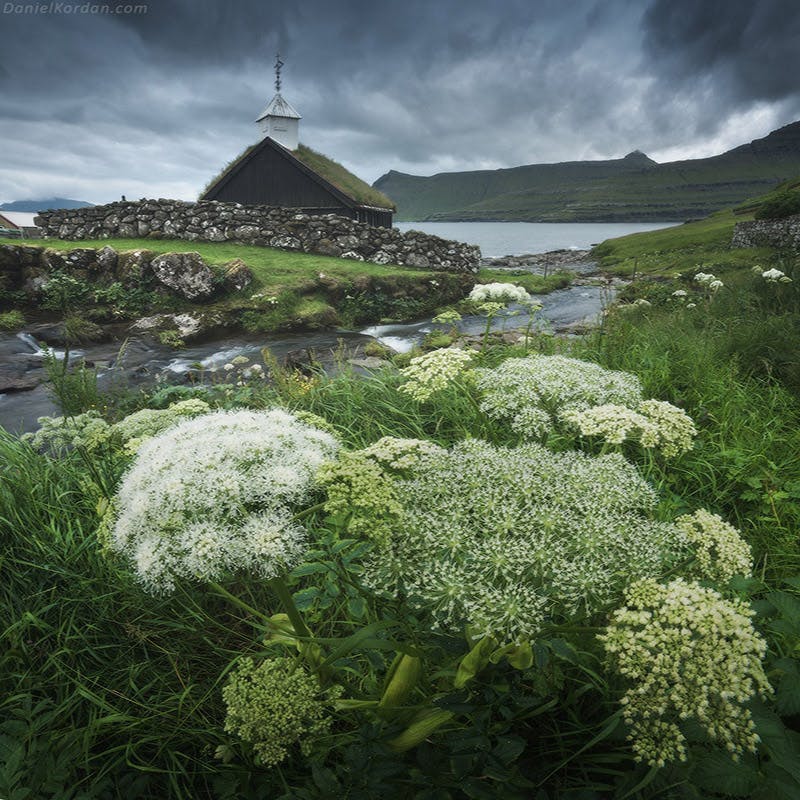 On day five, we'll move to Eysturoy Island, basing ourselves in the vibrant village of Gjógv. With quaint houses surrounded by lush vegetation on the backdrop of amazing mountains, this village offers a lot in terms of compositions and is a great base for the next few days of our trip.

After a long day of exploring the island, we'll journey to the village of Funningur for a sunset session at the old Funningur Church. With its grassy roof, wooden design and perfect position at the mouth of a fjord, this church is a stunning place to capture the last rays of blazing light as the sun skims close to the horizon. 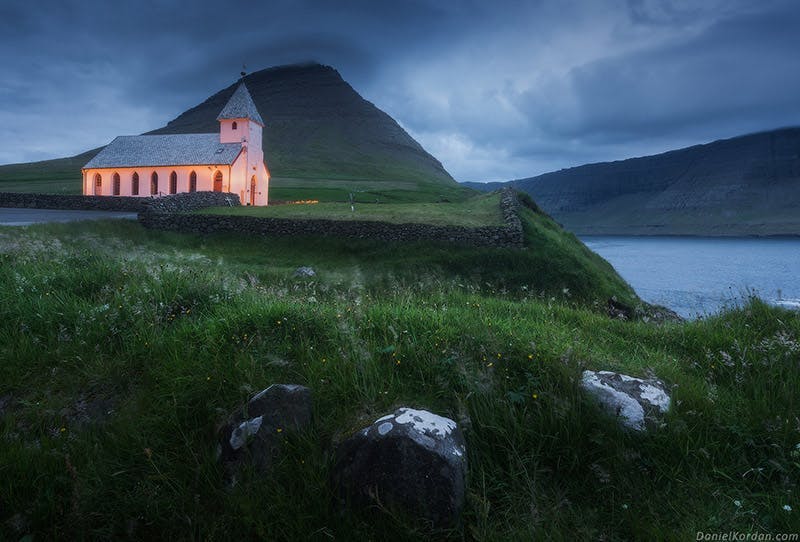 On day six, we'll rise early and take a ferry ride to the island of Kalsoy, where we'll witness one of the most iconic views in the Faroe Islands. An easy hike will take us to an astonishing viewpoint looking out towards the spectacular Kallur Lighthouse, dwarfed by the sheer cliffs surrounding it that reach towards the horizon of the sea. To the west, you'll be able to catch a glimpse of Eysturoy Island, while Kunoy and Viðoy islands lay to the east

In the afternoon, we'll visit the village Viðareiði to capture the beautiful sights of the surrounding cliffs from a panoramic viewpoint. There is a wonderful composition of the Viðareiði church to be explored, with a huge mountain in the background and the open water at its base.

We’ll spend another night at the Gjógv hotel. 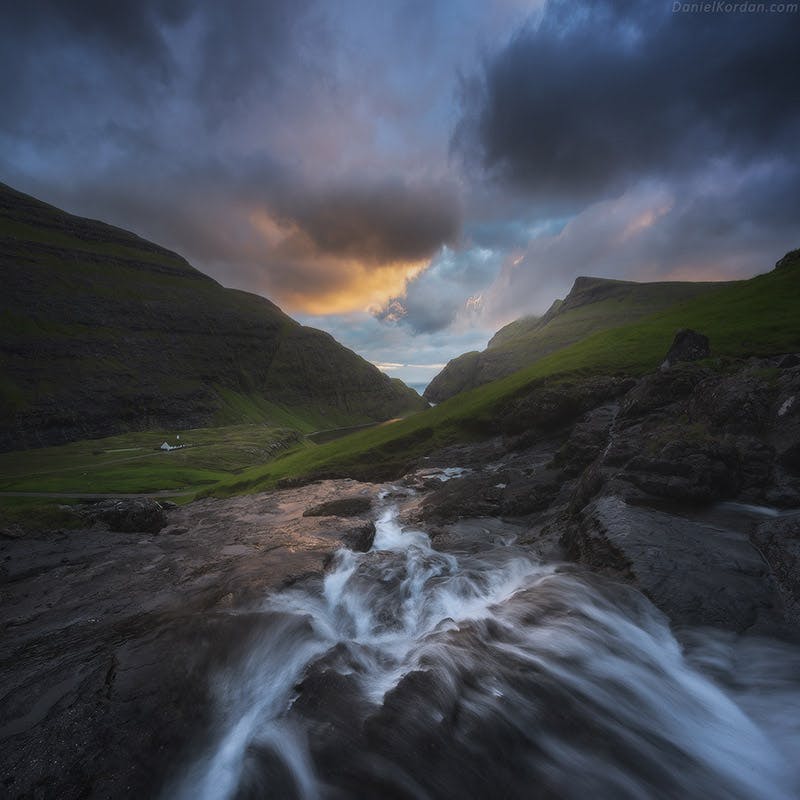 On day seven, we'll explore Borðoy Island, one of the northern islands in the Faroes archipelago. Scenic fjords make for stunning visuals here and we'll spend part of the day capturing the incredible mountains that surround the tiny village of Árnafjørður.

Later in the afternoon, we'll take a hike above the fishing port of Klaksvík, to a mountain ridge known as Klakkur. Along the way, there will be plenty of opportunities to photograph the rich birdlife, before we'll find ourselves faced with an exceptional view across the straits towards the Kalsoy Islands with the open water at our feet. It's a great place to take a mindblowing selfie as you stand seemingly at the edge of the world.

We’ll spend another night at the Gjógv hotel. 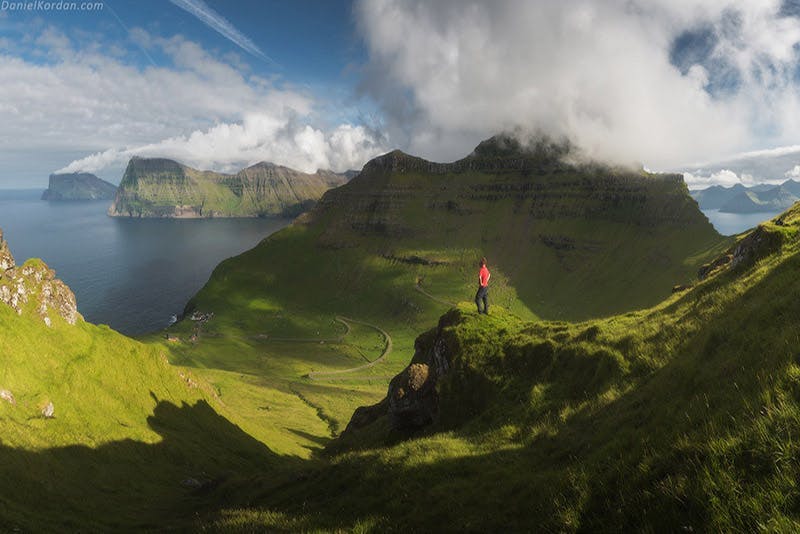 We highly recommend that you get a travel and medical insurance. Your own domestic medical insurance and private health scheme will not cover you whilst you are overseas. The tour is always dependent on weather, as the weather can indeed be highly unpredictable. Likewise, wildlife sightings are completely dependent upon the movements of the animals themselves and cannot be guaranteed.

Thomas also guides for private clients, groups and photo tour companies visiting the Faroe Islands and has rapidly become a reference in the isles. Earlier in his professional career, he was involved in the airline & tourism industry. On a part time basis, he also worked as a production assistant on film sets and with TV commercials. In 2013 he decided to relocate to the Faroe Islands, a place he had visited on numerous occasions before. His work has been licensed to local tourism entities, guide books, to multiple business partners & to private customers.