Capture the extraordinary colours of fall and chase the Northern Lights across the stunning surrounds of the Vatnajökull National Park during this spectacular 5-day autumn photography workshop in Iceland!

The south east of Iceland is an awe-inspiring place where enormous glaciers meet with mossy lava fields, soaringly high cliffs, vast black sand beaches and thundering waterfalls. You'll witness the pristine nature that Iceland's famous South Coast is well-known for as you make your way from Reykjavík in the country's west, all the way to the Jökulsárlón glacier lagoon and Diamond Beach in the east.

Along the way, you'll have countless opportunities to photograph Iceland's most magnificent scenery both on and off the beaten track as you immerse yourself in the vibrant fall foliage. Autumn is a wonderful time to experience the Land of Fire and Ice, when the days are shorter and the nights are darker, heralding the return of the Northern Lights dancing across the night sky.

You'll have four nights of pre-arranged accommodation, as well as transport in a spacious and comfortable vehicle throughout the tour, giving you all the more time to focus on what you do best. Be prepared to expand your landscape photography portfolio and to rapidly improve your skills as our expert photography guides share all of their knowledge with you, ensuring that you'll have a well-rounded experience both in-field and out. They'll keep an eye on the weather conditions and Aurora activity so that you can be in the best locations at all the right times to take advantage of the autumn light.

Don't miss out on the opportunity to immerse yourself in the Vatnajökull National Park of Iceland on this incredible 5-day photography workshop. Check availability by choosing a date.

Professional photo guide
Transportation in a comfortable vehicle
Accommodation in hotels and guesthouses. Rooms with private bathrooms.
Breakfasts at hotel stays during the tour 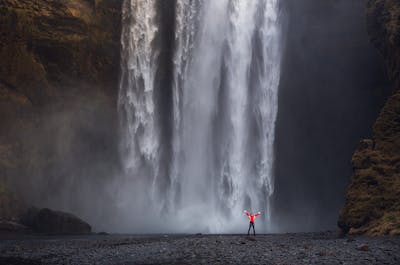 Day 1 - Reykjavik to the South Coast

On the first day of this autumn photography workshop in Iceland, you'll be picked up by your photo guide bright and early in Reykjavík. Thereafter, you'll commence the journey along the South Coast, to your eventual destination at the small fishing village of Vík. Along the way, you'll make regular stops to capture the incredible sights both on and off the beaten track, making the most of the gorgeous autumn scenery. Your first stop will be at the magical Seljalandsfoss waterfall, which tumbles from a height of 60 metres. It is one of the most picturesque sights in all of Iceland, with a walking path that encircles the curtain of water, allowing you shoot from behind it within a large, rocky cavern. From there, you'll make your way to the nearby Skógafoss waterfall. There are many compositions to be found here, from telephoto 10-second timer selfies to reflections within puddles and rainbows in the mist. It's a great place to practice using different shutter speeds, both to freeze the droplets of water as they crash to the rocks below or to create a silky, dreamy long exposure effect. After a delicious lunch, you'll then head onwards to Vík, though not without a stop first at the spectacular cliffs of Dyrhólaey. Here you will find a charming lighthouse, as well as grand, expansive views of the black sand beaches below with the famous Reynisdrangar sea stacks in the distance. Your sunset shoot will be at the Reynisfjara black sand beach, where powerful waves from the North Atlantic Ocean pound heavily upon the shore. There is a lot to explore along this picturesque stretch of coastline, including tall, basalt columns rising high into the sky and large caves with basalt structures resembling organ pipes. They make for a truly dramatic scene as the sun dips below the horizon, tinging the sky in sunset hues. After dinner, there will be some time to rest before you head out in the night to begin your first hunt for the Northern Lights. Your expert photo guide will keep an eye on the skies and monitor the Aurora activity to ensure that you'll be well-placed to capture them when they make their grand appearance. You'll spend the night at accommodation in Vík.
Read more
Day 2 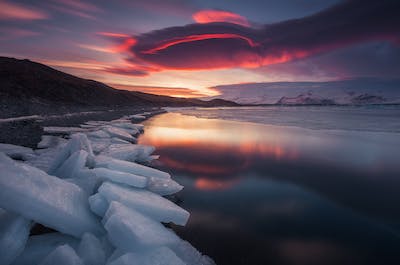 After breakfast on day two, you'll head out for a sunrise session back at the Reynisdrangar sea stacks, though this time you'll capture it from a different vantage point. The atmosphere here can change dramatically with the conditions, so be prepared to see the black sand beach in a whole new light. Thereafter, you'll continue the journey towards the Jökulsárlón glacier lagoon, within the heart of the Vatnajökull National Park. There will be a lot to photograph along the way, including snowcapped mountain peaks and glistening glaciers framed by burnt orange and yellow vegetation. Your sunset shoot this evening will be at the Jökulsárlón glacier lagoon, a temporary resting place for large white and blue-tinged icebergs that have calved from the nearby Breiðamerkurjökull glacier. The still waters here make for breathtaking reflections of the clouds in the sky, turned red by the sunlight. This lagoon is also home to a variety of bird life and seals, so be prepared to exercise your telephoto lens to capture the wildlife. Once the sun has set, you'll check in to your accommodation nearby and have some dinner. Don't rest that camera for too long though, as you'll be right back out chasing the Northern Lights over the Jökulsárlón glacier lagoon if the conditions are favourable. If not, then you'll settle in for a photo review and editing session with your photo guide, who will share their post-processing knowledge with you and provide valuable feedback to help you improve upon your skills. You'll retire for the night to your accommodation in the vicinity.
Read more
Day 3 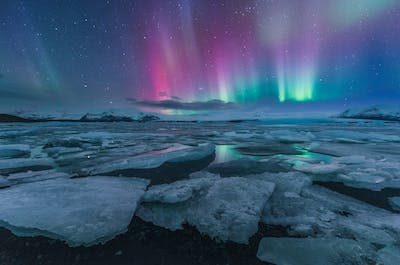 Day three begins with an exhilarating sunrise session at the enchanting Diamond Beach. Aptly named for the icebergs that wash ashore and which resemble jewels in the sunlight, this beach is a veritable playground for photographers. There's no doubt that you'll have an exciting morning as you chase the waves receding around and between the icebergs. Don't be afraid to get your feet a little wet, as we will supply you with rubber boots for the duration of the shoot. The rest of the day will be spent exploring the Vatnajökull National Park, visiting some well-known locations as well as a few hidden gems off the beaten track. Where you go will depend largely upon the conditions, though you can rest assured that your guide will take you to the best places to make the most of the autumn light. A possible sunset location is the little-known Fjallsárlón glacier lagoon, situated right next to Jökulsárlón though less-visited and all the more charming. You'll have endless opportunities here to look for abstract patterns in the ice with the glacial tongue looming in the background. Once again, if the Northern Lights make an appearance in the sky, you'll stay out late into the night capturing them with a myriad of wonderful compositions, before returning to your accommodation in the area for the night.
Read more
Day 4 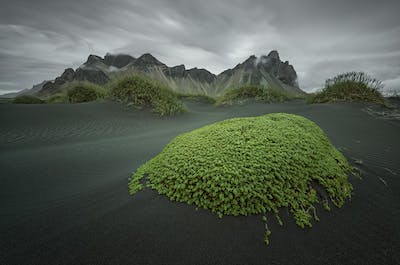 On day four, you'll have another chance to perfect the art of shooting at the Diamond Beach and the Jökulsárlón glacier lagoon. The icebergs take on different moods and can appear to be dramatically different beneath the dynamic autumn light, offering new and exciting compositions at every turn. The rest of the day will be spent exploring the rugged beauty of the Skaftafell Nature Reserve. This protected wilderness area is home to dense vegetation, stunning waterfalls and the raw, pristine glacier tongue known as Svínafellsjökull. It's the perfect chance to capture history in the making as you get up close and personal with the calving face of the glacier, with its many white and blue crevasses sprawled heavily between mountain peaks. Again, your sunset session will depend largely upon the conditions though your guide will keep an eye on the weather and take you to the best location to make the most of the fading light. If conditions are favourable, then you may visit the rugged peaks of Vestrahorn mountain, where windswept vegetation is interspersed by glorious black sand dunes. It makes for the perfect subject framed by the Northern Lights in the night sky. Once you've had your fill of chasing the elusive Aurora Borealis, you'll return to your accommodation within the vicinity for some much-needed rest.
Read more
Day 5 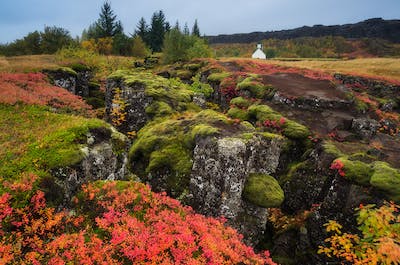 Day 5 - Golden Circle and back to Reykjavik

This will be your final day of shooting and if you haven't yet managed to master photography at the Diamond Beach by now, then it's your last chance to do so. After breakfast, you'll return to this magnificent stretch of coastline to capture the waves receding around these spectacular, icy sculptures. Thereafter, you'll begin the long drive back to Reykjavík, with a detour through the famous Golden Circle route. Depending on the weather conditions and time-permitting, you may make a stop at the enchanting glacier-carved canyon known as Fjaðrárgljúfur. About 2 kilometres long and with a depth of 100 metres, these mossy cliff walls date back to the Ice Age and resemble a feather when seen from above. As you get closer to the Golden Circle, you'll notice the landscape changing as you enter the hot geothermal zone of Geysir. This area is seething with volcanic activity and you'll bear witness to it as the steam rises beneath your feet, culminating in the exploding fountain geyser of Strokkur! Nearby is Gullfoss, an impressive tiered waterfall that offers magnificent views from a number of different angles. Here you will find a a path that takes you as close as you can get to the massive, thundering rush of water, so be prepared to get a little bit wet! Last but not least, you'll make a final stop at the Þingvellir National Park, a rift valley caused by the slow but ongoing drift of both the Eurasian and North American tectonic plates. The moss and vegetation here can take on brilliant, vibrant hues during fall, interspersed with lovely deep lakes filled with incredibly clear water. Your sunset session will be at the charming Öxarárfoss waterfall within the heart of Þingvellir, flowing over the cliffs of Almannagjá gorge into a rocky pool below. Once the sun has set, you'll continue on your way back to Reykjavík, reaching the capital just in time for dinner. Thereafter, you'll be free to rest or head out with your newly-made friends for a final night on the town to celebrate a fun-filled autumn adventure in Iceland!
Read more

- We offer small group tours with a maximum group size of 10-14. This way, you’ll get to know your photography guide and we can take you to shoot in unique places that aren’t suitable for larger groups.