Capture the beautiful fall colours of Iceland and chase the Northern Lights within the wild and unforgettable Vatnajökull National Park! This 4-day autumn photography workshop will have you immersed in the stunning sights of the famous South Coast, Diamond Beach, Jökulsárlón glacier lagoon and the breathtaking Skaftafell Nature Reserve.

Autumn is a wonderful time in Iceland, when things are beginning to wind down for the long winter ahead. The days become shorter and darkness returns to the night, creating the perfect recipe for hunting the Aurora Borealis.

The south eastern part of Iceland is where you will find a diverse landscape dotted with thundering waterfalls, volcanic black sand beaches, dramatic cliffs, spectacular coastlines, jagged mountain peaks and incredible glacial tongues amidst a myriad of shooting opportunities. During this tour, you'll visit some of the more iconic landmarks as well as hidden gems situated well off the beaten-track. They make for fascinating foregrounds beneath the atmospheric display of the Northern Lights.

You'll have three nights of pre-arranged accommodation for the duration of the tour, as well as spacious and comfortable transportation to all of your shooting locations. Throughout the workshop, your expert photography guide will take you to all of the best places for landscape photography in Iceland, keeping an eye on the weather and lighting conditions to ensure that you'll be well-placed to capture the very best images. They'll share their wealth of knowledge with you to ensure that you'll have a rounded experience, from learning how to use your camera in-field to mastering post-processing techniques which will no doubt be a valuable addition to your repertoire of skills.

Whether you are just picking up a camera for the first time or you're a professional photographer seeking to expand your photography portfolio, this workshop will take you to the very heart of all the various stunning highlights within Vatnajökull National Park and more.

Make the most of your trip to Iceland with the opportunity to photograph the country's gorgeous landscapes, tinged by the earthen hues of fall! Check availability by choosing a date. 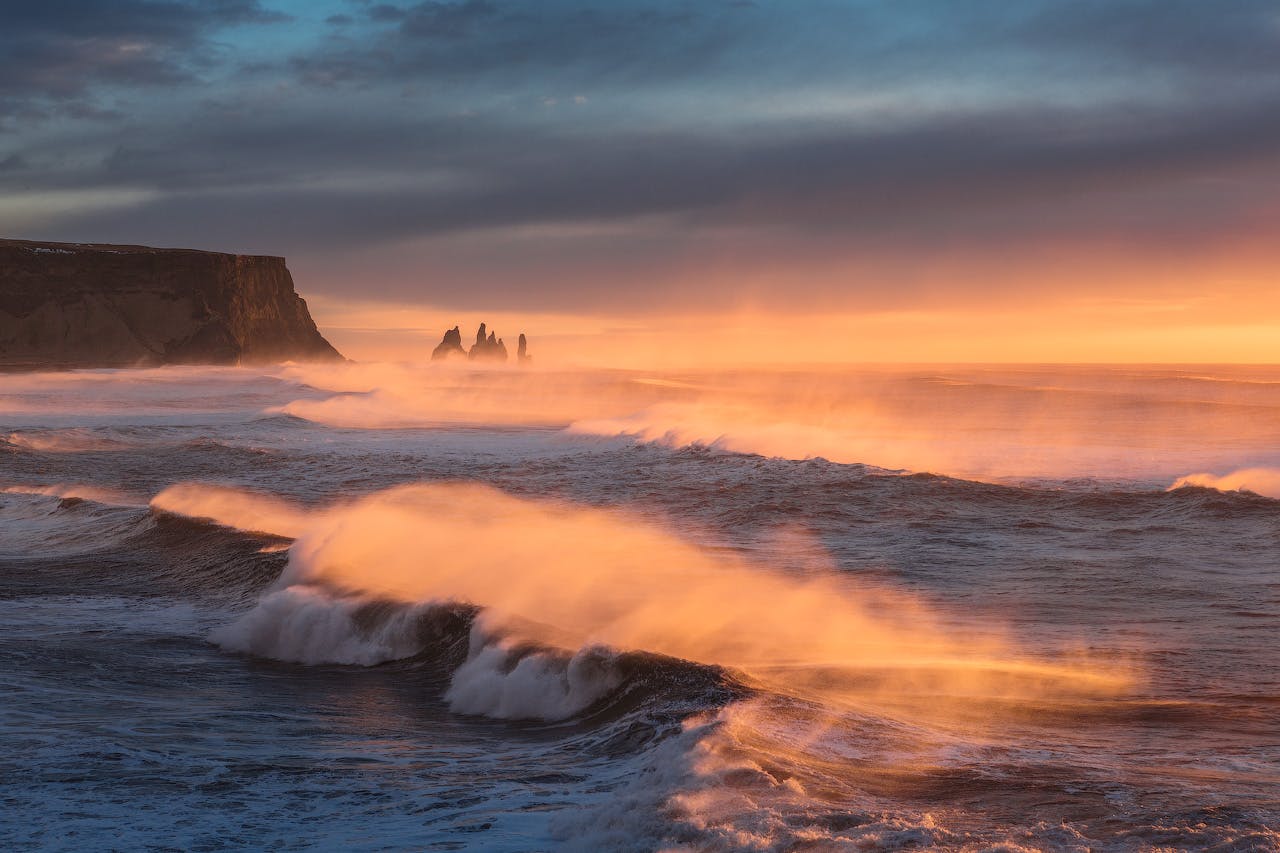 The adventure begins when you are picked up in Reykjavík. From there, you will make your way to the stunning South Coast of Iceland and eventually continue onwards until you reach the vicinity of the Jokulsarlon glacier lagoon in the south east. The journey will take approximately 5 hours, though there will be plenty of shooting opportunities along the way. Your first stop will be at the unique and fascinating Seljalandsfoss. This stunning waterfall originates from Eyjafjallajökull, a volcano deep beneath a glacier that was responsible for disrupting air traffic across Europe during eruptions in 2010. Dropping from a height of around 60 metres into a narrow river below, Seljalandsfoss makes for a picturesque sight. There are numerous compositions to be found amidst the foliage and vegetation that surrounds this cascade – you'll even be able to capture a spectacular shot from a vantage point within a cavern behind the waterfall. Nearby is the famous Skógafoss waterfall, where rainbows reign supreme. Whenever there is sunlight, there is the possibility of witnessing a rainbow rising forth from the spray that drifts off this thundering wall of water. You can walk right up to the base of this waterfall though you may come away a little wet! It's a great location to practice shooting with a telephoto lens and utilising a person for a sense of scale. After a quick lunch, you'll continue onwards to the small fishing village of Vík, taking in the spectacular Dyrhólaey cliffs and Reynisfjara black sand beach along the way. The Reynisdrangar sea stacks make for spectacular images, framed by tall basalt columns on the left and the wild, tumultuous waves of the North Atlantic Ocean on the right. From there, you'll make your way from the South Coast towards the Vatnajökull National Park, arriving at your accommodation by the evening. Depending on the conditions, there may be the opportunity to chase the Northern Lights tonight, otherwise you'll have some time to work on your images from the day with valuable feedback from your guide. You'll spend the night in accommodation nearby.
Read more
Day 2 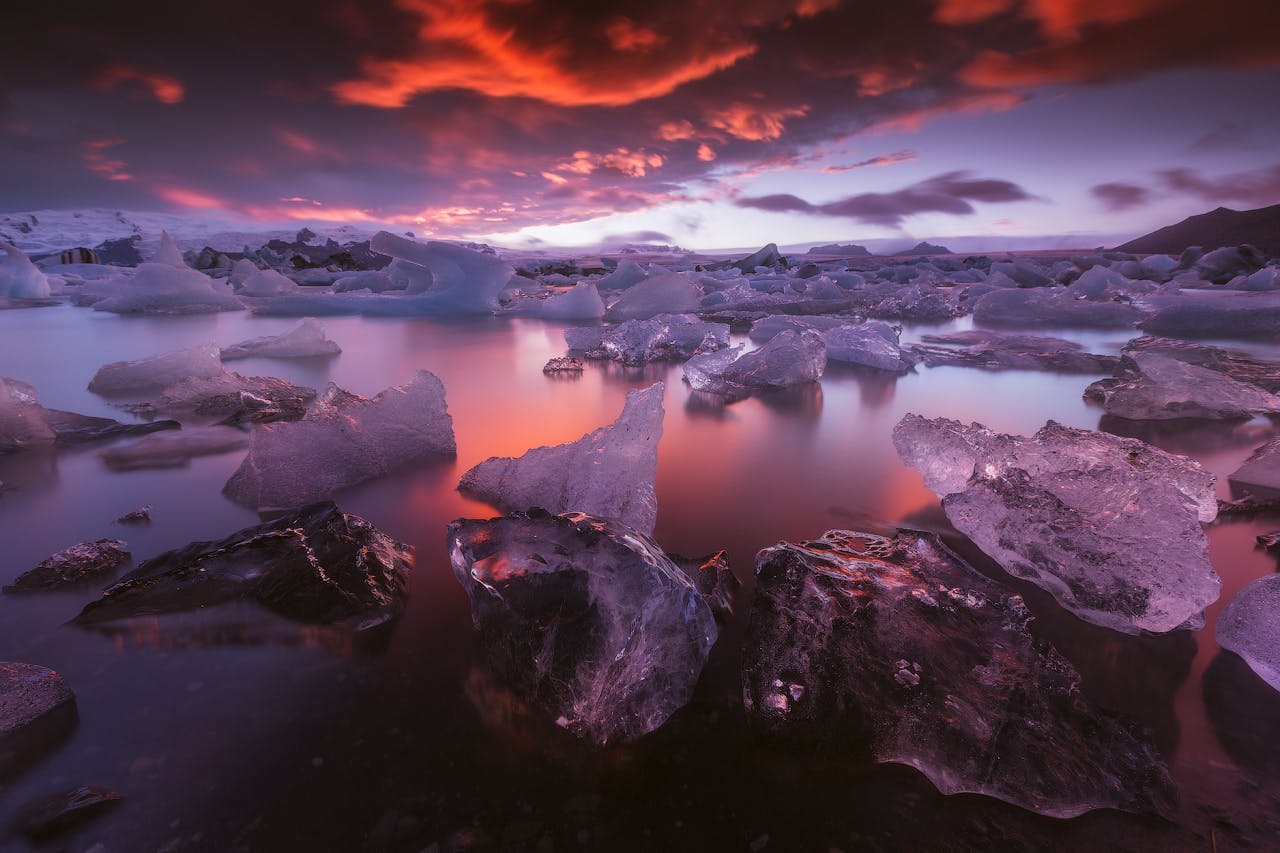 On the second day of your adventure, you'll rise early for a sunrise session over the Jökulsárlón glacier lagoon. This is where large icebergs that have calved from the nearby Breiðamerkurjökull glacier float serenely, before making their way through a narrow canal towards the ocean. The lagoon is home to a variety of wildlife including sea birds and seals. It's the perfect place to whip out that telephoto lens you've been carrying around and to put it to good use! Adjacent to the glacier lagoon is the Diamond Beach, where the icebergs eventually wash ashore. Your first session shooting on this dramatic stretch of coastline may be tricky, though you'll get the hang of it soon with another opportunity to return the next day. The adrenaline rush that you'll get from weaving between the icebergs as the waves circle them and withdraw back to the ocean is a once-in-a-lifetime experience, made all the more exciting by the changing lighting conditions. They can cast a different atmosphere entirely upon this very special scene, making your images even more unique. Depending on the conditions during the day, your photo guide may take you to a few lesser known locations within the vicinity, as you make the most of the fall colours within Vatnajökull National Park. From snowcapped mountains to hidden glacier lagoons and waterfalls, there is a lot on offer so prepare to capture some truly memorable images. Possible shooting locations include the jagged mountain peaks and undulating black sand dunes at Mount Vestrahorn, as well as the glistening ice at the edge of Svínafellsjökull glacier. In the evening, if the Northern Lights dance across the night sky, you'll be perfectly placed to photograph them in all their glory as they reflect in the deep waters of the Jökulsárlón glacier lagoon. You'll spend your second night in accommodation within the vicinity.
Read more
Day 3 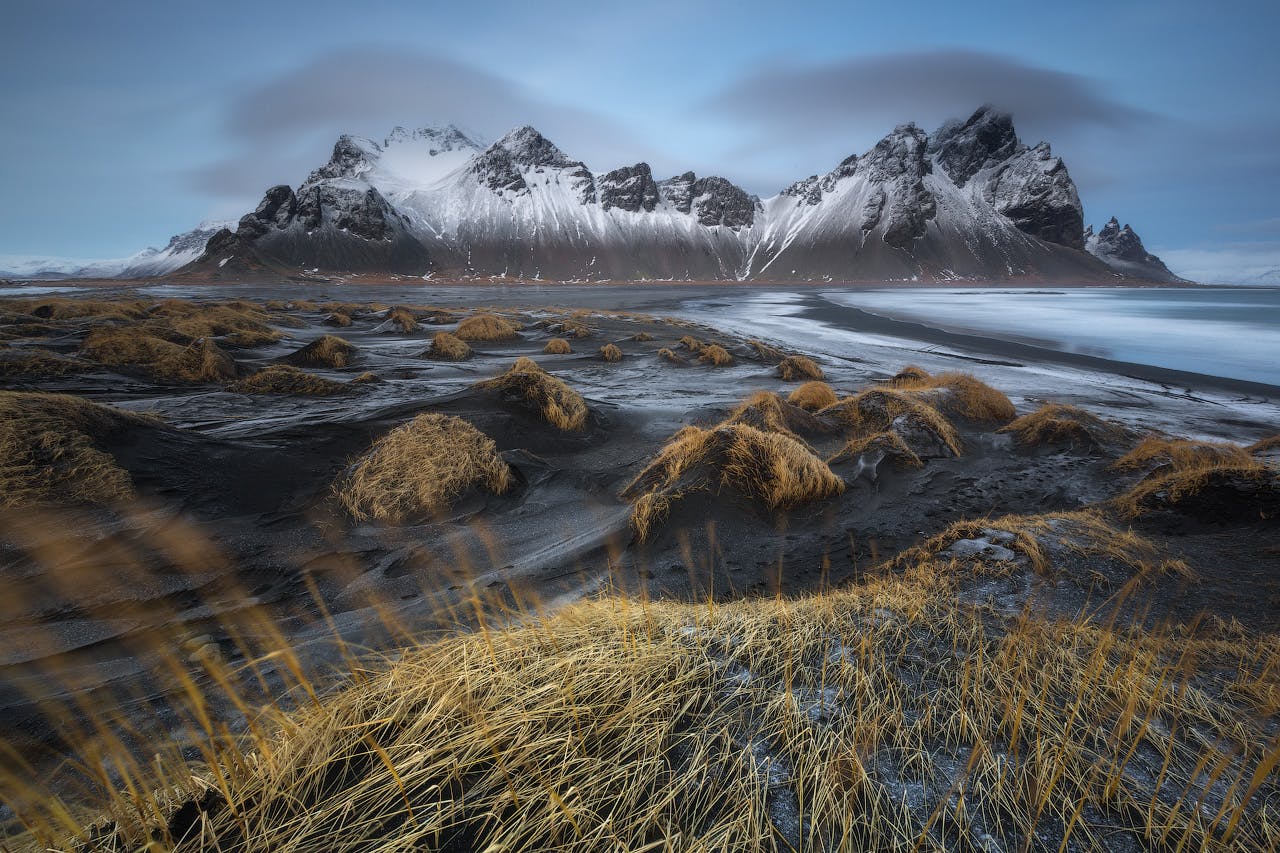 On day three, you'll rise for an early-morning sunrise session back at the Diamond Beach and Jökulsárlón glacier lagoon for another opportunity to hone your craft. The exhilaration of dodging the waves whilst capturing spectacular images of the water receding around the icebergs will surely have you wide-awake in no time! Thereafter, there will be the chance to explore several sites within Skaftafell Nature Reserve and the rest of the Vatnajökull National Park. If the weather conditions were not favourable yesterday, then today may be when you revisit certain locations for a second-chance at capturing glorious images. As you make your way back to the fishing village of Vík on the South Coast, there may be the opportunity to stop off at the lush, green feather-shaped canyon known as Fjaðrárgljúfur, or to capture the waves pummelling the Reynisdrangar sea stacks from a different vantage point. In the evening, you'll train your eyes towards the skies once again, in search of the Northern Lights. You'll spend the night at accommodation in Vík.
Read more
Day 4 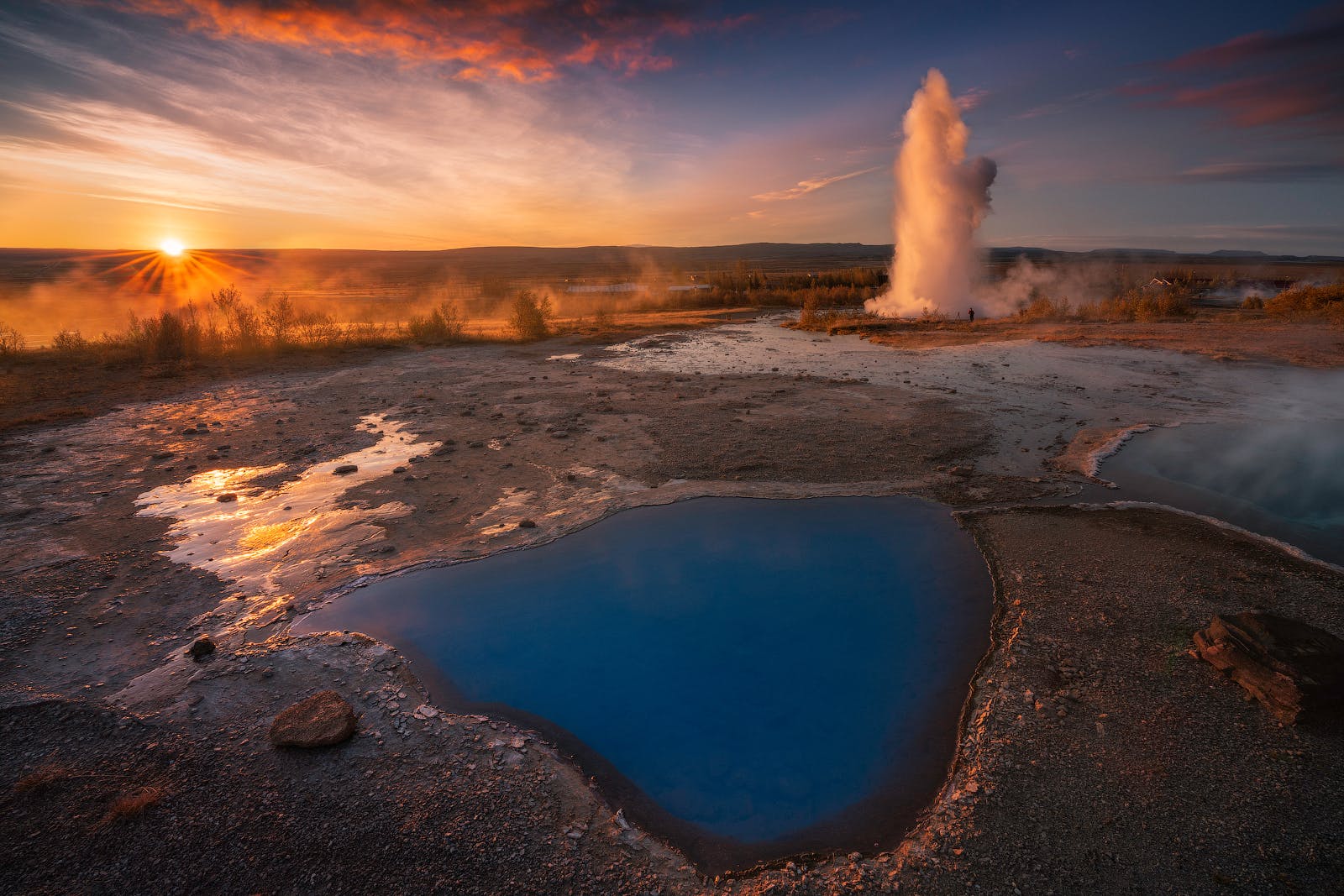 Day 4 - Golden Circle and Back to Reykjavik

This will be the final day of your adventure and it is sure to be packed full of photographic opportunities! After an early breakfast, you'll check out of your hotel for a sunrise session at the Reynisfjara black sand beach. From there, you'll then begin the journey back to Reykjavík, with a slight detour through the magnificent sights of the Golden Circle route, including Þingvellir, Gullfoss and Geysir. At Geysir, you'll be able to witness the very reason why Iceland is nicknamed the 'Land of Fire and Ice'. This is where hot springs bubble forth from the Earth in an exciting explosion of geothermal activity. The highlight will be that heartstopping moment when you capture the fountain geyser of Strokkur, spewing hot water up to 20 metres into the sky! From there, you'll make your way to Gullfoss. Its name translates to 'golden waterfall' and you'll soon see why. If the sun comes out, the tiers of this incredibly powerful waterfall light up in a truly magnificent way, resembling a rush of gold as the water flows down sheer cliffs into a canyon below. Eventually, you'll arrive at Þingvellir National Park, a site of historical and geological significance. Here, you'll bear witness to the incredible continental drift between the Eurasian and North American tectonic plates, characterised by a series of fissures, rivers and ponds. There are numerous compositions to be found here, including an expansive view over Þingvallavatn – a rift valley lake that is the largest natural lake in Iceland – as well as the charming Öxarárfoss waterfall, surrounded by dark cliffs. You'll reach Reykjavík by evening, just in time to head out on the town for dinner – no doubt with memory cards filled to the brim with photos to remember an amazing autumn photography adventure in Iceland!
Read more