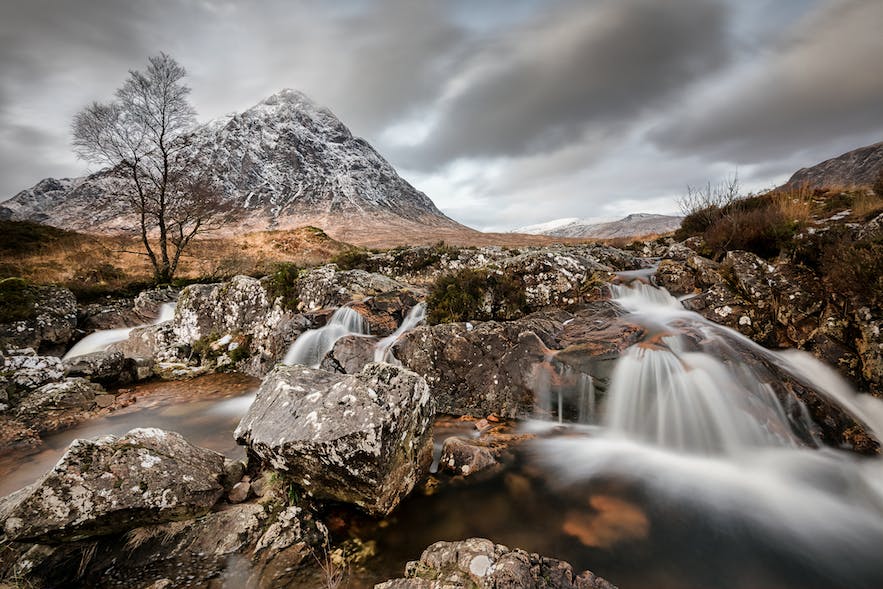 A little while ago, I was excited to be returning on another photography trip to the picturesque Scottish Highlands. There was only one slight problem: I'd just fractured my leg!

It was the result of an unfortunate misadventure that could have been much worse, so I counted myself lucky. However, I was due to head to Glencoe where I would meet my fellow photographer, Phil Buckle, in just a couple of days.

Our photo tour of Scotland had been planned for months and suddenly, I'd found myself hobbling, grimacing, and munching on the maximum dose of over-the-counter painkillers. Well, I had always thought my tripod would come in handy as a makeshift crutch so it was time to test that theory, I guess.

I knew that if I missed this trip, I would have to wait another 12 months for a chance to visit the Scottish Highlands during the 'Goldilocks' period for landscape photography; that is, the few weeks where conditions are optimal. Phil had visited the area around the same time the year prior, snapping a photo which resulted in him receiving a UK Landscape Photographer of the Year awards commendation. As such, I was keen to join him this time and not be stranded at home.

Why You Should Visit the Scottish Highlands in December

The start of December in the Scottish Highlands is an amazing time to visit and ticks many boxes for landscape photography. With 7-8 hours of daylight, it is easy to shoot sunrises and sunsets every day. You'll have multiple chances to get some lovely colour in the sky and visit several locations throughout the day, while still getting a solid night's sleep to start fresh the next morning.

In December, the weather in the Scottish Highlands is mild during the daytime as winter hasn't set in, though there's a decent chance that there will be a dusting of snow on the mountaintops, adding character and contrast to the scene. During our visit, we found that tourists were few and in many locations, we had the incredible vistas all to ourselves.

With so many options for photography close by, particularly in Glencoe, it gave us a chance to revisit key locations that we wanted to re-shoot as the conditions changed.

Of the many world-class photography locations in Glencoe, the iconic Buachaille Etive Mor waterfall is an incredible spot that has featured in many photography portfolios, including that of Pete Rowbottom who won UK Landscape Photographer of The Year in 2018. His photo depicted a dramatic composition of fractures in the ice with Buachaille Etive Mor in the background.

Inspired by this shot, Phil and I visited Buachaille Etive Mor though were unsuccessful with the conditions on the day. Luckily, there was some overnight snow on the mountain, so we headed back for sunrise the next morning. Thankfully for my injured leg, the location was easy to get to and close to where we parked.

After a 3 minute hobble, I unpacked my gear and tried in vain to balance on one leg. The scene was vastly different from the previous day, with snow highlighting the peaks of Buachaille mountain. Even the waterfall seemed to be more lively from the snow-melt. I was restricted in my choices for compositions due to my leg injury, as I wasn't keen to venture into a large muddy patch and risk a fall, or slide down the bank on my butt to get a low shot by the river and then have to crawl back out.

Technical Aspects of this Shot

Camera technology has made amazing strides in the past few years, with significant improvements in the dynamic range of camera sensors. In addition, post-processing techniques have enabled the blending of images, so that you can take the best parts of a series of shots and 'blend them together in post' for the perfect photo.

Despite this, I prefer to use filters to achieve the shot in-camera without manipulation. This also gives me the ability to spend more time shooting and less time on the computer.

So after a couple of test images, I decided that it was time to have a play around with my filters.

One thing that can't be replicated digitally entirely as yet is the effect of a polarising filter.

For this photo, I used a polarising filter to reduce the strong highlights and glare from the reflections on the water. I rotated the polariser so that the main body of water on the right had the maximum polarisation (reduced glare), while the small stream on the left side of the frame received less of the polarising effect.

Keep in mind that when you use a polarising filter, you can also increase colour saturation and decrease the amount of light reaching your camera's sensor by around one f-stop, which may either be an advantage or a disadvantage. In my case, it was a positive effect, as it allowed me to increase the shutter speed in order to capture the movement of the water.

Another thing to be mindful of when using a polarising filter is that you may encounter problems with it when using an ultra wide angle lens. The effect may not be uniform throughout the frame.

The next layer of the filter system that I decided to use was a graduated neutral density filter (or ND Grad filter). They are used to darken skies as they transition from dark to clear across the filter, thus allowing the scene to be captured in a single shot without blowing out the highlights. This gives you the ability to capture more detail in the landscape, rather than excessive dark shadows with significant noise.

ND Grads come in a variety of differing strengths, as well as amount of gradient across the filter.  For example, "hard" grads may be used with a relatively flat horizon line, while "reverse" grads are great for sunrises and sunsets where the horizon line is significantly brighter than the sky above.

The most common ND filters in landscape photography are the "soft" grads, where the darkness transition isn't as sudden,. They are perfect for using with an undulating horizon without drastically impacting features such as mountains or buildings too strongly.

For this photo, I decided to use a "soft" 3 stop ND Grad to gently balance the exposure.

The final layer of the filter system that I used for this shot was a neutral density filter (or ND filter). It allowed me to be able to reduce the shutter speed to get the milky effect of the water flow.

The most common strengths of ND filters available are 6 stop and 10 stop. In this case, a 6 stop ND filter was required due to the light not being particularly strong on the overcast day.

Full strong sunlight may have required a 10 stop filter to reduce the shutter speed to the desired level. Increasing the aperture was an option too, though I decided against this as it could lead to decreased sharpness due to light diffraction within the lens.

If I didn't use an ND filter for this shot, then I would have needed to shoot at an aperture of f/22 or beyond to capture the same amount of softness.

Are you ready for an adventure in the magical Scottish Highlands? Join Dion and Phil on this 8-Day Photography Tour of Scotland, which will take you to the best locations for photography that this extraordinary country has to offer.