Drangey is a small island rock surrounded by ocean streams and is hence a challenging place to visit. Sitting in the middle of the fjord Skagafjörður in the northern region, it is a landmark that often goes unnoticed.

The most apt name for this island is a rock, as the top plateau sits upon 200 metres of straight vertical cliffs on all sides. It is not only a unique geological phenomenon but is also integrated into the history of Iceland, as far back as the times of settlement in the 9th century. Drangey rock is home to hundreds of thousands of birds of many different species. It has all the elements of a good location to visit for anyone adventurous and specifically for landscape photographers or nature enthusiasts.

One the Way to the Top

Visiting Drangey is an adventurous experience. The path up to the top is rather steep and is probably difficult to climb for those who are scared of heights. It is a narrow path and at one point, you need to hang on to a rope fixed to a cliff. You also need to climb steep steps near the top.

On the way up, the view is spectacular and continues to get better the higher you get. There is a wonderful view of the fjord and the mountains around Skagafjörður fjord, as well as the cliffs with their ravines and landforms. In addition, the spectacular birdlife is a major drawcard for photo opportunities from several angles and viewpoints.

Among the birds that live and nest at Drangey are the famous puffins. So even on the way up, there are many opportunities to photograph them. 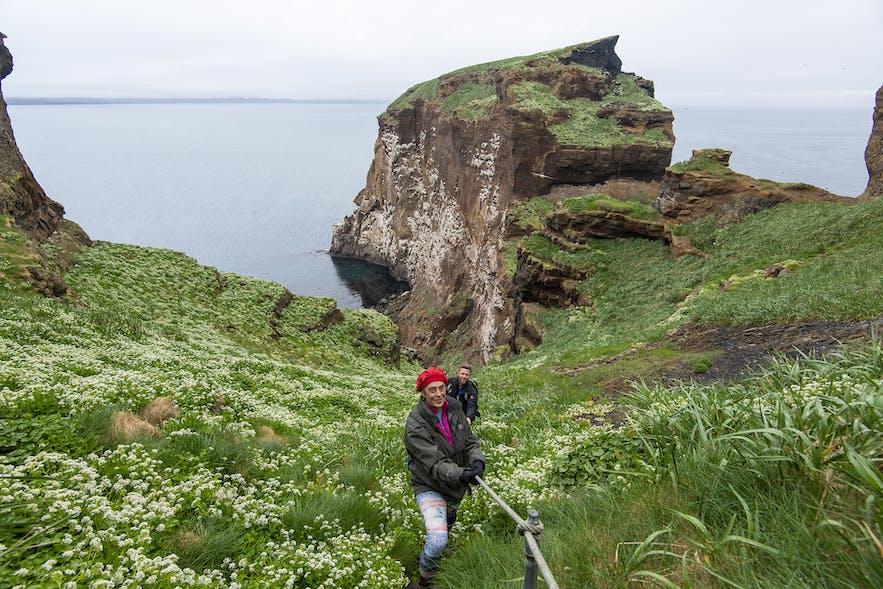 Climbing up the 200-meter cliff is only possible at one place. Photo by: 'Einar Páll Svavarsson'.

The Outlaw who Lived on the Rock

In medieval times, Icelanders wrote the Sagas, one of the most valuable inheritances of this small country. One of the most hilarious sagas is about the Grettir, the strongest man ever to live on the island.

Grettir was not only big and strong but was also a difficult and vicious individual who, early on in his life, committed crimes against fellow humans, fought ghosts, and was at odds with most everyone else. Consequently, Grettir became an outlaw. He had to hide from the authorities and almost everyone else as he could be killed by anyone without consequences.

What better place was there to hide than Drangey, which at that time, was even harder to climb than today? It was a place that was packed with birds and where you could sustain yourself living for months. So, it was a kind of reverse to Alcatraz, as Grettir was a convict and an outlaw who used the island as a place to hide from authorities. But, in the end, the establishment was victorious and Grettir was killed on the rock. 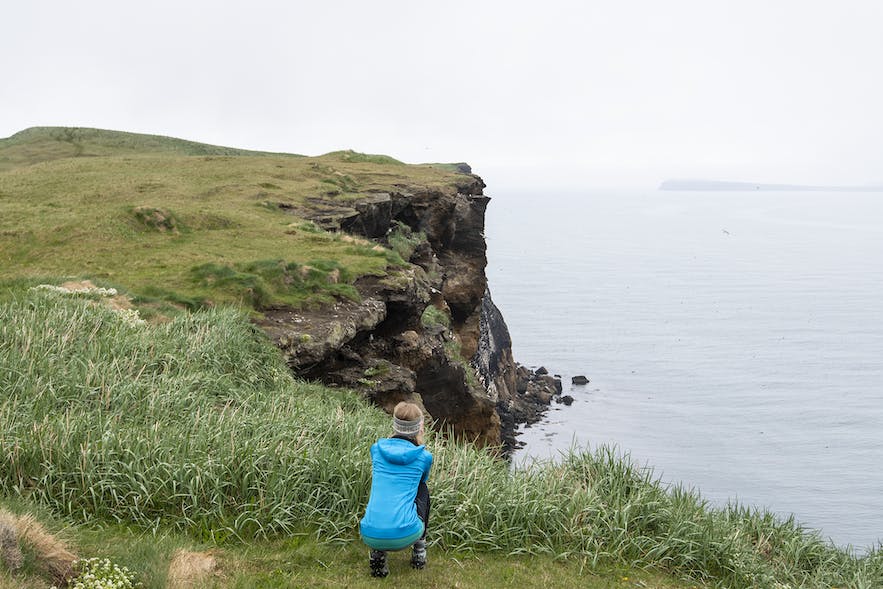 There are many photo opportunities on top of the rock as well around the island. Photo by: 'Einar Páll Svavarsson'.

Photography at Drangey Rock and How to Get There

If you enjoy learning about and understanding the subject that you intend to photograph, then Drangey is a great place to visit and spend a day. There is one tour operator, Drangeyjarferðir, and you can easily ask them to sail around the island. It only takes about 20 to 30 minutes, but gives you an excellent opportunity to take great shots of the rock with the fjord and the ocean as a background.

The surrounding area is generally packed with birds, as are the cliffs. A good and fast telephoto lens is a joy to have as part of your camera equipment while sailing around Drangey.

One possibility is to take a tour in the morning and to stay at the top of the island for a few hours. You can then walk around from the southern part to the northern part, photographing the cliffs and wildlife. In the afternoon, you can take the boat back. One of the best parts about staying close to this area is that at the end of the day, you can dip into the geothermal pool, Grettislaug, which sits just by the pier.

Learn more about landscape and nature photography in Iceland! Check out our range of free photography articles for some inspiration.